1851 Vuillemin Folding Map of the World on Mercator's Projection 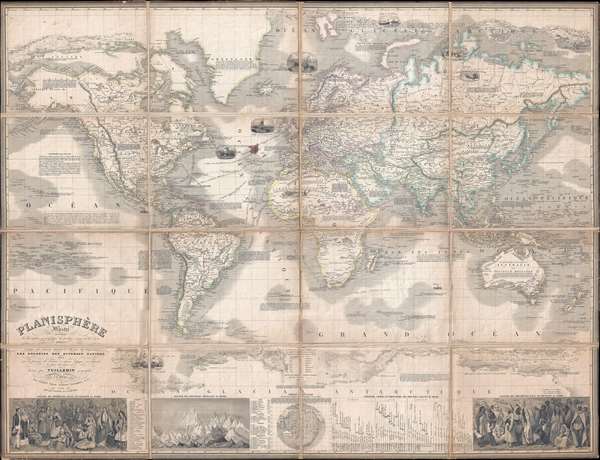 1851 Vuillemin Folding Map of the World on Mercator's Projection

This is a rare and magnificent 1851 case map of the world on Mercator's projection by French cartographer Alexandre Vuillemin. The map depicts the world in extraordinary detail with numerous decorative embellishments and prolific notations. Offering 11 decorative vignettes throughout, ranging from whaling ships at sea, to Eskimos hunting in the arctic, to armies of horsemen battling across the Sahara. In the American Northwest, some of Lewis and Clark's recent discoveries are noted and there is some attempt to notate the various American Indian tribes of the region. Alaska is labeled as 'Russian America.' The ice flows of both the Arctic and Antarctic are decoratively and beautifully rendered in profile. Nautical routes between major cities are noted. There are also innumerable historical and textual notations throughout the map, referencing various expeditions, when islands were discovered by European explorers, and other historical events. The bottom portion of the map features two engravings depicting the traditional consumes of various world cultures, along with a chart comparing the elevation of the world's mountains and another comparing the length of its rivers. All text is in French. A much smaller and edited down version of this map was published in Vuillemin's important Atlas Illustré de Géographie Commerciale et Industrielle. Edited by Fatout of No 17, Boulevard Poissoniere in Paris.