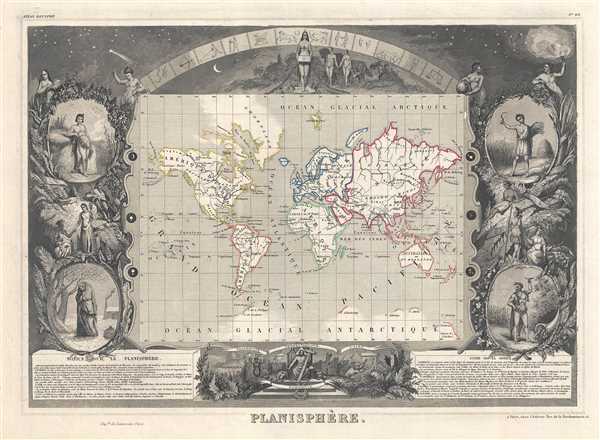 Elaborately decorated map of the World.

Atop the map is an image of the firmament, with shooting starts, clouds, and a symbolic representation of the Zodiac. At center is a curious unclothed woman with four breasts who appears to be chained to the earth or to a heavy box which she is holding - Pandora? Adam and Eve appear to her right walking hand in hand through pre-fall Eden. There too is the serpent, slithering just behind the couple.

At the base of the map an even more interesting scene unfolds in the form of a curious panorama. Here Jesus sits enthroned, bearing a cross in his left hand and pointing with his right, his head surrounded by a pyramid (a Masonic reference?). To his left are a stoic crowd including Napoleon, Socrates, and other unidentifiable great men bearing signs reading 'Paix' (peace), 'Liber' (freedom), and 'Egalite' (equality). Behind them is a domed building that appears to be a Greek or Roman temple. Opposite this scene, on Jesus' right is a very different scene showing a crowd fleeing in terror - these include a Pharisee holding the Torah and a turbaned Saracen. Behind them are the pyramids of Egypt. They are running towards what appears to be the jungle where there is a plinth upon which sits a bust of Satan. In this we can only assume that Levasseur is attempting to convey the righteousness of reason and logic over emotion and old world superstition.
Published by V. Levasseur as page no. 95 in the 1853 edition of his Atlas National de la France Illustree.