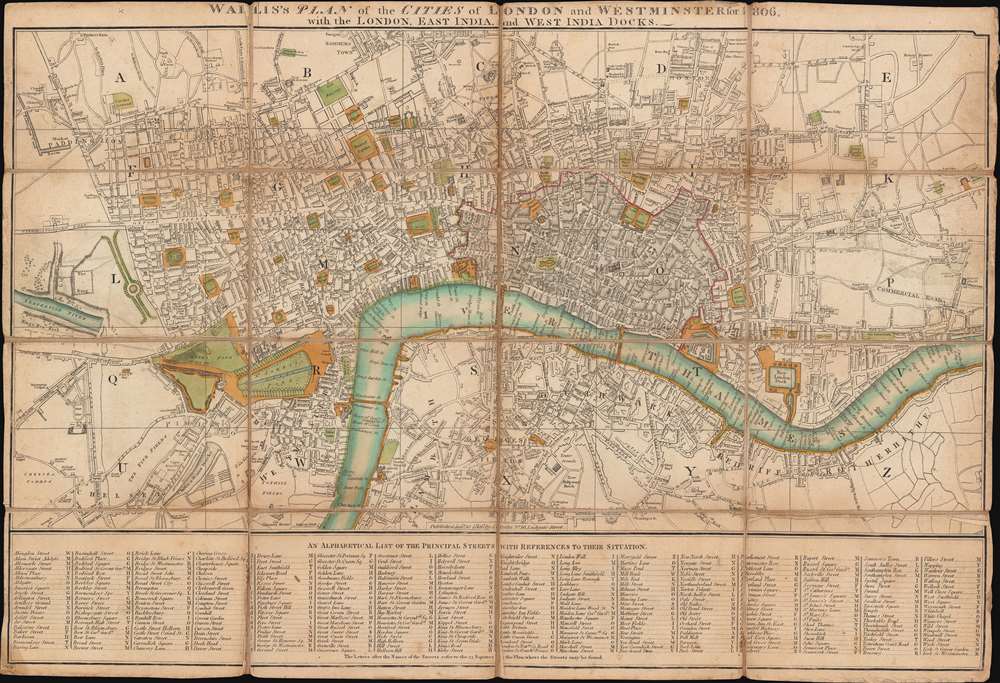 This is an 1806 John Wallis city plan or map of London, England. Focusing on London along the Thames, the map depicts from Paddington to White Horse Street and from Hoxton to Redriff. Hand color emphasizes important locations throughout, including Leicester Square, the Tower of London, St. Paul's Cathedral, and St. James's Park. Buckingham Palace is labeled 'Queen's Palace' (but isn't shaded), as is the British Museum.

Streets throughout London and reference an alphabetic index below the map's border, creating a truly useful item for everyday Londoners and visitors alike. An alphanumeric 'grid' labels areas of the city. Since this map was dissected and mounted on linen, it could be easily folded and unfolded and held in a pocket for use in day-to-day urban navigation.

This map was published by John Wallis in 1806. Wallis first published this map in 1798 with the title 'Wallis's Plan of the Cities of London and Westminster'. Under this title the map was issued in seven editions, with the present example representing the fourth. We note a single cataloged example of this edition, located at the London Metropolitan Archives.

John Wallis (1745 - 1818) was a London map seller, publisher, and maker of puzzles and board games active in the late 18th and early 19th centuries. Wallis studied mapmaking under the stationer William Johnson, with home he was apprenticed from about 1769. Upon his release from apprenticeship he partnered with one "Stonehouse" to found the short lived imprint "Wallis and Stonehouse". The firm lasted but two years before Wallis declared bankruptcy in 1778. Wallis subsequently started another independent firm specializing in children's books, games, and puzzles. In advertising ephemera issued c. 1812, Wallis claims, falsely, to have invented the puzzle map (this honor in fact goes to either John Bowles (1759) or John Spilsbury (1767). In 1813 he partnered with his son, Edward Wallis, to found Wallis and Son, which proved, primarily under Edward's management, exceptionally successful. Wallis's cartographic corpus is significant, including many important Revolutionary War ears maps of the Americas, as well as various pocket and dissected maps of London, Westminster, and environs. Upon his death, Wallis passed his business on to his sons, Edward Wallis and John Wallis, who operated separate but successful firms. The Edward Wallis firm is considered the direct successor to John Wallis, and the John Wallis II firm a new and completely separate establishment. Learn More...