1854 Pharoah Map or Plan of Madikeri or Mercara, Karnataka, India 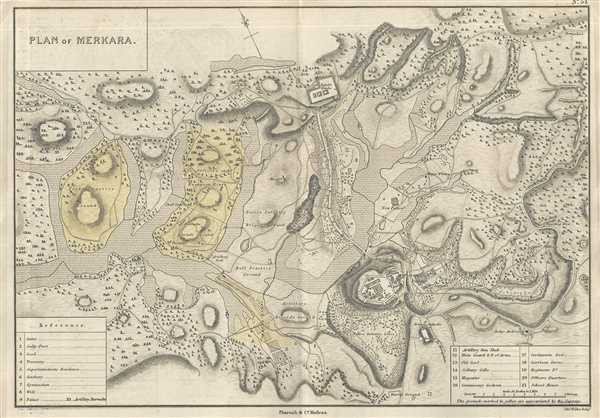 1854 Pharoah Map or Plan of Madikeri or Mercara, Karnataka, India

This is a nice example of the 1854 Pharoah and Company map of Madikeri or Mercara in Coorg, located in the Indian state of Karnataka. The map is beautifully rendered showing detail to the level of street and individual buildings. Topography is rendered by hachure. A reference at the bottom left and right quadrants lists 21 locations marked on the map, including the Palace, officers quarters, stores, gates, etc. This map was issued at the time when Mercara, part of the Kodagu District was part of British India. Today this hill station town is a popular holiday destination. This map was engraved by J. and C. Walker and issued as plate no. 54 by Pharoah and Company in their 1854 Atlas of Southern India.