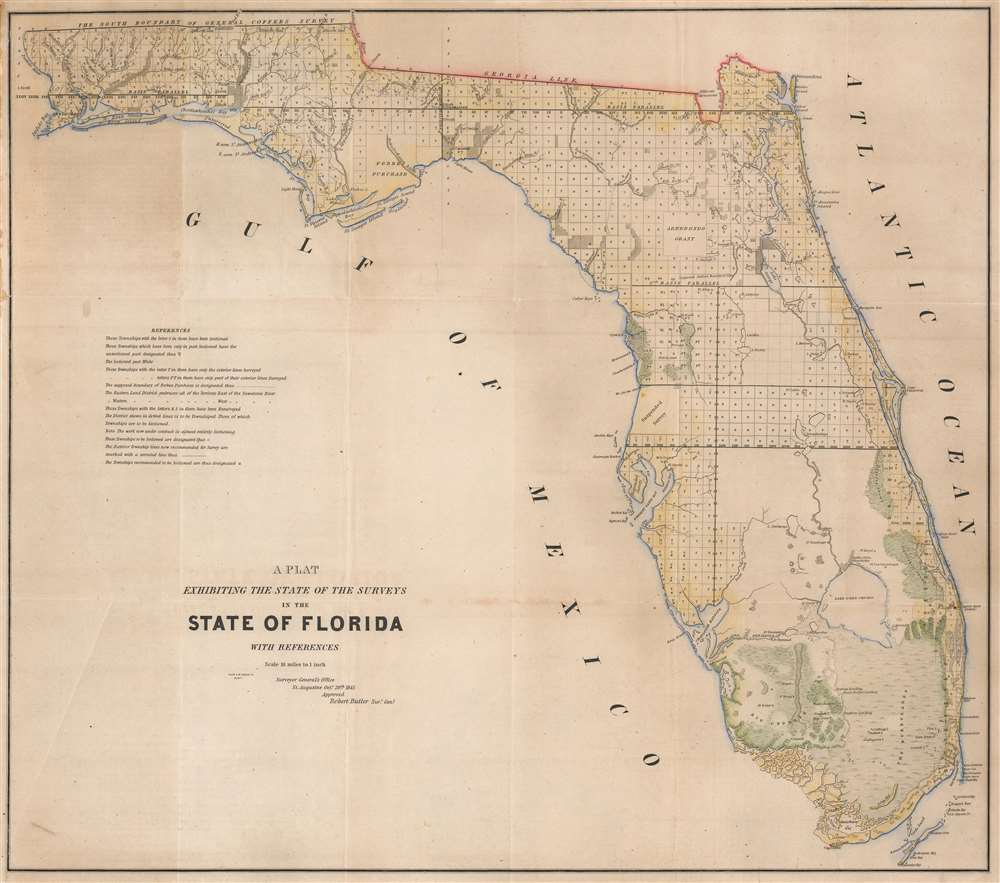 One of the first (if not the first) maps of Florida after it became a state, this is an 1845 Robert Butler map of Florida illustrating the progress of the Public Land Survey System in the newly admitted state.

Most of Florida is platted into square townships, a measure of the Public Land Survey System (PLSS). The PLSS was first widely implemented to survey the Northwest Ordinance and allowed for the systematic surveying and mapping of any territory gained by the United States. Cities and towns are marked, including St. Augustine and Pensacola, and Fort Lauderdale. The Arredondo Grant and the Forbes Purchase are both noted. Rivers and creeks are illustrated and labeled.

Arredondo's Grant is a holdover from Spanish Florida. Beginning in the 1790s, the Spanish crown offered land grants to people courageous enough to emigrate to Florida or for meritorious service to the crown. Arredondo's grant, named after Fernando de la Maza Arredondo (c. 1760 - 18??), is located to the west of St. Augustine in Alachua County. It was granted to Arredondo in 1817 by Alexander Ramirez of Havana. After Florida became a possession of the United States in 1821, Arredondo's grant, and other grants ceded by the Spanish government, became a point of contention between the United States government and the grantees. Initially, the U.S. government declared that it would honor the grants as long as the owner could prove their legitimacy. Fernando de la Maza Arredondo took his case to the United States Supreme Court, where his rights to the land were affirmed. Eventually, nonetheless, his grant was dissolved by U.S. courts on the basis that it were not properly developed and therefore forfeited.

Forbes Purchase appears here as a large tract of land in the Florida Panhandle. The lands were acquired from various Lower Creek and Seminole Indian groups in the early 19th century to pay off debt owed to Panton, Leslie and Company (later, the John Forbes company). Panton, Leslie and Company, 'company' being John Forbes (1767 - 1823), were Scottish merchants who actively traded with American Indians in Florida. Under both the British and Spanish, they were granted monopiles in East Florida, but also controlled most of the Indian trade in West Florida. As British Loyalists, they were vehemently against the United States, and actively encouraged their Indian contacts to war against the new nation. When William Paton and John Leslie died, c. 1803, the firm was reorganized around the surviving partner as John Forbes and Company. Over the years, the Lower Creek and Seminole groups accrued enormous debt to the firm. In order to pay the debt, they ceded enormous tracts of land in the Florida Panhandle to the Spanish government, which in turn passed the deeds on to John Forbes, hence 'Forbes' Purchase.' Forbes sold most of the land to two merchants from Savannah and Cuba named Richard Carnochan and Colin Mitchel. After Florida became part of the United States, there was an attempt by the government to seize this land, but the Supreme Court prevented the government seizure. In time it became clear that Forbes Purchase was mostly uninhabitable swampland, near impossible to develop, and so was ultimately sold off in lots.

This map was created by the Florida Surveyor General's Office, approved by Surveyor General Robert Butler, engraved by Smith and McClelland, and published in a report to the United States Senate by the General Land Office in 1845. We note two cataloged examples which are part of the collection of the Touchton Map Library at the Tampa Bay History Center. The present 1845 edition is not cataloged in OCLC.

Robert Butler (December 29, 1786 - January 13, 1860) was an American military officer and government surveyor. Born in Carlisle, Pennsylvania, Butler's father, Colonel Thomas Butler (1748 - 1805) died of yellow fever in 1805 and Butler and his siblings became wards of future president Andrew Jackson. Butler married Rachel Hays (General Jackson's niece) in August 1808. He was a graduate of West Point and served as General Jackson's Assistant Adjutant-General during the Battle of New Orleans during the War of 1812. He resigned from the U.S. Army in 1821, having attained the ranks of colonel and commander. He became the acting Governor of East Florida on July 10, 1821 (possibly why he resigned from the Army?) and served for only two days when John R. Bell arrived. He was appointed the first Surveyor General of Florida in 1824 and held the position until 1848. He is responsible for one of, if not the, first maps of Florida after it became a state in 1845. Learn More...