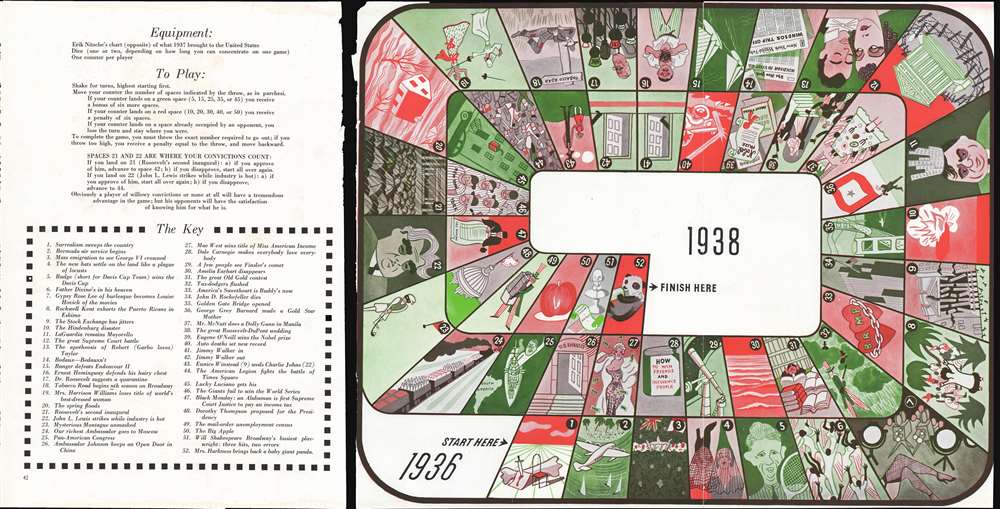 Highlights events of the previous year, including the first giant panda cub to arrive in the United States.
$300.00

This is a 1938 Erik Nitsche game board tracing some of the more newsworthy events (at least in Nitsche's view) that took place the previous year. These events range from the second inauguration of Franklin Roosevelt and the coronation of King George VI to the Giants losing the World Series and nine-year-old Eunice Winstead marrying twenty-two-year-old Charlie Johns. Numerous other events are referenced, such as the opening of the Golden Gate Bridge, the disappearance of Amelia Earhart, and a reference to a record number of deaths in car accidents. The original rule sheet is also present, which also includes a key to the illustrations that make up the fifty-two spaces on the game board.

This game was created by Erik Nitsche in 1938 and was published in a magazine, most likely Fortune.

Erik Nitsche (September 7, 1908 - November 10, 1998) was a Swiss-born artist who designed, books, annual reports, and other printed material. Born in Lausanne, Switzerland, Nitsche came from an artistic family. Both his father and grandfather were photographers and the family counted several artists among their friends, including Paul Klee. Nitsche attended the Kunstgewerbeschule in Munich, Germany, instead of the Bauhaus school in Berlin. He worked in Cologne, Germany, after graduating in the early 1930s, and was soon hired by Maximilien Vox to work in Paris. Nitsche moved to the United States in 1934, fleeing the rising tensions in Europe. He arrived in Hollywood before landing in New York City, where he worked as a freelance graphic artist for the next ten years doing work for numerous magazines, including Look, Life, Vanity Fair, and Harper's Bazaar. He became art director of Air Tech and Air News magazines in 1940, where he had total control over the illustrations and format. In the early 1950s, Nitsche left New York for Connecticut, where he began working with The Gotham Agency, which had General Dynamics as a client. By 1955, Nitsche was named art director at General Dynamics, which wanted to portray itself as a purveyor of peace instead of a manufacturer of weapons and other related materials of destruction. In the five short years he worked for General Dynamics, Nitsche created a place for himself in the history of graphic design, with this work being his most well-known legacy. Among the countless posters, brochures, advertisements, and annual reports he created for General Dynamics was a 420-page book entitled 'Dynamic America' that recounted the company's history. In 1960, Nitsche moved back to Geneva, Switzerland, where he founded Erik Nitsche International, which published pictorial history books on myriad topics. After moving around for most of his career, Nitsche was diagnosed with a possibly fatal illness in 1995 and died on November 10, 1998. Learn More...

Very good. Verso repairs to centerfold separations. Blank on verso.
Looking for a high-resolution scan of this?