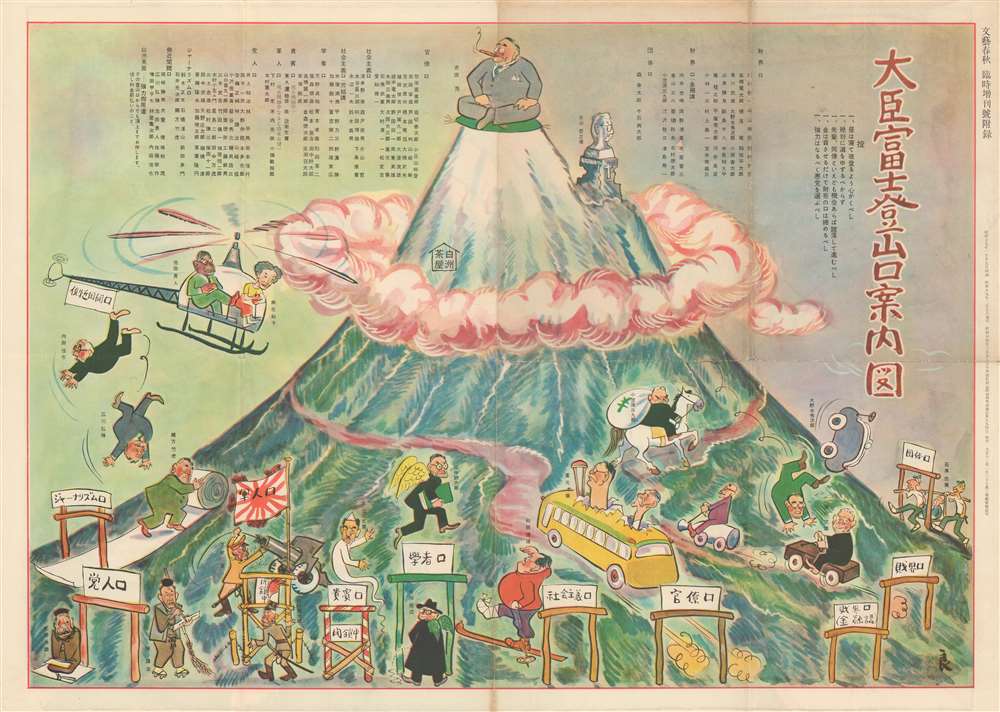 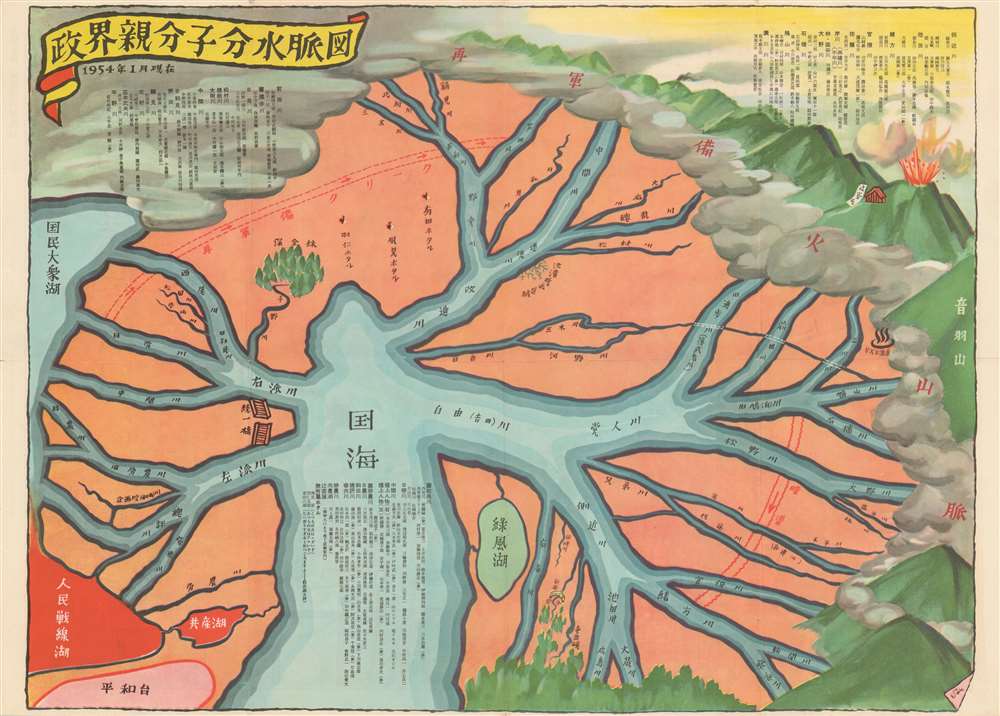 A very curious double-sided map / diagram satirizing the Fifth Cabinet of Prime Minister Shigeru Yoshida (1878 - 1967), in power from May 31, 1953, to December 10, 1954. The recto (front) presents a trail map to the summit of Mount Fuji - symbolizing Japan. Yoshida sits atop smoking a large cigar, while along the way the Christian socialist, Tetsu Katayama (1887 - 1978) appears as a monument. At the base of the mountain Yoshida's cabinet secretaries, each representing an aspect of Japanese governance, work their way to the top via various 'gates' or 'trails.' Some suffer mishaps along the way. The verso (back) offers a similarly intriguing map/diagram of the national political/academic/business/bureaucratic system represented as a series of interconnected rivers flowing to a sea / nation.

This view is similar to those that would be given to tourists, hikers, and religious pilgrims at Mt. Fuji, listing the various entrances to trails, stations and amenities on the way to the summit, as well as rules for the trail. Here the satirist has changed the name of the gates (the bureaucratic entrance, the military entrance, the academic entrance, and so on) and stations ('self-sufficiency teahouse') and reversed the normal rules to make fun of the ambitions of leading political figures. Those seeking to reach the summit are advised to 'be mindful only to hike at night and not during the day,' 'never give way to others,' and that 'even the elderly and colleagues should be pushed aside if there is an opportunity.'

Japan in the Aftermath of Occupation

Japanese democracy in this period was lively and raucous, with parties being born and dissolving in short succession and former allies becoming enemies overnight, or vice versa. As a parliamentary system, cabinet members were generally chosen to satisfy various factions and coalition parties rather than on qualifications or merit. As this view demonstrates, the press was happy to take full advantage of free speech to comment on these developments following strict censorship prior to 1945 and somewhat less strict censorship during the U.S. Occupation. The early postwar period (1945 - 1960) was preoccupied with economic reconstruction following the war, but the geopolitics of the Cold War and the legacy of Japan's recent past were also paramount. Japan's postwar constitution included a renouncement of ever resorting to war to resolve disputes with other countries and Japan was only permitted a small self-defense force, which was mostly used to assist the U.S. military with internal policing during the Occupation.

But the Cold War caused the U.S. to change its approach and encourage a revival of Japan's military-industrial complex to support the war in Korea. Japan's Self-Defense Forces were also allowed to expand and take on new roles, an issue that was extremely controversial in Japan and throughout Asia. Many in Japan were concerned about rearmaments leading to a return of militarism, and worried that Japan would become the frontline in a war between the U.S. and the Soviet Union. This map, made roughly two years after the end of the U.S. Occupation, shows the centrality of these issues to Japanese domestic politics, which would only be partially resolved after the Anpo Treaty political crisis of 1960.

Sitting atop Mt. Fuji is Yoshida Shigeru (吉田茂; September 22, 1878 - October 20, 1967), Prime Minister at the time of the map's production (he preceded and succeeded Katayama), nearing the end of six-year terms of office. Yoshida was born in Ōiso, Japan, and had a long career as a diplomat before entering politics, including long stints in China and Europe. Due to these experiences, he spoke English well. He also opposed Japan going to war with the United States and United Kingdom in 1941 and was not directly implicated in any war crimes, which along with a general conservative and pro-U.S. orientation earned him strong U.S. support. Popular support during his first four terms as Prime Minister lent him near autocratic power to pursue his reforms, designed to rebuild the Japanese economy and industrial infrastructure. In doing so, he laid the groundwork for the modern Japanese economy and the postwar Japanese economic boom.

Despite his remarkable electoral history, by the time this map was produced, Yoshida's popularity was waning and his coalition was falling apart. Late in 1954, Hatoyama Ichirō (鳩山 一郎; January 1, 1883 - March 7, 1959), who was taken off the Allied political purge list in 1951, challenged Yoshida for leadership of the Liberal Party, forcing him out of office. Yoshida retired from politics when the two conservative parties merged into the Liberal-Democratic Party (自由民主党, LDP for short) under Hatoyama’s leadership, inaugurating the '1955 System' which is still the basis for Japanese politics today.

Most of the leading figures of Japanese politics at the time are satirized in this view, and several are worthy of particular notice. Near the top of Mt. Fuji is Katayama Tetsu (片山 哲), the first Prime Minister elected under Japan's postwar Constitution, and one of only two socialist prime ministers in Japanese history. The depiction of him as a statue may refer to his prudishness (he later led the Temperance Union of Japan). His statue also bears a cross, referring to Katayama's Christian beliefs, which were as horrifying to many conservatives as his socialism.

At left is a helicopter trailed by a flag with the words 'Closeness to the country's powerful families entrance.' Inside are Ikeda Hayato (池田勇人), a protégé of Yoshida, and Asō Kazuko (麻生和子), Yoshida's daughter. The implication is that these were rising stars in Liberal Party (soon to be LDP) who could take a shortcut to power, which turned out to be true in Ikeda's case as he became Prime Minister in 1960. Falling from the helicopter are Uchida Nobuya (内田信也) and Hirokawa Kozen (広川弘禅), two political veterans whose prospects were fading.

Verso - The Waterways of Japanese Politics

Though not quite as amusing as the Mt. Fuji view, the verso depicts Japanese political factions and leading figures as waterways feeding into each other and eventually to the nation as a whole. The left-wing parties at bottom-left are fragmented into various rivers and lakes, while most of the rivers are made up of conservative parties of various stripes, presaging their unification under the LDP the following year.

This view was printed by Bungei Shunjū (文藝春秋) on January 25, 1954, and distributed on February 5 as a one-off addendum to the monthly magazine. We are aware of only 2 known examples and none in institutional collections.