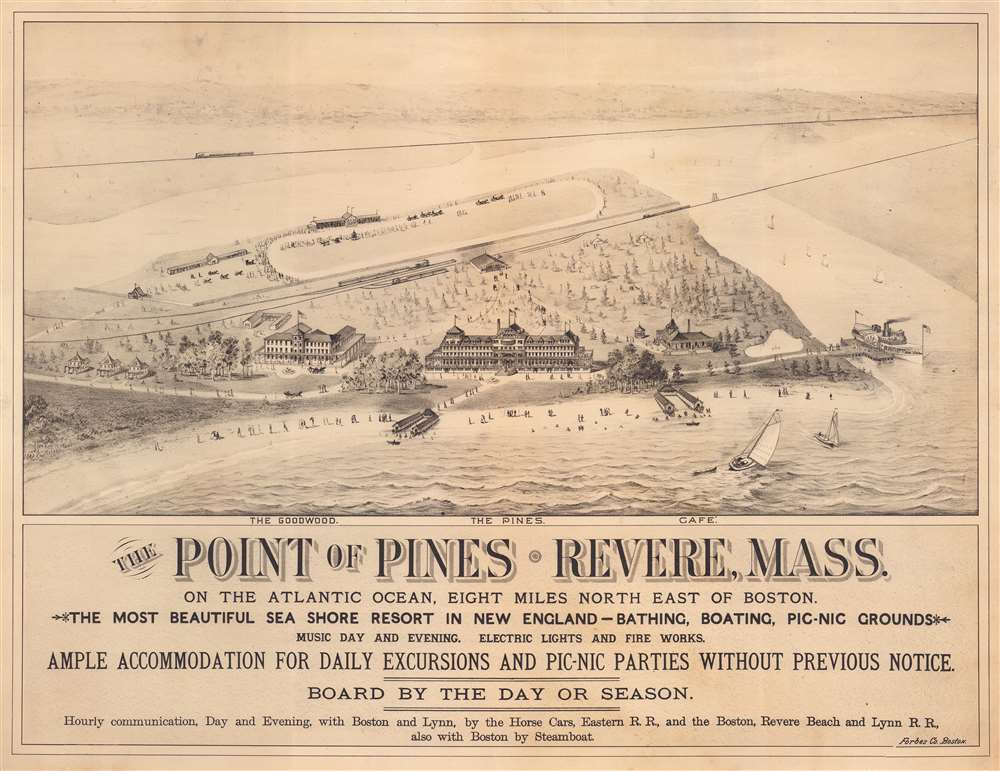 This is a c. 1882 E.R. Howe bird's-eye view map of the Point of Pines at Revere Beach or Chelsea Beach, Massachusetts. A point of land on Boston Harbor between Boston and Lynn, the Point of Pines was once called Chelsea Beach, but is known as Revere Beach today. Two hotels, the Goodwood and the Pines, occupy the foreground, along with a café. Vacationers and day-trippers stroll along the beach and pathways leading to and from the hotels. A railroad station (a stop on the Boston, Revere Beach, and Lynn Railroad) appears in the background and is connected to the hotels via pathways.

The Goodwood and the Pines

When the Boston, Revere Beach and Lynn Railroad opened in 1875, only one hotel stood on this stretch of sand, the Ocean House, which opened c. 1834 as the Robinson Crusoe House. This hotel was renamed the Hotel Goodwood in 1881 when the newly formed Chelsea Beach Company acquired it, along with two hundred acres of adjacent land. The Chelsea Beach Company soon began construction on the Pines, later called the Point of Pines Hotel and the Hotel Pines. The Pines boasted accommodations for 400 overnight guests and could seat two thousand people in its expansive dining rooms. At 300 feet long, 100 feet wide, and five stories tall, it was the largest hotel on the New England coast. A thirty-two-foot-wide veranda surrounded the first floor, allowing plenty of room for promenading. The Pines opened on Saturday, July 2, 1881. Over the course of its history, the Pines changed hands repeatedly and endured hard times in the years leading up to World War I (1914 - 1918). President Theodore Roosevelt made a campaign stop at the Pines during his 1912 Bull Moose candidacy. The Pines operated until 1913, when it was closed following a police raid that discovered unlicensed liquor sales. It was demolished the following year. The Goodwood was demolished in 1898.

This view was created by E. R. Howe and printed by the Forbes Company of Boston c. 1882. We note only one other cataloged example, located at the Norman B. Leventhal Map Center at the Boston Public Library.

William H. Forbes (1836 - February 3, 1915) was an English-American businessman and printer active in the second half of the 19th and early 20th centuries. Forbes was born in Liverpool England and immigrated to the United States at 12 years old. In the United States, he lived with Quaker relatives at Milton-on-the-Hudson, who provided him with a top-notch education. Forbes apprenticed as lithographer under H. A. Strong in New York. Following his maturity, he relocated to Boston in 1861, founding William H. Forbes and Company shortly after, in 1862. Forbes proved an excellent lithographer and savvy businessman. He reorganized his growing printing concern in 1875, incorporating as Forbes Lithograph Manufacturing Company in 1875. They focused on lithography, embossing, Albertype process printing, typesetting, copper and steel plate printing, and photolithography. At its height, Forbes Lithograph Manufacturing Company had over 70 presses located in Boston, New York, Chicago, and London, and staffed more than 600 workers, including 60 designers, artists, engravers, and lithograph artists. By 1881, Forbes himself had taken a back seat, working as the company treasurer, with William P. Hunt serving as president. In his personal life Forbes was well liked. He married the sister of well-known lithographer Louis Prang. After his death, the firm was taken over by his son, William S. Forbes. During World War II they were major printers of Allied military currency, producing more than 4 billion notes. The firm went out of business in the second half of the 20th century. Learn More...