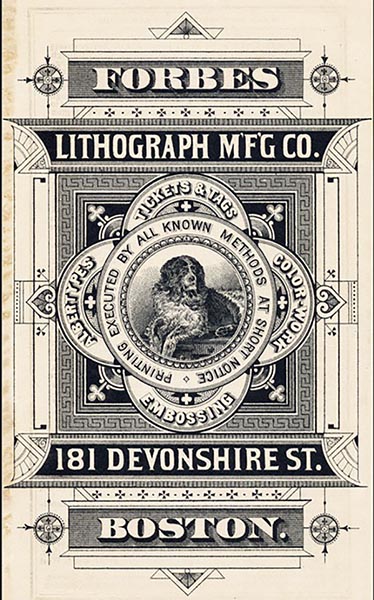 William H. Forbes (1836 - February 3, 1915) was an English-American businessman and printer active in the second half of the 19th and early 20th centuries. Forbes was born in Liverpool England and immigrated to the United States at 12 years old. In the United States, he lived with Quaker relatives at Milton-on-the-Hudson, who provided him with a top-notch education. Forbes apprenticed as lithographer under H. A. Strong in New York. Following his maturity, he relocated to Boston in 1861, founding William H. Forbes and Company shortly after, in 1862. Forbes proved an excellent lithographer and savvy businessman. He reorganized his growing printing concern in 1875, incorporating as Forbes Lithograph Manufacturing Company in 1875. They focused on lithography, embossing, Albertype process printing, typesetting, copper and steel plate printing, and photolithography. At its height, Forbes Lithograph Manufacturing Company had over 70 presses located in Boston, New York, Chicago, and London, and staffed more than 600 workers, including 60 designers, artists, engravers, and lithograph artists. By 1881, Forbes himself had taken a back seat, working as the company treasurer, with William P. Hunt serving as president. In his personal life Forbes was well liked. He married the sister of well-known lithographer Louis Prang. After his death, the firm was taken over by his son, William S. Forbes. During World War II they were major printers of Allied military currency, producing more than 4 billion notes. The firm went out of business in the second half of the 20th century.

1876 Baker Pictorial 'Porcineograph' Map of the United States (as Pig)