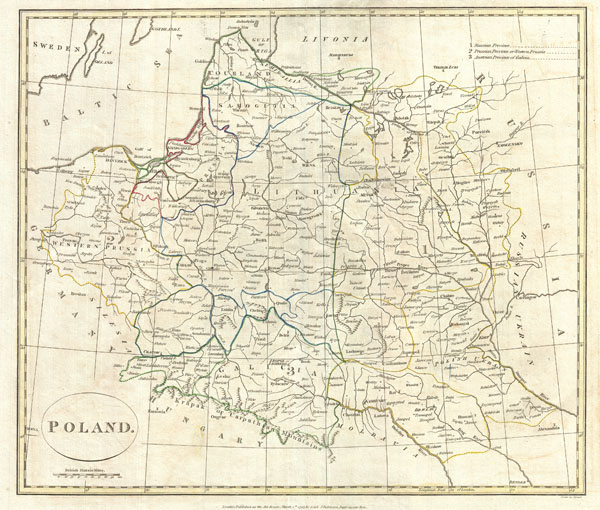 Shows the partitioning of Poland.

A fine 1799 map of Poland by the English mapmaker Clement Cruttwell. Shows the partitioning of the Polish-Lithuanian Commonwealth in 1765-1795 between Prussia, Austria, and Russia. The map covers the area from Poznan in the west to just west of Kiev in the east, and from as far south as Moldavan border. Makes note in the upper-right quadrant of the three partitioned areas: Russia, Prussia, and Austria. Russia claimed the bulk of what once comprised the Grand Duchy of Lithuania from Livonia south to Moldava. Prussia took hold of the area east of Warsaw, while Austria held claim to the area as far south as Galicia. Detailed borders also show the regions of Courland, Samoglita, and the Polish Ukraine. Outline color and fine copper plate engraving in the minimalist English style prevalent in the late 18th and early 19th centuries. Mountains and topographical other detail shown by profile. Also makes note of rivers and some offshore shoals. Drawn by Clement Cruttwell and published in the 1799 Atlas to Cruttwell's Gazetteer.