1831 Schropp Map of the Kingdom of Poland with Parts of Russia, Austria and Prussia 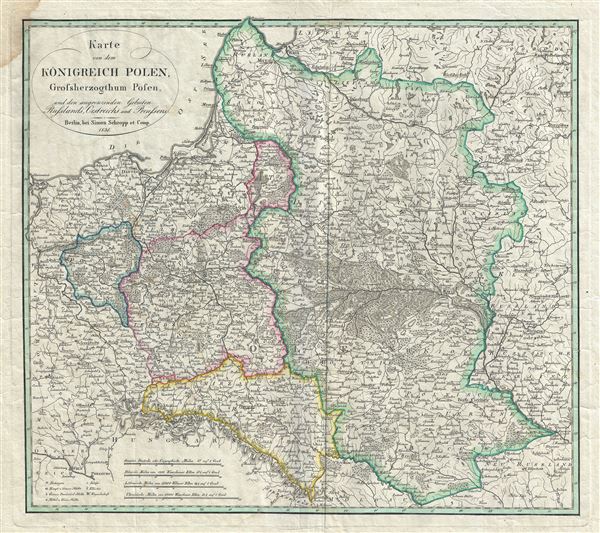 1831 Schropp Map of the Kingdom of Poland with Parts of Russia, Austria and Prussia

This is a beautiful example of Simon Schropp's 1831 map of Poland and Lithuania. The map depicts the Kingdom of Poland (Congress Poland), the Grand Duchy of Posen and neighboring territories of Austria, Russia and Prussia. It covers the modern day countries of Poland, Lithuania, Latvia, Belarus and Ukraine. The map is highly detailed, and notes rivers, towns, lakes, etc., with mountains and forests beautifully rendered.

This map covers Poland following Napoleonic Wars and the treaties of the 1815 Congress of Vienna. In 1795, The Polish-Lithuanian Commonwealth was dismembered and divided between Russia, Prussia, and Austria. During Napoleon's brief period of hegemony in the region he resurrected Poland and Polish hopes for solidarity in the form of the Duchy of Warsaw. Following Napoleon's defeat at the Battle of Waterloo, the Victoria powers repartitioned Poland roughly along the lines of the 1785 Third Partition. This event is often referred to as the 'Fourth Partition of Poland' and reflects the borders presented here.

Color coding identifies the powers that controlled each part of Poland. The Grand Duchy of Posen, officially part of the Kingdom of Prussia, is shown here in blue. The region highlighted in red, surrounding Warsaw, is often called Congress Poland or the Tsardom of Poland, and was, though nominally independent, in effect a dependency of Imperial Russia. As this map was being made, this region was witnessing the November Uprising, or the Polish-Russian War of 1830-31, protesting Russian rule. The revolt started in Warsaw, but quickly spread to the territories of Lithuania, Belarus and Ukraine. It would eventually be defeated by the Imperial Russian Army.

This map was created by Simon Schropp and Company of Berlin in 1831.

Simon Schropp (fl. c. 1742 - present) was a German cartographer and bookseller active in Berlin during the 18th and 19th centuries. In April of 1742 Schropp received permission from the Prussian King Frederick II to make and sell maps in Berlin. Frederick was keenly aware of the lack of accurate cartographic knowledge regarding his kingdom and promoted both public and private cartographic efforts accordingly. By the late 18th century Schropp had become Berlin's most prominent publisher of maps and atlases. Schropp's royal mandate and allowed him access to some of Prussia's leading cartographic figures, including Daniel Sotzmann, the Royal Geographer, among other. His maps thus contained the most updated cartographic knowledge and were considered to be of the highest caliber. Despite wars, French occupation of Berlin, Schropp thrived. Schropp and Company remains alive and well today. Their original location Konigsstrasse and Heilige Geiststrasse was destroyed in a bomb during the final days of World War II, but their new location on Hardenbergstr, 9a, is a thriving business catering to the travel and tourism literature market.