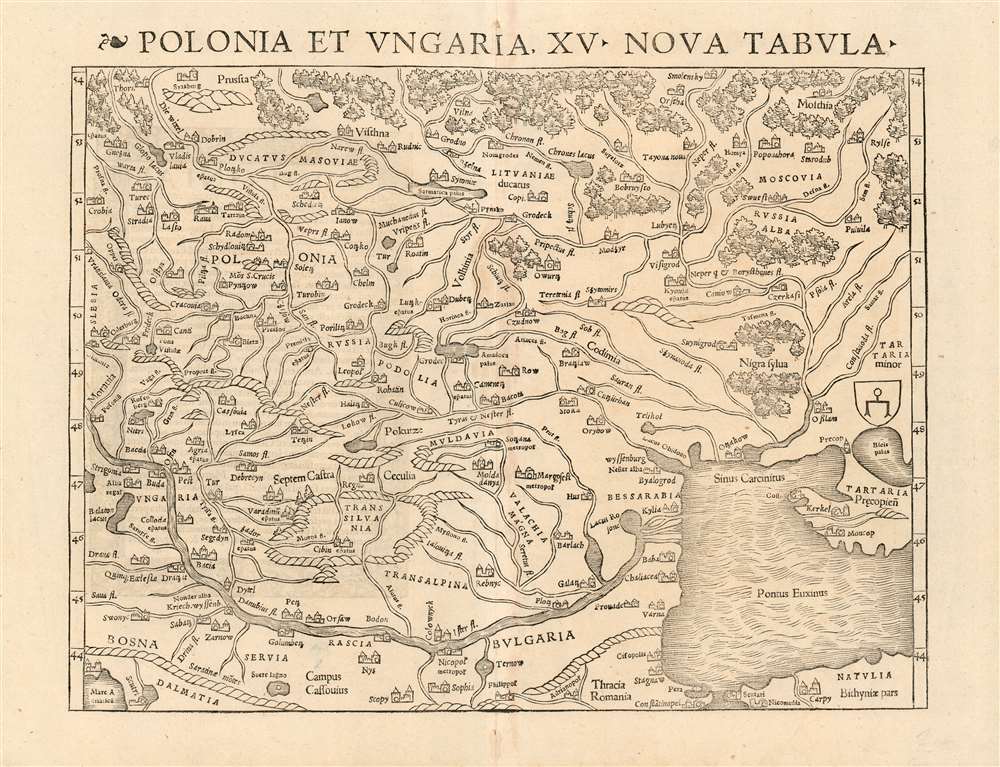 The earliest modern map to clearly depict Poland and Hungary.

This is the scarce 1540 first state of Sebastian Münster's map of Poland and Hungary, the first map to focus on the region using contemporary place names and geographical knowledge. The only earlier printed maps to focus at all on the region were iterations of Ptolemy's maps of Sarmatia in Europe; the nearest contender for an earlier modern map of the region is Waldseemüller's 1513 Tabula moderna Sarmatie which was of broader scope (reaching as far west as Germany and the Bavarian Alps) and whose geography for the region is far more primitive. Münster's map is the first of this region to present the reader with a largely recognizable depiction of Poland and Hungary.

The map's northern extents pertain to Poland: at its northernmost point is Prussia. The capitol, Krakow, is shown; Warsaw had not yet become a royal city and would not rise to prominence until the end of the 16th century. The Duchy of Masovia appears - it had been incorporated into Poland in 1526 - and the Duchy of Lithuania is shown (the map pre-dates the Polish-Lithuanian Commonwealth by 29 years). Muscovy is shown at the eastern extent of the map: Smolensk, Moscow, Ryazan all appear; Kiev can be found as well.

The southern reaches of the map are dominated by the River Danube: Both Buda and Pest appear as do the mountains of Transylvania. Bosnia, Serbia and Bulgaria are all shown along the southern shore of the Danube, whose broad delta into the Black Sea is clearly depicted. Constantinople can just be seen at the southern edge of the map. Tartaria, shown at the eastern extreme of the map, is marked with a heraldic shield bearing a stylized spur; this was the symbol Waldseemüller used on his 1507 world map to indicate the Tatar empire, so is suggestive of Munster’s primary source for this map - despite the present map having outstripped Waldseemüller's treatment of the area in every respect.

This map first appeared in Münster's 1540 edition of Ptolemy's Geographia, and appeared in subsequent editions of that work and Münster's own Cosmographia with various typographical changes. Only the 1540 and 1542 editions of Geographia bear the page number 42 on the verso; of these two the typography of the map's title (with one leaf motif to the left) corresponds only to the 1540 issue. The map appears separately in its later editions in various institutional collections, but there are no separate examples of the 1540 listed in OCLC. About twenty copies of the full 1540 Geographia appear in institutional collections.