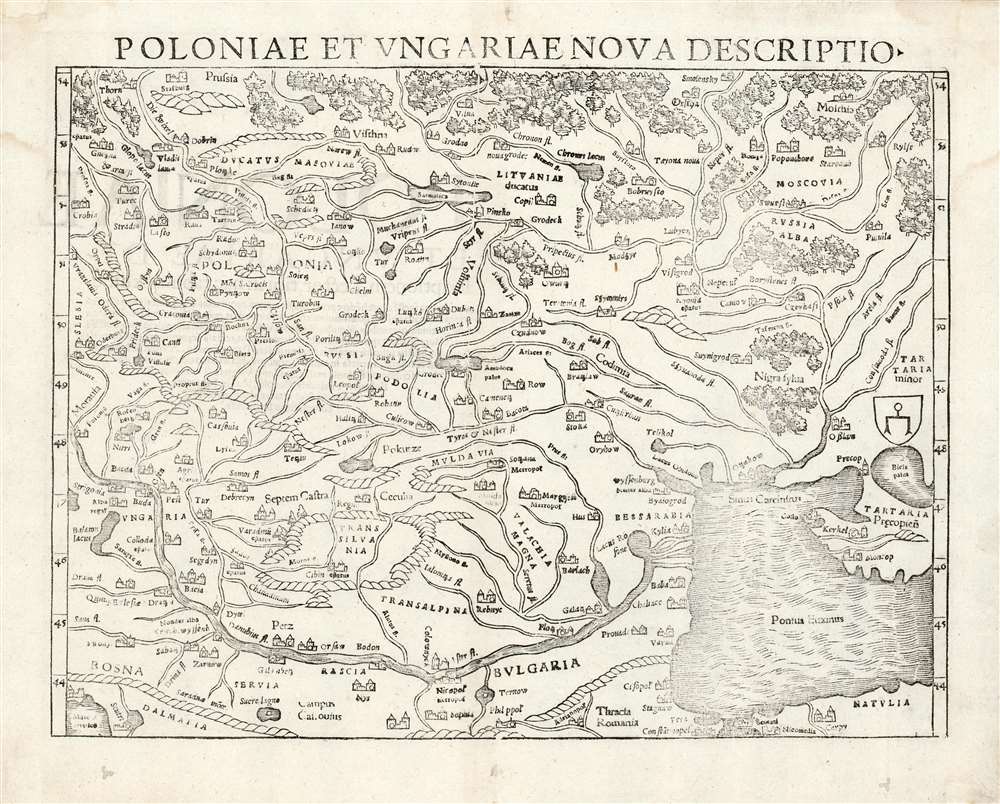 The earliest modern map to clearly depict Poland and Hungary.
$750.00

This is the 1559 Latin edition of Sebastian Münster's map of Poland and Hungary, the first acquirable map to focus on the region using contemporary place names and geographical knowledge. The only earlier printed maps to focus at all on the region were iterations of Ptolemy's maps of Sarmatia in Europe; the nearest surviving contender for an earlier modern map of the region is Waldseemüller's 1513 Tabula moderna Sarmatie which was of broader scope (reaching as far west as Germany and the Bavarian Alps) and whose geography for the region is far more primitive. Bernard Wapowski's c. 1526 map of Sarmatia preceded Münster's, and almost certainly informed his map, but no copies of it have survived. Münster's map is thus the first of this region available to the collector with a largely recognizable depiction of Poland and Hungary.

The map's northern extents pertain to Poland: at its northernmost point is Prussia. The capitol, Krakow, is shown; Warsaw had not yet become a royal city and would not rise to prominence until the end of the 16th century. The Duchy of Masovia appears - it had been incorporated into Poland in 1526 - and the Duchy of Lithuania is shown (the map pre-dates the Polish-Lithuanian Commonwealth by 29 years). Muscovy is shown at the eastern extent of the map: Smolensk, Moscow, Ryazan all appear; Kiev can be found as well.

The southern reaches of the map are dominated by the River Danube: Both Buda and Pest appear as do the mountains of Transylvania. Bosnia, Serbia and Bulgaria are all shown along the southern shore of the Danube, whose broad delta into the Black Sea is clearly depicted. Constantinople can just be seen at the southern edge of the map. Tartaria, shown at the eastern extreme of the map, is marked with a heraldic shield bearing a stylized spur; this was the symbol Waldseemüller used on his 1507 world map to indicate the Tatar empire, so is suggestive of Munster’s primary source for this map - despite the present map having outstripped Waldseemüller's treatment of the area in every respect.

This map first appeared in Münster's 1540 edition of Ptolemy's Geographia, and appeared in subsequent editions of that work and Münster's own Cosmographia with various typographical changes. The map appears separately in various institutional collections. Cosmographia is well represented in OCLC.

Munster, S. / Ptolemy, C., Cosmographia, (Basel: Petri ) 1559.     The Cosmographia Universalis, one of the greatest geographical and historical works of the 16th century, 'taught nearly three generations of laymen most of what they knew about the world beyond their native places' (Strauss). Filled with maps, views, and rich descriptions of places throughout Europe and beyond, it was the best general source of geographical information until the advent of Ortelius' Theatrum. It was first issued by Sebastian Munster (1488 - 1552) in its 1544 German edition, and stayed in print long after its author's death in thirty five editions, and in five languages. (Of these, the 1550 and 1552 editions are widely regarded as the most complete and truest to the author's intentions: thereafter, later editors continued to add to the work's text; editions from 1588 onwards employed an entirely different set of maps produced on Ortelius' model.) Munster's goal, initially, was to rally his homeland's humanists and scholars to produce a new map of Germany in order to 'see what kind of a land our ancestors conquered for their home... bring honor to our country and place its beauties in the clear light of day.' Munster's project quickly expanded to cover the known world in its scope to produce a 'sufficiently large volume, in which I touch upon the foundation of all nations and kingdoms, their peculiarities, rivers, mountains, customs of men, royal successions, origins of the more important cities, succinct histories, religions, characteristics and fertility of lands... in Germany, however, I tarry a little longer.'.