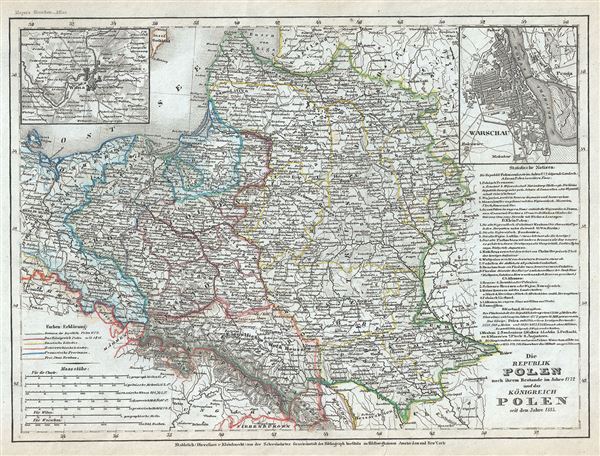 This is a scarce 1852 map of Poland and Lithuania by Joseph Meyer. It covers in whole or part of the modern day nations of Poland, Lithuania, Latvia, Belarus, Germany, Czech Republic and Ukraine. An inset in the top left quadrant features the city of Vilnius (Wilna), while the top right quadrant features another inset of Warsaw. Throughout, numerous cities, towns, rivers, mountains and other important topographical features are noted.

The map illustrates the Republic of Poland after the First Partition of 1772 and the Kingdom of Poland since 1815. By the mid-18th century Poland, due to an inefficient and corrupt internal bureaucracy, had lost much of its autonomy to its aggressive and powerful neighbors: Russia, Austria and Prussia. In 1764 Stanislaw August Poniatowski was elevated by election to become King of Poland. This worldly and refined ruler attempted various reforms intended to preserve the failing Polish state, but found himself increasingly subservient to Tsarina Catherina II of Russia. The Bar Confederation of 1768, a rebellion against increasingly Russian influence over Polish politics, led to the First Partition of the Commonwealth, a permanent annexation of Polish territory by its more powerful neighbors. The First Partition occurred in 1772 with Prussia occupying Poland's long coveted western territories, Austria seizing Galicia, and Russia taking part of Livonia.

In the aftermath of the First Partition, the Second Partition was almost inevitable. Poland allied with Prussia to thwart the ambitions of Russia in the east. This, along with a number of other factors lead to the War in Defense of the Constitution between Poland and Russia. Largely abandoned by their Prussian allies, Poland could not hope to stand against the powerful Russian military. Poland's defeat resulted in the loss of nearly 50% of its remaining territory to Russia and Prussia, who signed an accord in 1793. The Third Partition of Poland, in 1795, would dissolve what remained of the reduced Polish-Lithuanian Commonwealth, ending Polish all autonomy in the 18th century.

In 1795, The Polish-Lithuanian Commonwealth was dismembered and divided between Russia, Prussia, and Austria. During Napoleon's brief period of hegemony in the region he resurrected Poland and Polish hopes for solidarity in the form of the Duchy of Warsaw. Following Napoleon's defeat at the Battle of Waterloo and the treaties of the 1815 Congress of Vienna, the Victorian powers repartitioned Poland roughly along the lines of the 1785 Third Partition. This event is often referred to as the 'Fourth Partition of Poland' and created the Kingdom of Poland, often called Congress Poland, or the Tsardom of Poland, and was, though nominally independent, in effect a dependency of Imperial Russia.
Color coding identifies the powers that controlled each part of Poland. This map was issued in Meyer's Zeitung Atlas. Although all the maps in this atlas are not individually dated, the title page and maps were often updated while the imprint with the date was not, causing confusion to the exact date for some of the maps. Moreover some maps in the atlas were taped in at a later date as an update to the atlas. We have dated the maps in this collection to the best of our ability.