1752 Vaugondy Map of Poland and Lithuania 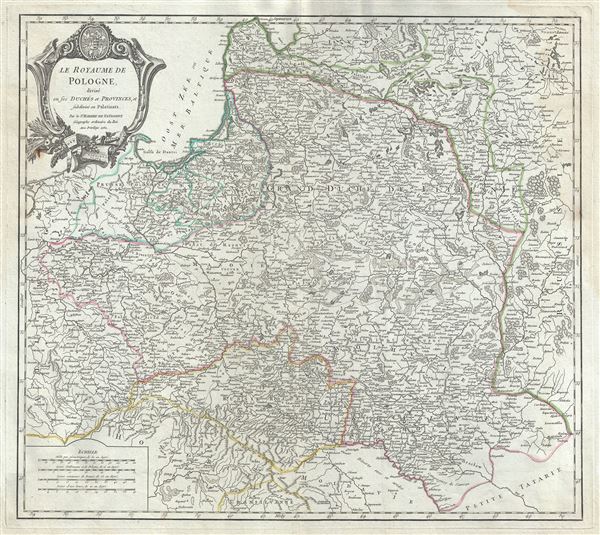 1752 Vaugondy Map of Poland and Lithuania

This is a fine 1752 map of the Kingdom of Poland by Robert de Vaugondy. It depicts the different Palantinates or administrative division of Poland and Lithuania as well as parts of the Russian Empire, Transylvania and Latvia. The map renders the entire region in extraordinary detail offering both topographical and political information.

This map illustrates Poland in the declining years of the Polish-Lithuanian Commonwealth, prior to the 1772 First Partition of the Commonwealth. Following the death of King John III Sobieski and the end of Poland's Golden Age, a series of internal conflicts and external invasions destabilized the region to the brink of anarchy. The rapacious Russian Empire, under Tzar Peter the Great, used its influence to further weaken the state in anticipation of outright annexation. By 1768 the Polish-Lithuanian Commonwealth would become a protectorate of Imperial Russia.

A beautifully engraved title cartouche in the top left quadrant features the 'Pacta Conventa,' an agreement between the king and the Polish Nation reached at the beginning of each reign, from 1573 – 1764. The map was drawn by Robert de Vaugondy in 1752 and published in the 1757 issue of his Atlas Universel. The Atlas Universel was one of the first atlases based upon actual surveys. Therefore, this map is highly accurate (for the period) and has most contemporary town names correct.

Rumsey 3353.071. Pedley, Mary Sponberg Belle et Utile: The Work of the Robert de Vaugondy Family of Mapmakers, 292.
Looking for a high-resolution scan of this?