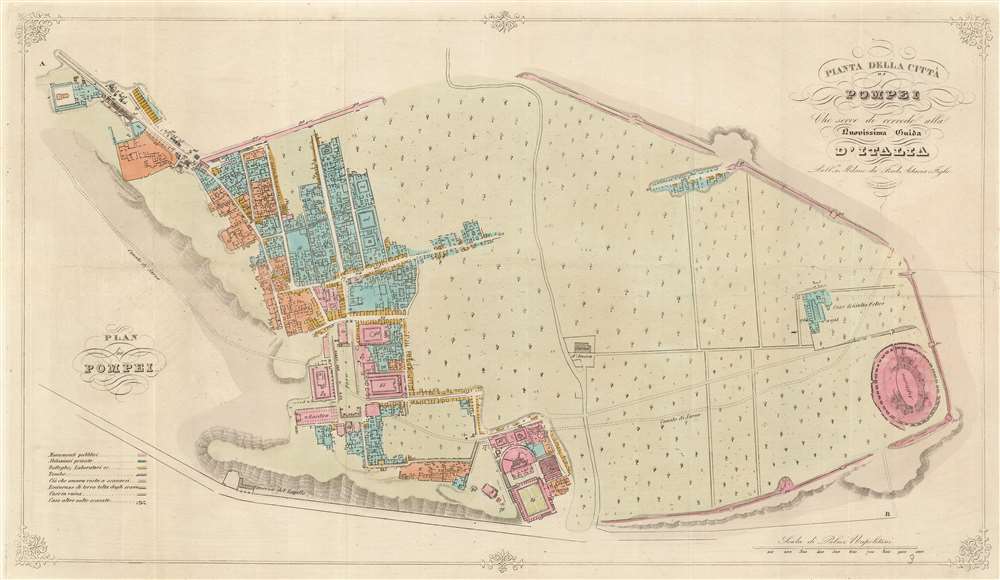 One of the world's greatest archeological treasures!
$300.00

This is an 1841 Ferdinando Artaria city plan or map of ancient Pompeii. The map depicts the famously devastated city from the Villa of Diomede to the amphitheater. Colors differentiate between public buildings, private buildings, buildings in ruins, and areas that had not yet been excavated. Numbers identify over 110 locations throughout the city, but unfortunately, the corresponding index has been lost. The Forum, Basilica, Amphitheater, and Giulio Felice house are identified by name.

Pompeii is an Italian city near Naples that was buried under nearly twenty feet of volcanic ash and pumice after an AD 79 two-day eruption of nearby Mount Vesuvius. The ash preserved the city, which provides the modern world with a snapshot of life during the Roman Empire. The city's lavish villas, including their art and furnishings, allow a glimpse into ancient Roman life. This fantastic piece of history has an uncanny side as well; archaeologists have found voids in the ash, marking the spot where humans died, which were then turned into plaster or resin casts. Pliny the Younger, a Roman author, lawyer, and magistrate wrote a first-hand account of the carnage and terror from across the Bay of Naples. Roman Emperor Titus visited the site once after the eruption, and again the following year, but the memory of the event soon fell away. Pompeii was then 'rediscovered' in 1592 when architect Domenico Fontana found part of the city's remains while digging an underground aqueduct. He told no one about his discovery, and the site remained largely undisturbed. It was not until 1738 when Herculaneum was discovered by workmen digging a foundation for Charles of Bourbon's (then the King of Naples) new summer palace. The site's spectacular nature drove more excavations, but the first scientific excavations began in 1749 and continued for the rest of the century. Progress exploded during the French occupation of Naples and Italy and continued throughout the 1800s and the early 1900s. The last large-scale excavations happened in the 1950s. Today, because of concern surrounding the site's preservation, excavations have mostly been halted, except for specific projects. Pompeii became a UNESCO World Heritage Site in 1997 and welcomes over 2.5 million tourists annually, making it one of the most-visited sites in Italy.

This map was created and published by Ferdinando Artaria in 1841. One example is cataloged in OCLC and is part of the collection at the Bibliothèque nationale de France.

Ferdinando Artaria (1781 - June 25, 1843) was an Italian publisher and seller of maps, music, and prints. Artaria opened his first shop around 1805. He soon began collaborating with Giuseppe Werz (1764 - 1827), who introduced lithographic techniques from Bavaria to Italy in 1808. Artaria opened his own lithography works in 1817 and the name changed to Ferdinando Artaria e Figlio in 1837. This business was the first to publish aquatints made from daguerrotypes. After Artaria died, his son Pasquale ran the business. He sold it to his brother-in-law Francesco Scacchi (1807 - 1900) in 1852, who changed the name of the firm to Ditta Artaria di Gerdinando Sacchi e figli' in 1872. After Scacchi's death, his sons Edoardo and Alberto ran the business until 1921, when it was acquired by the 'BOttega di Poesia' publishing house. Learn More...