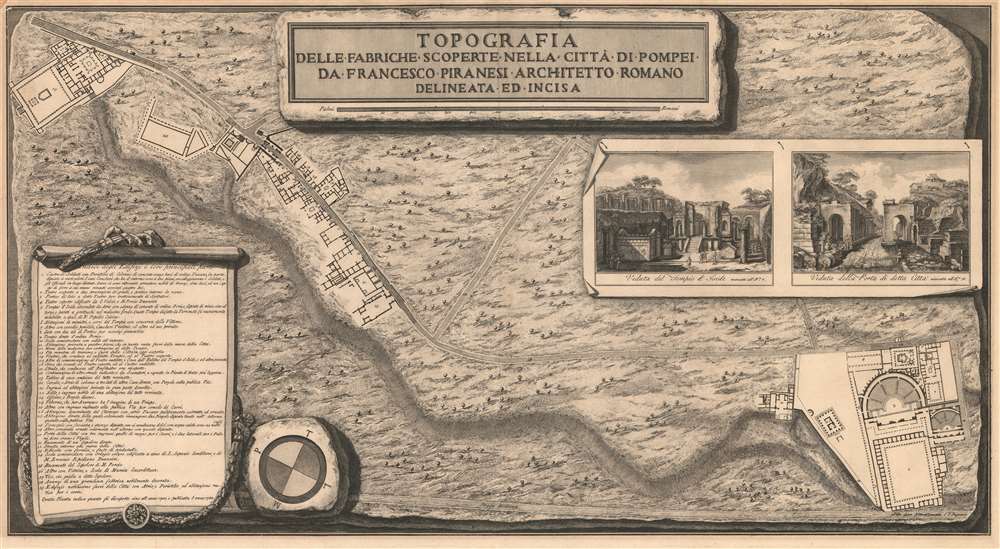 Illustrates ancient Pompeii only decades after its rediscovery.
$1,200.00

This is a 1785 Francesco Piranesi map of the ruins of Pompeii, Italy. The map depicts the ancient city in a fair amount of detail for 1785, especially since Pompeii was only rediscovered in 1748. Thirty-nine different structures throughout the site are numerically identified, including temples, villas, and roads, and correspond with an index situated in the lower left corner. Although it is difficult to determine exactly which sites are depicted here as the terrain does not exactly match that of the contemporary site, it is apparent that both the Teatro Grande and Teatro Piccolo are illustrated in the lower right corner, which also means that the buildings just above it are probably the Temple of Isis (Tempio di Iside). The other sites depicted here are much more difficult to identify. The large villa near the left border may be the Temple of Venus (Tempio di Venere) or Diomede's Villa (Villa di Diomede). Two inset views are situated on the right side and illustrate the Temple of Isis and a city gate.

This map was created and engraved by Francesco Piranesi and published in 1785. While it is well represented in institutional collections, it is scarce on the private market.

Francesco Piranesi (c. 1758 - January 23, 1810) was an Italian architect, etcher, and engraver. Born in Rome, Piranesi was the eldest son of the more famous Giovanni Battista Piranesi and continued his father's series of engravings of monuments and ancient temples. Piranesi was taught engraving by his father alongside his elder sister Laura (1755 - 1785) who was also a noted engraver. By 1775, Piranesi was producing his own work and assisting with this father's. Piranesi also studied engraving, landscape painting, and architecture with other experts. He accompanied his father on trips to Paestum, Pompeii, and Ercolano in 1770 and 1778 and completed a series of drawings of Paestum started by his father Giovanni Battista. Following his father's death in shortly after the second trip to Pompeii, Piranesi inherited his father's publishing house and printed many of the later editions of his father's work. Following the 1798 invasion of Italy by the French Revolutionary Army, which established a short-lived Roman Republic. Piranesi distinguished himself in the eyes of the French officials and was named to a government post. After the fall of the republic the following year, Piranesi and his brother Pietro moved to Paris, where they attracted the admiration of several officials, including Talleyrand. They opened a branch of their business in Paris, called Piranesi Frères, but by 1807 Pietro had sold his share of the business in Paris and returned to Rome. After his brother left Paris, Piranesi fell on hard times. Emperor Napoleon Bonaparte came to his aid and issued an imperial decree granting him the sum of 300,000 French francs if Piranesi would dedicate himself solely to engraving, as he was then considered to be the best engraver in Europe. However, Piranesi suddenly died before finishing the contract. It is rumored that he died of syphilis. Learn More...