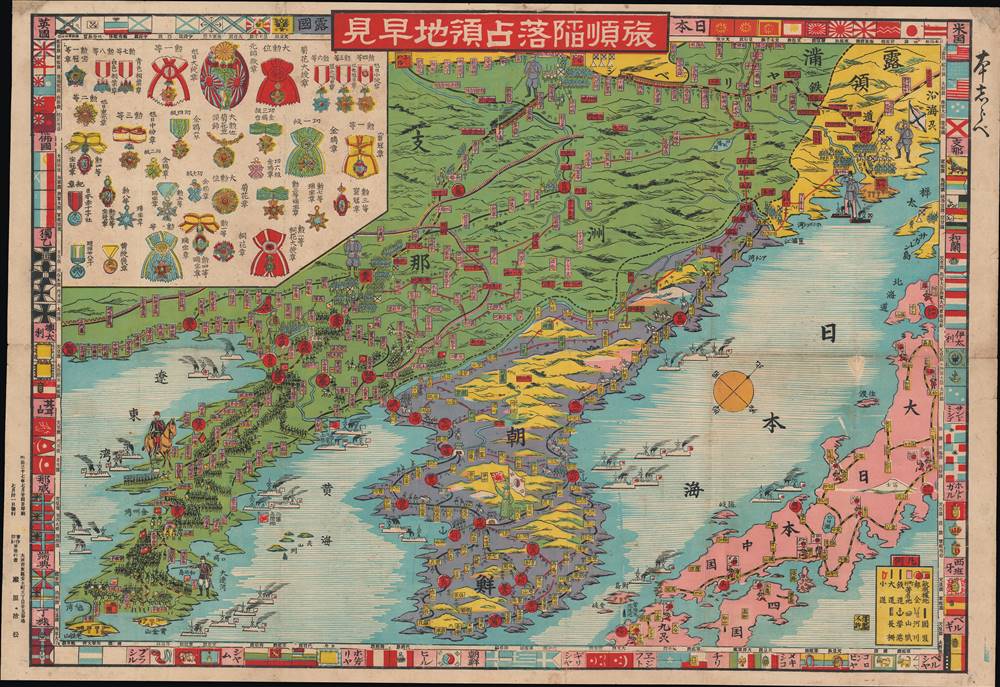 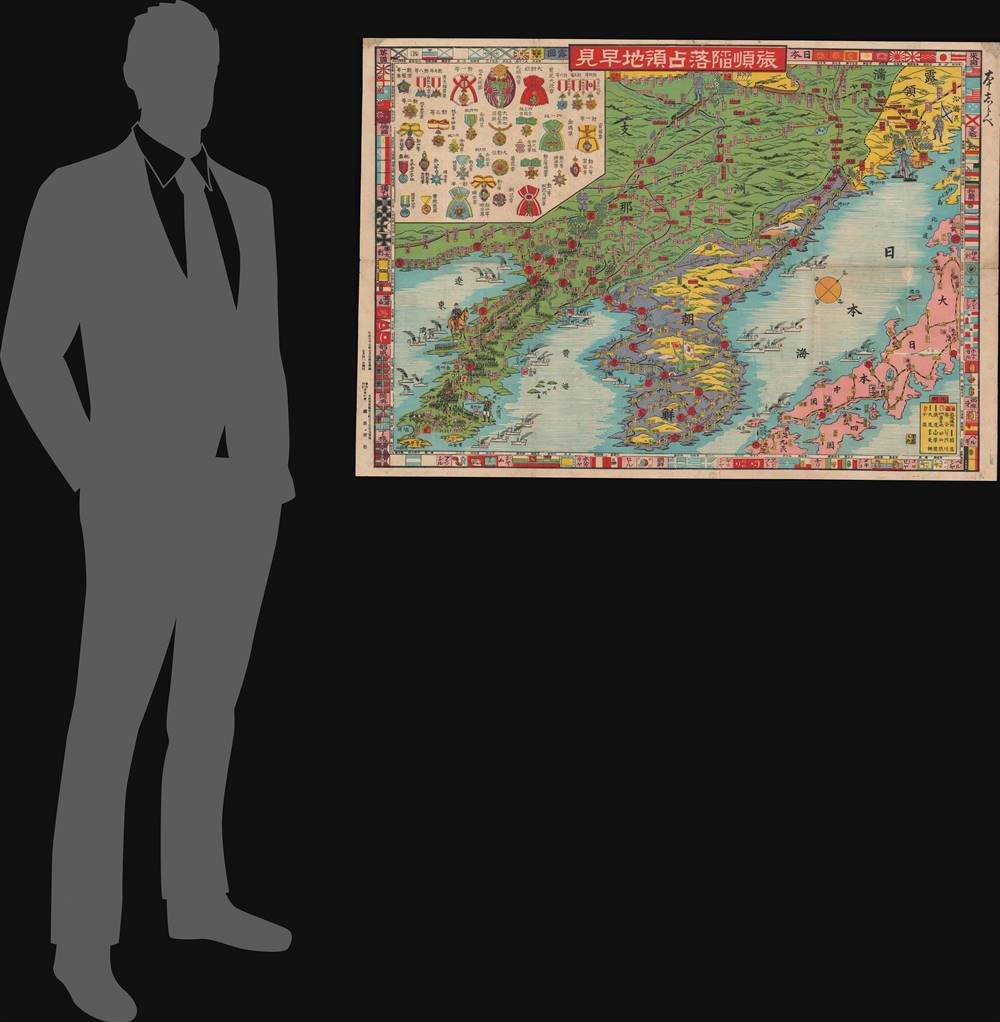 Propaganda map with a preemptive declaration of victory.

This is an exceptionally rare 1904 birds-eye view of Korea, Manchuria, Japan, and China, focusing on Port Arthur (Lüshunkou; 旅順口), made by Sehara Sutematsu during the Russo-Japanese War. The map's title is a bit presumptive. While Japan had won a series of victories just before the map's production and besieged the Russians in Port Arthur, the defenders would hold out until early January 1905.

Though the map's title refers to Port Arthur (at bottom-left), which would have been paramount in the news at the time, it takes in all of Manchuria, portions of the Russian Far East, Korea, and Japan. Major cities, fortifications, and the all-important rail lines are depicted. The national and naval flags of Asian, European, and American countries surround the map, while an inset at top-left shows medals and ribbons provided to Japanese units who fought in the conflict.

Cartoon figures represent Japanese, Russian, and Chinese troops (China was neutral in the conflict but supported Japan's position). The figures representing Russian troops pinned down at Port Arthur have their hands raised and hold white flags, again a bit of wishful thinking by Sehara.

Near Seoul (京城), a Korean figure raises both a Korean and Japanese flag. A common trope of Japanese propaganda during the war was that Koreans welcomed Japan's victory over Russia. While it is true that a portion of the Korean elite supported greater Japanese influence in Korea, much of the population was resentful of Japan's growing power over the preceding decades and looked to Russia as a counterbalance. Emperor Gojong initially sought to remain neutral in the Russo-Japanese conflict, but later volunteered thousands of Korean troops to the Tsar at the start of the conflict. With Russia expelled from Manchuria and with the U.S. agreeing to Japan's predominance in Korea (in the Taft-Katsura Agreement), the green light was given for Japan to increase its control in Korea, formally annexing it in 1910.

This map was made several months after the start of the conflict, which commenced with a major naval battle in February 1904 that was indecisive but resulted in the Russian Far East Fleet being bottled up at Port Arthur. In the following months, sporadic naval engagements led to tit-for-tat sinkings but no major change in the situation. Meanwhile, Japanese troops had landed in Korea and rapidly advanced to the Liaoning Peninsula. But they saw only slow and costly progress against the heavily fortified Russian positions approaching Port Arthur. Nonetheless, in the weeks before this map was issued, several strategic positions had been taken near Port Arthur, and soon afterwards the Japanese made considerable progress further inland in Manchuria.

Massive artillery pieces were brought in to attack the fortifications at Port Arthur and the Russian ships still in the harbor. The Japanese were able to advance slowly with heavy losses while also utilizing the new heavy artillery and sapper operations. With the prospect of reinforcements dim and disease decimating their troops, Russian commanders surrendered Port Arthur on January 2, 1905. Meanwhile, the Russian Baltic Fleet, which had spent months crossing the globe to relieve Port Arthur, learned of the Japanese conquest of the stronghold en route but had no choice but to press on towards Vladivostok. The fleet was intercepted and destroyed in the Straits of Tsushima in late May 1905, effectively ending the war.

The Russo-Japanese War, fought from February 8, 1904 - September 5, 1905, pitted Imperial Japan against Tsarist Russia over rival imperial ambitions in Manchuria and Korea. Both Russia and Japan had grand visions for the region. Russia traditionally had only one Pacific port, Vladivostok, which was operational only during the warm summer months. In 1898, Russia coerced China, then weakened after the First Sino-Japanese War (1894 - 1895), to lease them Port Arthur, a warm water port on the Liaodong Peninsula. They also negotiated a right-of-way to connect Port Arthur to the China Eastern Railway, which ran from nearby Jinzhou (Dalian, Dalniy) to Harbin, and ultimately linked up with the Trans-Siberian Railway. Port Arthur was thus the cornerstone of a sphere of influence covering Manchuria and Korea.

Japan had its own imperial ambitions and saw itself as the natural overlord in East Asia, particularly after their victory in the First Sino-Japanese War (1894-1895). Korea and Manchuria were also important to the Japanese as steppingstones into China, with its seemingly unlimited resources.

There was initially some attempt at negotiation between the imperialist powers, and the Japanese leadership was far from unified on a decision to attack Russia given the size of Russia's military and the high financial costs of a war. But the hawks won the debate, while Tsar Nicholas II arrogantly believed it impossible that Japan could challenge a major European power. Japan proved him wrong, launching a surprise attack on the Russian Eastern Fleet stationed at Port Arthur. The Russians were unable to defeat the Japanese at sea and steadily lost ground on land, despite imposing heavy losses on the attackers. A series of embarrassing defeats, the costs of the war, and simmering discontent forced the Tsar to negotiate and U.S. President Theodore Roosevelt arbitrated a peace, confirmed by the Treaty of Portsmouth.

The overwhelming victory of Imperial Japan came as a surprise to international observers, being the first major military victory in the modern era of an Asian over European power. The consequences transformed the balance of power and confirmed Japan as the pre-eminent power in East Asia.

This map was printed on July 24, 1904 (Meiji 37) and published a week later on July 31. It was drawn, printed, and published by Sehara Sutematsu (瀨原捨松). It is not known to exist in any institutional holdings and is extremely scarce to the market.

Sehara Sutematsu (瀨原捨松; fl. c. 1883 - 1930) was a Japanese artist and occasional cartographer based in Osaka. The Japanese military was often the subject of his drawings, including portraits of generals and admirals. Learn More...