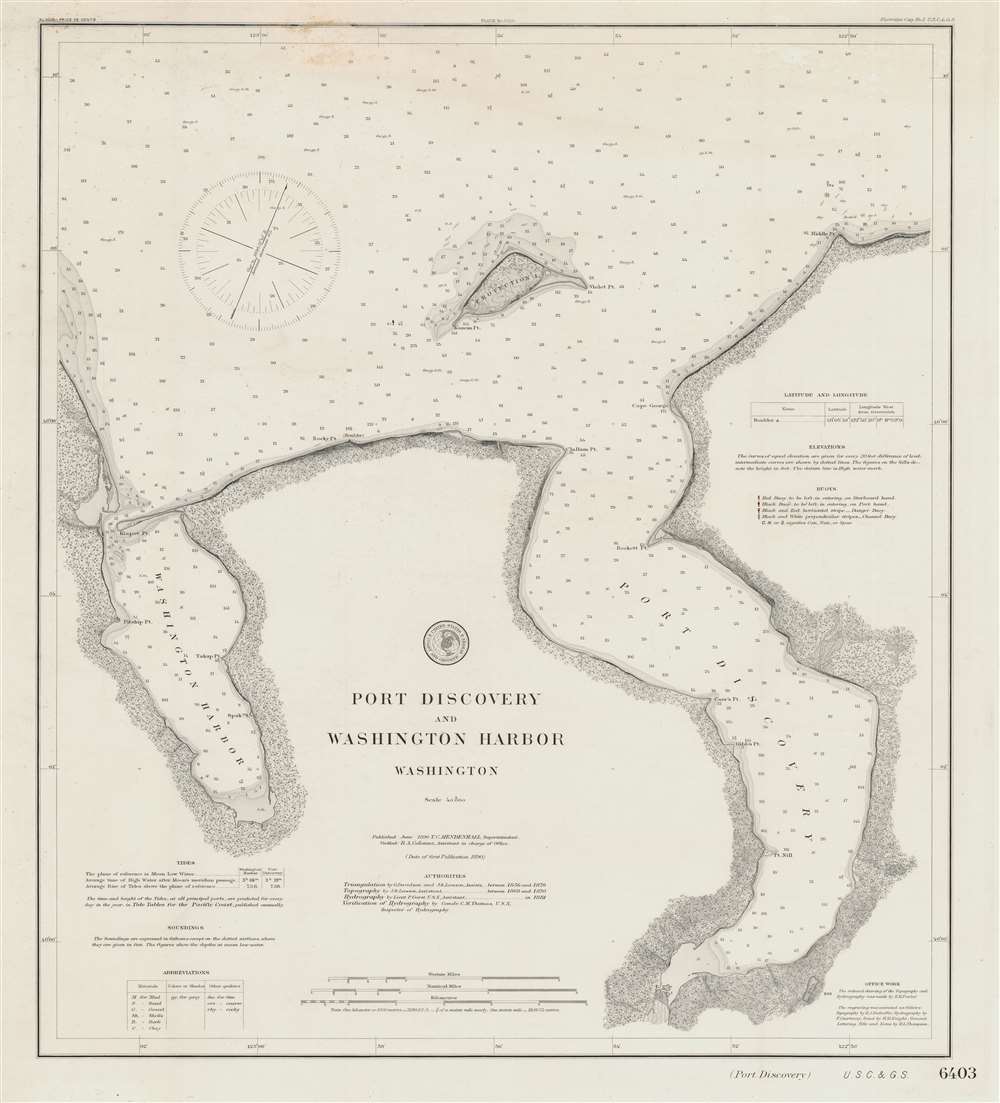 Named by George Vancouver after his ship the Discovery.

This is an 1890 U.S. Coast and Geodetic Survey nautical chart or maritime map of Discovery Bay, Washington. On the south side of the Strait of Juan de Fuca on Washington's Olympic Peninsula, here the bay is identified by its historical name, Port Discovery. Both Discovery Bay and Washington Harbor are illustrated in detail. Numerous depth soundings (in fathoms) provide a clear picture for mariners, and points along the coastline are labeled. Protection Island sits in the Strait of Juan de Fuca.

Europeans first visited Discovery Bay in 1790, when Manuel Quimper arrived in the bay in his ship Princesa Real. He named the bay Puerto de Quadra. The following year, Francisco de Eliza used the bay as a home base to further explore the area. George Vancouver, when he visited the Strait of Juan de Fuca in 1792, named it Port Discovery after his ship the Discovery. Port Discovery served as an important waypoint for ships crossing the Pacific until the mid-20th century and was an important stopping point for American ships during World War II.

This map was created by the U.S. Coast and Geodetic Survey from triangulation, topographic, and hydrographic data collected between 1856 and 1881. It was published by the U.S.C.G.S. in 1890 while T.C. Mendenhall was superintendent. Two examples are cataloged in OCLC and are part of the institutional collections at Stanford University and the San Francisco Maritime National Historical Park Maritime Research Center.


Thomas Corwin Mendenhall (October 4, 1841 - March 23, 1924) was an American physicist and meteorologist who was self-taught. Born in Hanoverton, Ohio, Mendenhall's parents were ardent abolitionists who regularly sheltered runaway slaves fleeing north along the Underground Railroad at their home outside Akron, Ohio. In 1858 Mendenhall became the principal of the local primary school and soon received an Instructor Normalis degree from National Normal University. He taught at several schools around Ohio and earned a reputation as an impressive teacher and educator. He was appointed professor of physics and mechanics at the Ohio Agricultural and Mechanical College (which became The Ohio State University) in 1873, making Mendenhall the first member of the original faculty at Ohio State. In 1878, he received the first honorary Ph.D. from Ohio State. He was recruited help modernize Meiji Era Japan in 1878 as one of the hired foreigners. He held a position as a visiting professor at Tokyo Imperial University until 1881, when he returned to Ohio. During his time in Japan, he founded a meterological observatory, deduced a value for the mass of the Earth, measured the wavelengths of the solar spectrum, and was one of the founders of the Seismological Society of Japan. In 1884, he became a professor at the U.S. Signal Corps and helped establish stations to systematically observe earthquakes in the U.S. He served as President of the Rose Polytechnic Institute in Terre Haute, Indiana, from 1886 until 1889, when he became the Superintendent of the U.S. Coast and Geodetic Survey. During his tenture as superintendent, Mendenhall issued the Mendenhall Order, which changed the fundamental standards of length and mass used by the U.S. Coast and Geodetic Survey from standards based in England to metric standards. During his tenure as superintendent he oversaw the establishment of the national boundary between Alaska and Canada. He also invented the Mendenhall Gravimeter in 1890, which was used by Albert A. Michelson to measure the speed of light. He then served as President of the Worcester Polytechnic Institute from 1894 until 1901, when he emigrated to Europe, returning to the U.S. eleven years later. He served as a member of the Board of Trustees of The Ohio State University from 1919 until his death in 1924. Mendenhall married Susan Allan Marple in 1870 with whom he had one child. Learn More...