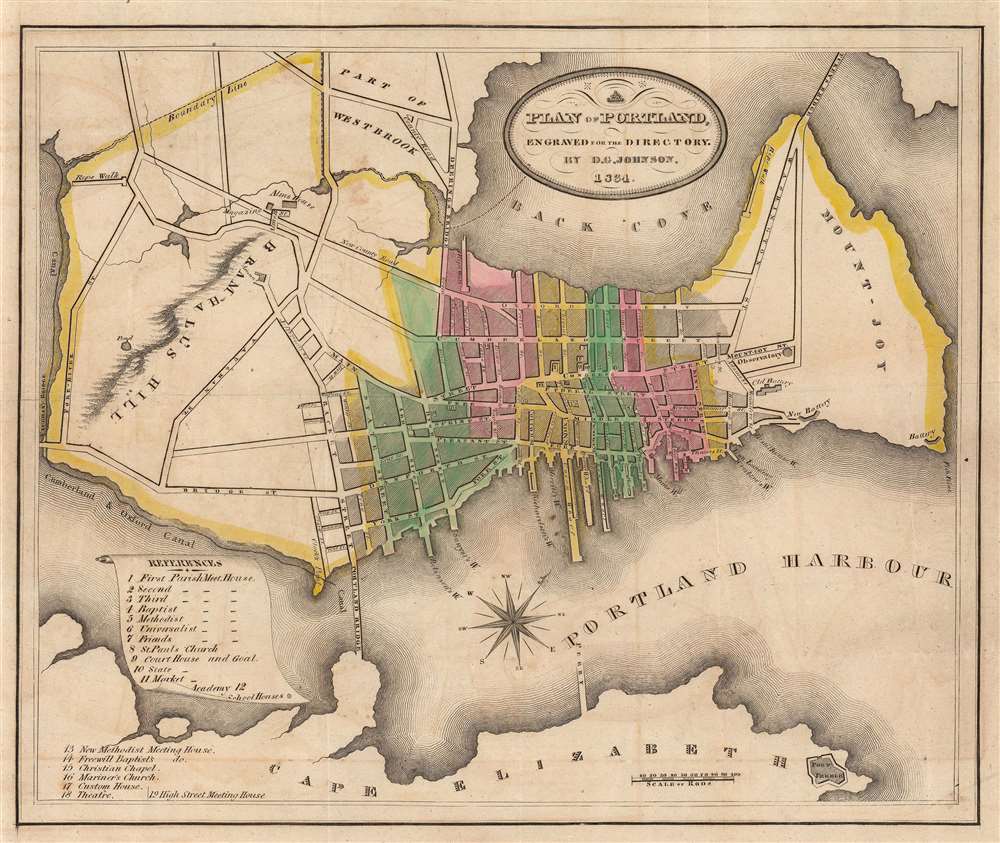 A rare map of Portland Maine engraved in 1834 by D. G. Johnson. Oriented to the northwest this map covers peninsular Portland from the Pore River to Portland Harbor, including parts of adjacent Westbrook and Cape Elizabeth. Portland's development at his point was confined to the isthmus between Bracket Street and Washington Avenue. This map thus significantly predates the extensive development of Portland's east end, then known as Mount-Joy, today referred to as Munjoy Hill. Color coding identifies city wards and a reference table in the lower left quadrant notes 12 important civic and religious centers.

This map is quite rare. There is some indication that it may have been issued as early as 1831. Other examples, with a different imprint and numerous updates, but clearly from the same plate, were issued as late as 1846. The cartographer, identified here as D. G. Johnson, is very likely to be D. Griffing Johnson, an enigmatic but important cartographic figure active primarily in New York City before the American Civil War. If it is the same Johnson, then this is his earliest known may be more than 15 years.

D. Griffing Johnson (fl. c. 1831 – c. 1862) is a most mysterious but significant American mapmaker active in New York during the decades preceding the American Civil War. Our knowledge of him is scant and even his first name is a mystery. What we know is that D. Griffing Johnson was an engraver active in New York in the first half of the 19th century. His earliest maps date to the 1840s (although he may have engraved a map of Portland, Maine, as early as 1831). At some point we know that D. Griffing Johnson headed west. The only record of his actual westward journey is that one 'D. G. Johnson' (our guy?) traveled to California or Oregon with a missionary party in 1839. We know for a fact that Johnson was at Sutter’s Mill when gold was discovered in 1848 though he must have returned to New York shortly afterward to issue his important map of North America. D. Griffing Johnson’s first map work with Colton was in 1846 or 1847 and his first work with A. J. Johnson was in 1854. In 1855 he had an office at 7 Nassau Street, New York. Regarding D. G. Johnson’s disappearance c. 1860 – 62 we can only speculate, however, that it related to the outset of the Civil War is likely. Most references to individuals of this name (there are several including a Dickson and a David) are from southern families hailing from Mississippi, Louisiana and Virginia. One such individual, Dickson G. Johnson is known to have died in a battle near Richmond in 1862. Learn More...