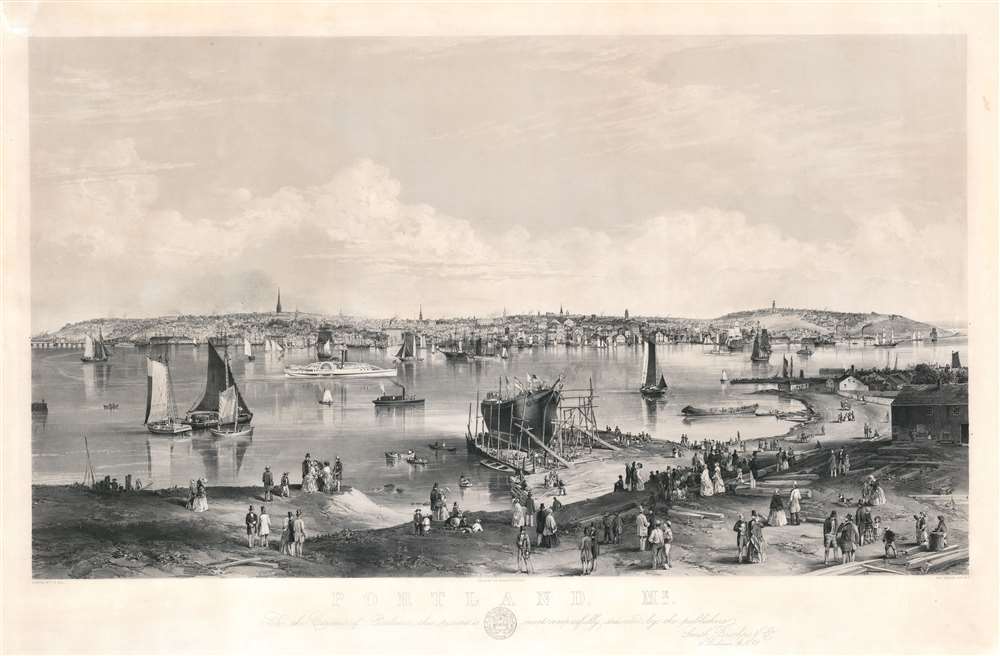 Euphemistically known as the 'Launching Print,' this 1855 first edition view by John William Hill is perhaps the best-known image view of Portland, Maine predating the 1866 Great Fire of Portland and the American Civil War (1861 - 1865). The view looks on Portland from the shores of Cape Elizabeth to the southwest, across the Fore River, with Casco Bay on the right. It reveals a lively city with a bustling port. On the Fore River, just left of center, the steam ship Daniel Webster stands out. At the right-hand side of the print Munjoy Hill land the Observatory are apparent. In the foreground a large ship is in dry dock is nearly ready to launch and spectators line the shore waiting for the event, hence the euphemistic name, 'Launching Print.'

This map is based upon a painting by John William Hill, now lost. It was engraved by Charles Parsons Lithography of New York, and printed by Endicott and Company. The view was published by the Smith Brothers under the management of Benjamin Franklin Smith, 59 Beekman St. Although we are aware of only one edition by Smith, published as here in 1855, the view was greatly admiring in its day and plagiarized in smaller modified formats by other publishers. Curiously, the OCLC identifies only one institutional holding, at Harvard, however, we are aware of at least 3 others of this first edition in private hands.

John William Hill (January 13, 1812 – September 24, 1879) is a British-American landscape, still life, and view artist based primarily in New York City. Hill born in London, the son of aquatint engraver, John Hill. His family emigrated to the United States, settling in Philadelphian, in 1819. In 1822, they relocated to New York and opened an aquatint shop, at which J.W. Hill began an apprenticeship. In his early twenties, Hill began work for the New York State Geological Survey, producing topographic studies and overhead views of American cities and towns. There he developed a flair for rendering minute architectural detail and creating highly accurate perspectives. By the 1850s Hill embraced Pre-Raphaelite panting styles and represented that school in the United States. He was a founding member of the Society for the Advancement of Truth in Art.


Benjamin Franklin Smith (1830 – 1927) was an artist, printer, and publisher of American city views active in the mid to late 19th century. Smith was born in South Freedom, Maine where he grew up on the family farm. His work is most commonly associated with his brothers, all of whom worked in the view-making industry, publishing both individually and separately as Smith Brothers. His brothers were Francis Smith, George Warren Smith, and David Clifford Smith. Among the brothers Benjamin, the youngest, was the most artistic, producing views as early as 1846, when he was 16. He drew his first city view, Albany as seen from the Hudson, at 17. Benjamin and his brothers initially worked as sales agents for viewmaker Edwin Whitefield. In 1849, the Smiths broke with Whitefield and began publishing under their own imprint, Smith Brothers. Benjamin Franklin drew at least four of the Smith Brother's views, and possibly significantly more. Reps suggests that the firm stopped publishing in 1855, but at least two important views, the 1857 Smith-Hill-Mottram view of Boston and the 1862 Smith view of Elmira, were issued later. Although both bear the Smith Brothers imprint, they were copyrighted by Benjamin Franklin Smith and are more likely than not, unassociated with the other brothers and their earlier views. In any case, the Smith firm was sold at an enormous profit in 1855, making the family extremely wealthy. They furthered their fortunes by investing in railroads. At the time of his death in 1927, Benjamin Franklin Smith was believed to be the richest man in Maine.


Charles Parsons (1821 - November 9, 1910) was an American artist and lithographer active in New York. Parsons was born in Hampshire, England in 1821. He emigrated to the united States at 9, apprenticing as a lithographer under George Endicott from 1833. Parsons produced numerous views and lithographs for Endicott and Company, but also engraved or Nathaniel Currier, later Currier and Ives. In 1863 he became the art director for Harper’s Publishing, a position he held until 1889, when he retired. Parson's was influential in the development of American illustration and lithography. His son, Charles R. Parsons, was also an artist based first in Manhattan, then Brooklyn.

Very good. Laid down on archival paper to increase stability.