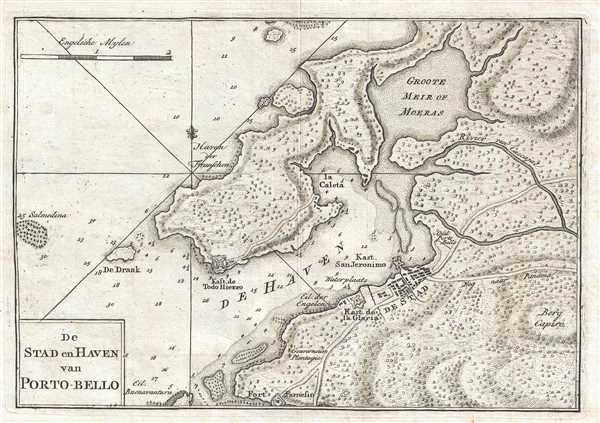 One of the major ports on the Spanish Main for exporting Peruvian silver back to Spain.
$200.00

This is a 1765 Isaak Tirion map of Portobelo, Panama and its bay on the Spanish Main. The map depicts the town of Portobelo, Fort Gloria, and the immediate vicinity, including the harbor and Fort Todo Fierro, constructed across the harbor from Portobelo. Three forts: Fort Gloria, Fort San Jeronimo, and Fort Todo Fierro, are illustrated and labeled, referring to Portobelo's crucial role as a point of export on the Spanish Main. Depth soundings are included along the main approaches to and throughout the harbor.

As stated above, Portobelo served as one of the key ports on the Spanish Main on the route of Spanish treasure fleets from the 16th through the 18th century. This fact meant that Portobelo suffered attacks by both pirates and foreign militaries. Thus, the construction of strong fortifications on all sides and approaches to the harbor, hoping to prevent, or fight off, these attacks. Privateers attacked and plundered the city numerous times, while the British attacked mostly during the mid-18th century. During what became known as the War of Jenkins' Ear, Portobelo was attacked and captured by a British fleet led by Admiral Edward Vernon on November 21, 1739. Portobelo never recovered from this attack, as the Spanish changed their tactics and moved their export operation in Panama to Chagres. It wouldn't be long, however, before the Spanish completely changed their operations and began rounding Cape Horn instead of traversing Panama and exporting their riches from the Spanish Main. The fortifications at Portobelo and at Chagres are now UNESCO World Heritage sites.