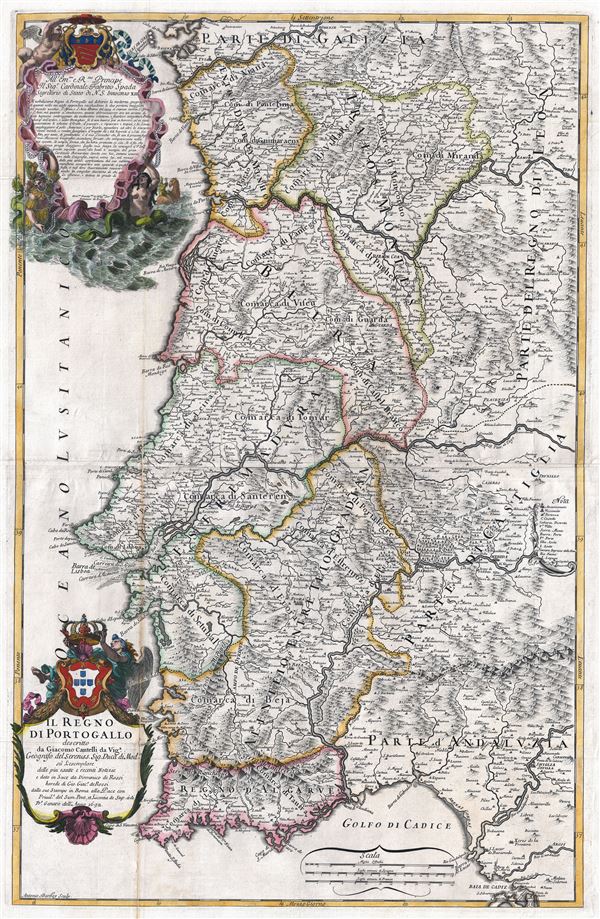 One of the most beautiful baroque maps of Portugal to appear in the 17th century.

An exceptional 1692 map of the Kingdom of Portugal drawn in the Italian baroque style by Giacomo Cantelli da Vignola and Giacomo Giovanni Rossi. This extremely scarce map is without question one of the largest and most beautiful atlas maps of Portugal ever issued. The map covers Portugal from Vigo (Spain) to Capo di. S. Vincenzo (Cape St. Vincent) and eastward to the Gulf of Cadiz. Topography is rendered in profile. An explanation of the map appears at right center and a triple scale is presented in the lower right quadrant. The map features two elaborate cartouches. The first, appearing in the upper left quadrant features two mer-people supporting a modified scallop shell frame containing the a dedication to Fabrizio Spada (Fabrino Spada), cardinal of the Roman Catholic Church under Pope Innocent XII. The primarily title cartouche is set in the lower left quadrant and features the royal crest of Portugal, a stately crown, angels, and still more scallop shells. Rossi prepared this map for inclusion in the 1692 second edition of the Mercurio Geografico, one of the finest Italian Baroque atlases ever issued. Engraved by Antonio Barbey.


Giovanni Giacomo De Rossi (1627 - 1691) was an Italian printer and publisher active in 17th century Rome. Giovanni inherited the important Rome based printing business originally founded by his father, Giuseppe de Rossi (1570-1639), in 1633. It was hard work and dedication, from 1633 to 1691, that ultimately pushed the firm to the heights of its success. By the mid-17th century the Rossi firm was considered the most active and important press in Rome. Cartographically most of Rossi's work was issued in conjunction with the mapmaker Giacomo Cantelli da Vignola, with whom he issued the remarkable Italian baroque Atlas Mercurio Geografico. In addition to maps, the Rossi firm produced a vast corpus of prints that include the work of Gimbattista Piranesi (1720-1778), Benedetto Castiglione (1609-1665), Pietro Testa (1612-1650) and Giovan Francesco Grimaldi (1606-1680). The Rossi firm continued to flourish though several generations. In 1738 it was renamed Calcografia Camerale. More than 100 years later, in 1870 the Calcografia Camerale was again renamed Tegia Calcografica which it remained until 1945. Today the former Rossi press is known as the Calcografia Nazionale and is a free museum located at 6 Via della Stamperia, Rome. The print and printing plate collections of the Calcografia Nazionale are among the largest and most important in the world. Learn More...

Very good. Minor toning and verso repairs along one fold line. Else clean. Blank on verso. Platemark visible.
Looking for a high-resolution scan of this?