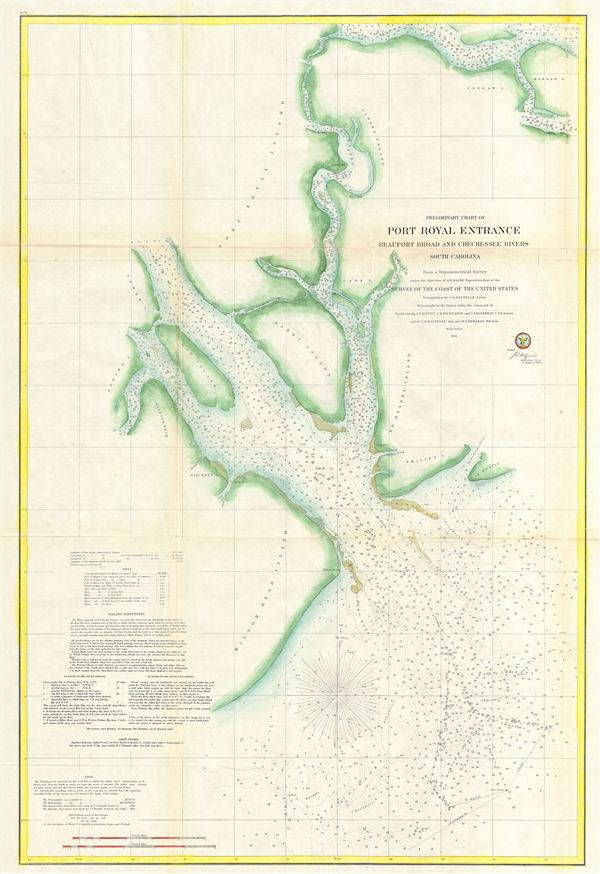 A fine example of the U.S. Coast Survey nautical chart or maritime map of Port Royal entrance, South Carolina. Port Royal entrances is an inlet from the Atlantic between Savannah, Georgia and Charleston, South Carolina. This map identifies the entrance to the Port Royal Sound between Hilton Head Island and St. Helena Island. It follows the Beaufort Broad and Chechessee Rivers northwards as far as Port Royal Island, Beaufort and Morgan Island. The chart features countless depth sounding as well as notes on shoals, sailing directions, tidal tables, and other valuable information for the mariner. The triangulation for this chart was completed by C. O. Boutelle. The hydrography was accomplished parties under the command of J. N. Maffit, C. M Fauntleroy, J. P Bankhead, C. O. Boutelle, and W. S. edwards.. Issued under the supervision of A. D. Bache for the 1862 edition of e U.S. Coast Survey Superintendent's Report.

Very good. Some wear and discoloration on original fold lines. Backed on archival tissue for stability.