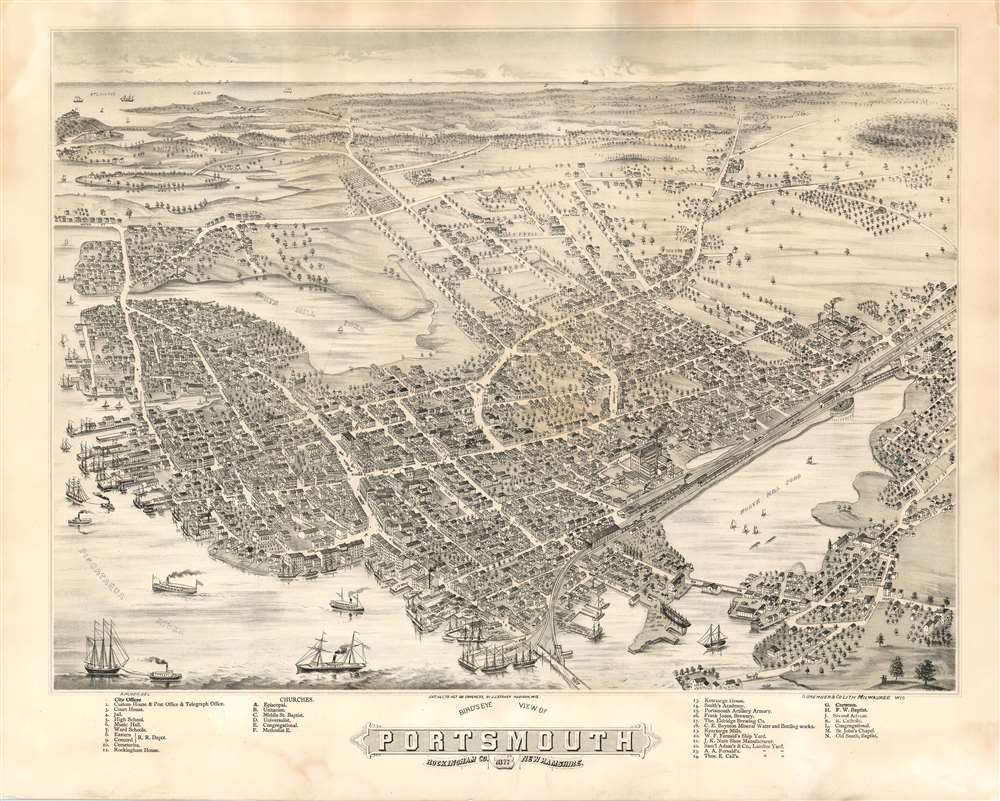 A rare and highly-detailed Albert Ruger and Joseph Stoner bird's-eye view map of Portsmouth, New Hampshire. The view looks south on Portsmouth from an imaginary high point above Badger's Island. The map centers on the juncture of the Piscatuaqua River and the North Mill Pond. The South Mill Pond (Sagamore Creek) is visible in the distance, as is the Atlantic. Streets are named and individual buildings rendered. Of note are some 36 alphanumerically associated locations, among them civic offices, churches, academies, breweries, churches, lumber yards, and more. The W. F. Fernald Shipyard where is large sailboat is under constructions. Other notable commercial buildings depicted include the Frank Jones Brewery, the Eldridge Brewing Company, and the Kearsarge Mills. Ships, both sail and steam, ply the busy harbor which is connected by the Eastern and Concord Rail Road to locations inland.

This view is based upon a drawing by Albert Ruger. It was engraved and lithographed in Milwaukee, Wisconsin by D. Bremmer and Company. Examples are scarce in collections, with known holdings in the Library of Congress, New Hampshire Historical Society, and Pennsylvania State University Libraries. No record on the private market.

Albert Ruger (August 29, 1828 - November 12, 1899) was an important Prussian-American viewmaker active in the mid to late 19th century. Ruger was born in Prussia and immigrated to America as a young man sometime before 1850. He lived for a time in Akron, Ohio, where he was an apprenticed stone mason. By 1860, he had his own journeyman and apprentice. Near the end of the American Civil War, Ruger enlisted with the 196 Ohio Infantry. His first views date to this period and illustrate Union camps and an 1865 view of Columbus, where he was stationed. Discovering a talent for viewmaking, Ruger abandoned his work as a stonemason to move to Battle Creek, Michigan, and pursue a new career. Like most view makers, Ruger's views were sold by subscription and most were self-published. Ruger worked with a variety of other view makers and publishers, among them Eli S. Glover, Thaddeus M. Fowler, Joseph J. Stoner (Ruger and Stoner), and Augustus Koch. Ruger's work is distinctive, presenting cities from an exceptionally altitudinous perspective, giving his views a notably maplike quality Moreover, Ruger is significant in the corpus of view making. He is considered the first American viewmaker to achieve commercial success. Moreover, he is noteworthy not only for the quantity of his views, about 175, but also for the subject matter, focusing on southern and western cities following the Civil War. Ruger died in Akron, Ohio, at 71. Learn More...


Joseph John Stoner (December 21, 1829 - May 1917) was a Madison, Wisconsin based publisher of bird's-eye city views active in the late 19th and early 20th centuries. Stoner was born in Highspire, Pennsylvania and apprenticed as a carver of ornamental chairs before turning to publishing. He partnered with the bookseller Ephraim T. Kellogg of Madison, Wisconsin, for whom he was a traveling agent. His career in views began around 1867 when he met and befriended the bird's-eye view artist Albert Ruger, who was sketching Madison that year. Ruger and Stoner partnered and began publishing city views under the imprint 'Ruger & Stoner.' The partners traveled extensively through the Midwest publishing some 11 city views under their joint imprint - although there may be as many as 62 others unattributed. The partnership partially dissolved in 1872 although they continued to work together on a contractual basis. Stoner subsequently traveled even more extensively, hiring young artists to sketch city views in such wide ranging destinations as Texas, Maine, and Oregon, among others. He produced a total of some 314 views with various artists including: Albert Ruger, Herman Brosius, Thaddeus M. Fowler, Augustus Koch, Albert F. Poole, Henry Wellge, Joseph Warner, and Camille N. Drie (Dry). Stoner died in Berkeley, California in 1917. Learn More...


D. Bremner (fl. c. 1870 - 1890) was an American lithographer based in Milwaukee, Wisconsin in the middle to late 19th century. Bremner printed views for a number of important 19h century American viewmakers, including Albert Rugers and Joseph J. Stoner. Learn More...