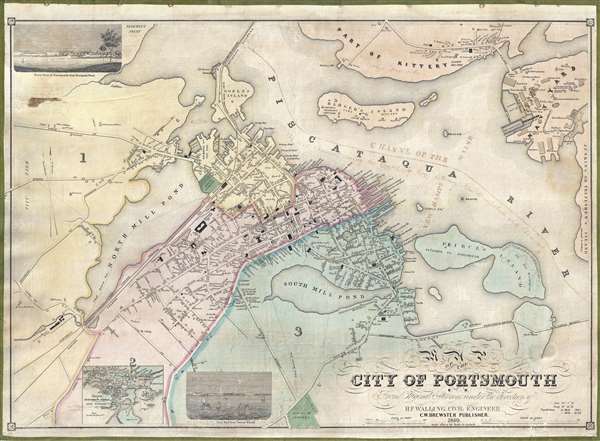 A very scarce 1850 Henry Francis Walling map of Portsmouth, New Hampshire and Kittery, Maine. Walling began publishing separately issued town plans on his own account in 1850, making this one of his earliest maps. Moreover, of Walling's nearly 150 separately issued town plans, this is one of the largest scale and most highly detailed. With a scale of 1: 3960, Walling meticulously maps nearly every individual building in both Portsmouth and Kittery, many of which are labeled according to the property owner. Civil, religious, and government buildings are distinguished from residential properties by being rendered as darker blocks. Several sites are of note, such as Frederick Fernald and William Pettigrew's Shipyard on Badger's Island, established 1844, the Portsmouth Athenaeum, Brick Market, the Boston and Portland Railroad Depot, and more. The Kittery Navy Yard is exceptionally well delineated, with individual buildings noted according to its location and purpose. There are two vignettes, one a River view of Portsmouth from Freeman's Point, and another view of the Navy Yard from Central Wharf. An inset map appears in the lower left quadrant detailing the Portsmouth Harbor vicinity (1 : 80000). This map has several manuscript annotations, most of which are faded. These including the identification of the Main-New Hampshire border on the Piscataqua River, notations in Kittery, and an unreadable annotation in the upper right, as well as several smaller notes.

This map was drawn by Henry F. Walling based upon earlier survey work supplemented by Walling's own surveys. It was published by Charles Warren Brewster in 1850, in the same year that representatives met to write New Hampshire's Constitution, suggesting that Brewster, who was a member of the Constitutional Committee, may have published this to capitalize on feelings of regional pride and New Hampshire solidarity. It is extremely rare. The OCLC identifies only 5 examples held in instructional collections. We are aware of 3 additional examples in private hands.


Charles Warren Brewster (September 13, 1802 – August 3, 1868) was a Portsmouth, New Hampshire, based printer and writer active in the first half of the 19th century. Brewster was born in a distinguished New Hampshire family and can trace his ancestry to Elder William Brewster, a passenger on the Mayflower. As a young man, Brewster apprenticed in the offices of the Portsmouth Journal. He took over the journal in 1838 and continued to publish the paper for more than 50 years. Brewster served several terms as a Whig in the New Hampshire Legislature and was a participant in the 1850 – 1851 New Hampshire State Constitutional Convention. Brewster's most influential work is his volume of local character sketches, Rambles About Portsmouth. Learn More...

Very good. Professionally restored and laid down on fresh linen.