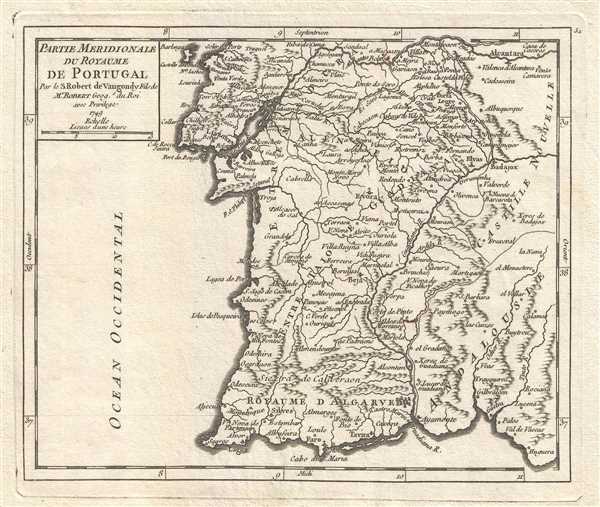 Map of southern Portugal depicting Lisbon and the Algarve, Portugal's most visited region.
$180.00

This is a 1749 Vaugondy map of southern Portugal, including Lisbon (Lisbonne). The map depicts from Tagus (Tajo) River to the Atlantic Ocean and from the Atlantic Ocean to Castile and Andalousia in Spain. The Algarve region of Portugal, the southernmost region of continental Portugal, is illustrated here. The Algarve is the most popular tourist destination in Portugal and, including both foreign and Portuguese tourists, welcomes nearly 10 million visitors annually. Faro, the region's administrative center and host of the region's international airport ad public university, the University of Algarve, is labeled, located along the southern coast.

The Kingdom of Algarve (Royaume d'Algarve) was presented as a separate kingdom from that of Portugal, but it was in fact the second dominion of the Portuguese crown. The Algarvian kingdom had no institutions, special privileges or autonomy. It was just an honorific title for the Algarve region based on its history.

Numerous cities and towns are labeled, including Lisbon which sits at the mouth of the Tagus River, and several other rivers are depicted, both labeled and unlabeled. Hills and forests are depicted in profile.