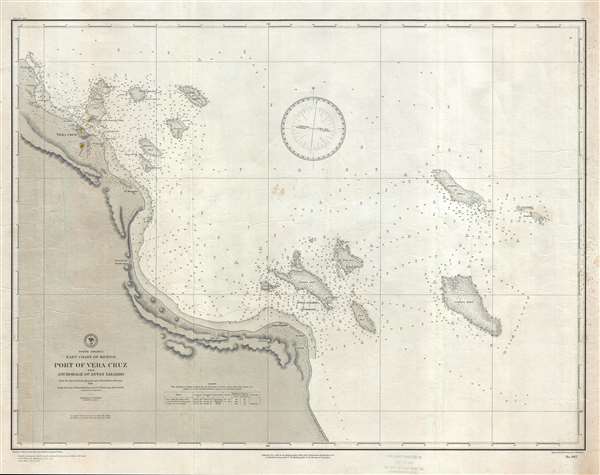 This is an 1891 U.S. Navy Hydrographic Office nautical chart or maritime map of the port of Veracruz, Mexico and the anchorage of Anton Lizardo. The map depicts the coastline of Mexico from Point Gorda to Anton Lizardo and further south. Several points along the coast are labeled, including Veracruz, Vergara, the mouth of the Medellin River, and several points. Veracruz is depicted in detail, with individual buildings rendered along with the piers in the port and the city's fortifications. The Castle of San Juan de Ulloa is illustrated in its emplacement across the bay from Veracruz. A note is included that moles are under construction at Veracruz and that the northern entrance to the city is closed. The Anton Lizardo Anchorage is also labeled, along with several reefs which lay off the coast of both Vera Cruz and Anton Lizardo. Myriad depth soundings are indicated, with depths noted in fathoms. In the lower left corner, next to the title, a table bears information about lights along the coastline, two of which are located at convents.

This map was issued on September 15, 1891, per a stamp located on the bottom margin, by the Hydrographic Office.

Very good. Heavy soiling along right border. Blank on verso.
Looking for a high-resolution scan of this?