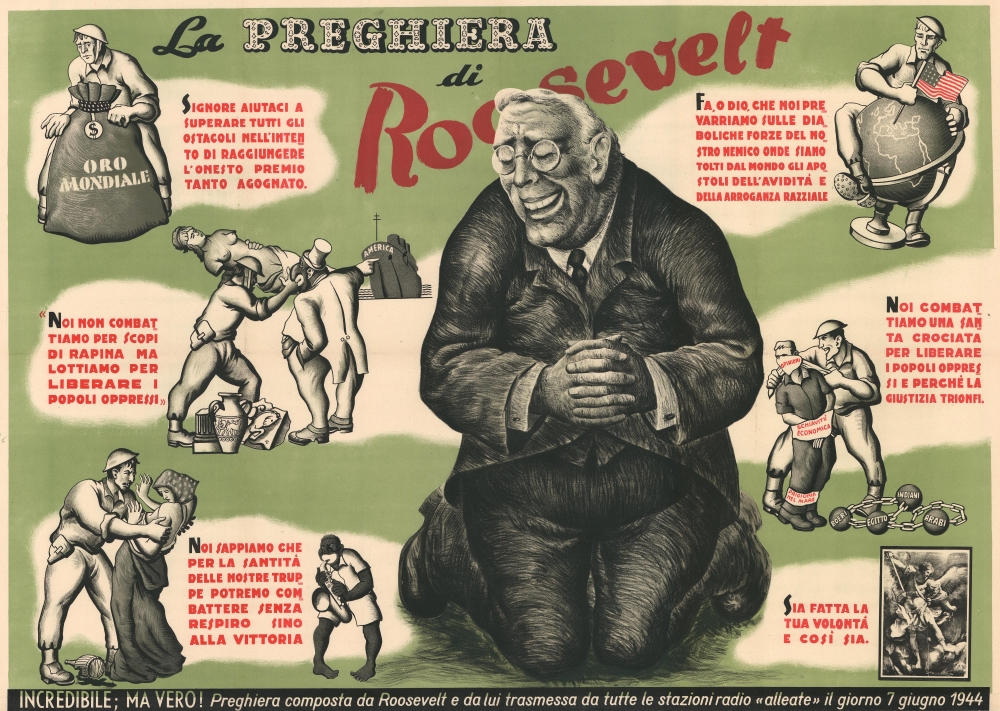 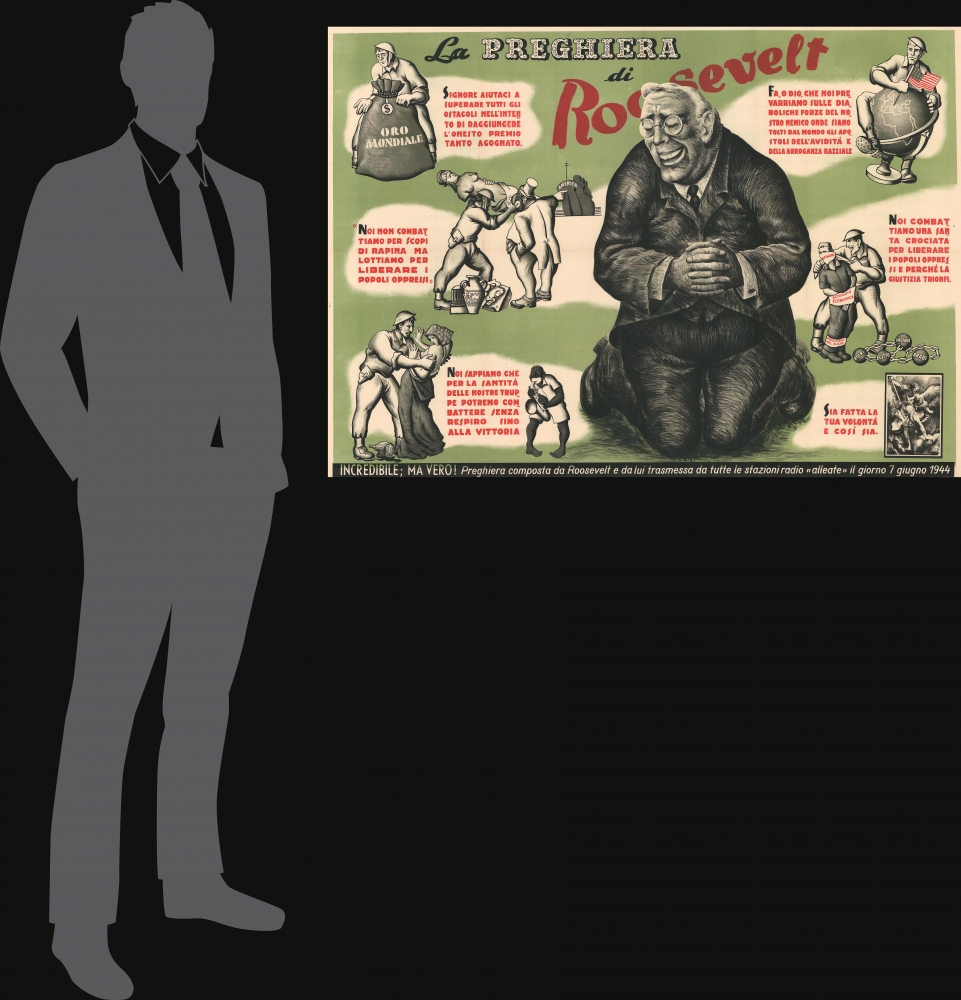 Printed in 1944 during World War II and shortly after the Allies seized Rome and the D-Day landings in Normandy, this anti-American anti-Roosevelt broadside was published by Italian fascists to expose what they considered to be American hypocrisy. It references American President Franklin D. Roosevelt's 'D-Day Prayer,' broadcast on June 6, 1944. The broadside centers on an imposing caricature of Roosevelt kneeling with hands folded and eyes closed, as if in prayer. To both his right and left, text bubbles appear, almost ephemerally as if in a dream, stating Roosevelt's wishes for the coming battles and, ultimately, final unconditional victory. Each phrase is accompanied by a vignette that does not illustrate Roosevelt's words, but what the Italian fascist creator of this broadside wants its viewers to understand from the words. Perhaps, the creator even references the reality of what the war had become, instead of Roosevelt's sanitized and propagandized pleas to Almighty God.

Roosevelt's Use of the Radio

Roosevelt famously employed the radio as a means of connecting with average Americans throughout his presidency. Begun in 1933, Roosevelt made thirty such broadcasts, known as 'Fireside Chats', which varied in length from fifteen minutes to over half an hour. Each broadcast discussed a different subject with the American people, most of which were recorded and are now part of the National Recording Registry of the Library of Congress. Roosevelt's last Fireside Chat took place on June 12, 1944, to mark the opening of the Fifth War Loan Drive. The broadcast on June 5, 1944, which proclaimed the Fall of Rome, was also a Fireside Chat.

On the evening of June 6, Roosevelt felt he needed to address the nation about the Normandy invasion. This invasion, codenamed Operation Overlord, came at a pivotal point in World War II and opened a second front in the European war, with Soviet Russia's Red Army fighting Hitler's Germany in the east. Roosevelt had not acknowledged the Normandy invasion the previous night in his discussion of events in Italy and addressed that silence at the beginning of his D-Day broadcast, stating

last night, when I spoke with you about the fall of Rome, I knew at that moment that troops of the United States and our allies were crossing the Channel in another and greater operation. It has come to pass with success thus far.

Then he asks the American people to join him in prayer. Roosevelt begins by calling the invasion a 'mighty endeavor' and states that it is 'a struggle to preserve our Republic, our religion, and our civilization, and to set free a suffering humanity.' As he continues, he evokes the imagery of the righteousness of the Allied cause against the enemy, whom he calls 'strong'. He states several times that the Allies will triumph, but that the victory will be hard won. Then he identifies the values for which the Allies believe to be fighting, and contrasts them with the ethos of the enemy,

At the end of his prayer, Roosevelt beseeches God to aid in achieving final victory,

With Thy blessing, we shall prevail over the unholy forces of our enemy. Help us to conquer the apostles of greed and racial arrogancies. Lead us to the saving of our country, and with our sister Nations into a world unity that will spell a sure peace a peace invulnerable to the schemings of unworthy men. And a peace that will let all of men live in freedom, reaping the just rewards of their honest toil.

Although this message was intended for the American people, it was immediately picked up and broadcast globally.

Roosevelt's Prayer and This Broadside

Around the central image of a nearly-beatific Roosevelt, five vignettes are used to illustrate five phrases that were purportedly part of Roosevelt's prayer that was broadcast by 'Allied' radio on June 7, 1944 in Italy. Beginning at the top left, Roosevelt is said to have referenced an 'honestly coveted prize', which, per the accompanying image, is not, in fact, world peace or even the end of the war, but the world's gold and other wealth.

The second phrase states, 'We do not fight for robbery purposes but we struggle to free the oppressed peoples' and is accompanied by an illustration of a soldier looting precious Italian antiquities to be sent to America who is directed by a caricature of a wealthy Jew.

The third phrase makes reference to the 'sanctity of our troops' and is contrasted with a depiction of a drunk and armed American soldier assaulting an Italian woman while a caricature of a black man plays a saxophone and watches.

The fourth phrase, in the upper right corner, beseeches God 'that we shall prevail over the diabolical forces of our enemy so that the apostles of greed and racial arrogance may be removed from the world' while an American soldier plants a large American flag in Italy while straddling an entire globe. This is a commentary on the incredible reach of the American armed forces, which at that point were fighting a war both in Europe and in the Pacific, an amount of territory covering a majority of the planet.

The fifth phrase uses one of the Allies favorite phrases, a 'holy crusade' to refer to the war, and states that Allied forces are fighting 'to free the oppressed peoples and for justice to triumph'. Here, the vignette features an American soldier binding a civilian prisoner with the phrases 'opinions', 'economic slavery', and 'imprisonment at sea'. We have been unable to trace the 'imprisonment at sea' claim (there were cases of Italian POWs captured by Germany that died at sea). Chains lay at the soldier's feet and are labeled 'Boers', 'Egypt', 'Indians', and 'Arabs', which reference European colonialism and the violent oppression synonymous with it.

Last but not least, the text box at the bottom, next to an image of an angel, closes the prayer with 'Let your will be done and so be it'.

By 1944, World War II was not going well for Italy. The era of war began for Italy a few years before Germany invaded Poland. The Second Italo-Ethiopian War began on October 3, 1935, and was, ironically in the context of this broadside, a colonial war fought by Fascist Italy against the Ethiopian Empire. Italy then held off joining World War II until June 1940, just weeks before France fell, so that Mussolini could claim part of the spoils from that defeat. Italy then participated in the campaigns in North Africa and the Balkans and sent troops to fight on the Eastern Front in Russia. On July 10, 1943, Allied troops invaded Sicily, bringing the war to Italy itself. In September, British troops landed on the 'toe' of Italy (September 3) and two Allied landings on September 9 at Salerno and Taranto brought Allied troops even closer to Rome. By then, Italian King Victor Emmanuel III had signed an armistice with the Allies, which forced the Germans to invade Italy to fight the invading Americans. Fighting continued on the Italian peninsula until May 1945.

This broadside was published anonymously in Italy in 1944. One example is cataloged in the OCLC, and we are aware of only one other instance when this poster has entered the private market, making it an extremely rare piece. Generally speaking, fascist material did not survive long after World War II, when it was subject to wide scale censorship and destruction.