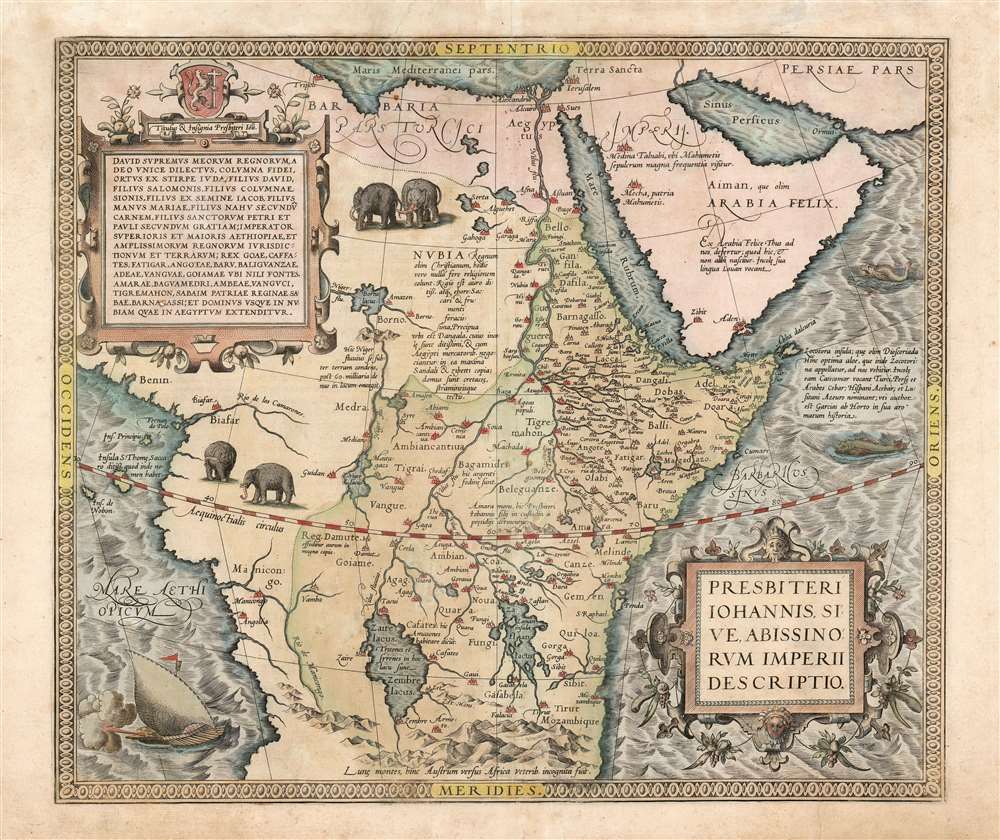 First State, First Latin Edition of one of the Most Desirable Africa Maps.

This is Ortelius' famous map of the Kingdom of Prester John, in its first Latin edition of 1573 and original color. The map covers from the Bight of Benin to the Indian Ocean and from Arabia and the Red Sea to Mozambique. It includes two decorative cartouches as well as stylized images of African elephants. While the African coast exhibits considerable advances over earlier maps of the region, the interior reveals a cartography primarily based on the literature of antiquity and little changed from the days of Ptolemy. Superimposed on these speculative lands is the legendary Kingdom of Prester John (Presbiteri Ioannis) - a persistent and popular figure in European myth. Cartographically the map is derived from Gastaldi's 1564 eight-sheet wall map of Africa.

The legend of Prester John dates to about 1145 when a Syrian priest name Hugh traveled to Europe to canvas for a fifth Crusade. Hugh described Prester John as a great Christian king whose empire was located somewhere in India - the idea being that the two great Christian empires, that of John and that of the Pope, would together make war on the Saracens occupying the Holy Land, thus sandwiching the enemy between their two indomitable armies.

About 20 years letter a curious letter began to circulate around Europe, purportedly by John himself, wherein the mythical King claimed to be some 562 years old and the ruler of the 'Three Indias'. 'India' at this time referred not just to the subcontinent, but also to much of southern Asia - and also Africa east of the Nile. It was divided into three parts, 'Farther India' or what is today India and Southeast Asia, 'Nearer India' or the modern-day Middle east, and 'Middle India' or the parts of Africa to the east of the Nile River. Having failed to pinpoint the Kingdom of Prester John in Asia, scholars as early as the 14th century began locating John's Kingdom in east Africa. Here they had a bit luck for explorers in the region, starting with the Francisco Alveres of Portugal in the 1500s, soon came into to contact with the Christian Solomonic Kings of Ethiopia or Abyssinia. The Coptic Ethiopian Emperor David II fit the mold of the 'Prester John,' and Alveres believed him to be a descendent of the legendary John, thus firmly entrenching the mythical kingdom Prester John on maps of east Africa well into the 18th century.

Descriptive Text on the Map

In the upper left corner, a strapwork cartouche is topped by a coat of arms, supposedly of Prester John. The text reads, in translation:

Honorary title of Prester John/King David is the highest of my Kings. [I, Presbyterius Ioannes], specially chosen by God, pillar of faith, born from the tribe of Judah, son of David, son of Salomo, son of the pillar of Zion, son from the seed of Jacob, son of the hand of Maria, son of Nahum's flesh, son of the holy Peter and Paul in mercy, emperor of upper and great Aethiopia, and of the legal grounds and countries of the most elevated kingdoms; king of Goa, Caffates, Fatigar, Angota, Baru, Balinguanza, Adea, Vangua, Goiama where the Nile has its sources, of Amara, Banguamedrum, Ambea, Vangucum, Tigremahon, of Saba, homeland of the Queen of Saba, of Barnagassum and Lord of all of Namibia, extending all the way to Egypt.

In Nubia, or Southern Egypt and northern Sudan, another note reads:

Nubia was once a Christian kingdom, but now they do not apply themselves to religion at all. The region is very rich in gold and ivory, and yields sugar and fruits in great abundance. Its main city is Dangala, whose inhabitants are very wealthy, and they trade with Egyptian merchants. Here they make many shoes and bags. Their houses are covered with chalk and straw.

On the east coast, a small island Socotra, merits its own note,

The isle of Zocotra, once called Dioscoriada. From here they export to us excellent aloe, which for this reason is called Zocotorina. The inhabitants call it Catecomar, the Turks, Persians and Arabs call it Cebar, the Spanish Acebar, and the Portuguese call it Azeure, according to Garcias ab Horto in his History of Spices.

Other notes describe the Arabian Peninsula and the Niger.

The map follows the Ptolemaic model with regard to the course of the White Nile and its source in two great lakes – the Zaire Lacus (Zembre Lacus) and the Zaflan Lacus, themselves in the foothills of the Mountains of the Moon or Lunae Montes, located at the base of the map. The Blue Nile, which has its source is modern day Ethiopia, is expressed as a complex network of rivers and valleys bearing little resemblance to reality – though the observer will note that many of the place names, Amara, Tigre, Dobas, and Dangali, do reflect real places and remain in use today.

Ortelius first issued this map in 1571. There are two states, this being the first, identifiable by the hachuring around Africa being extended from 3 to 6 mm and the presence of curvilinear hachures in the border. It was published until about 1641 in various editions of the Theatrum Orbis Terrarum. The present map was issued in the 1573 Latin edition of the Theatrum, the first to be printed in that language, of which just 80 were printed. The map appears on the market in various editions and in wildly varying condition; it is well represented in institutional collections.

Ortelius A., Theatrum Orbis Terrarum, (Antwerp), Latin Edition, 1573.     Abraham Ortelius' magnum opus, Theatrum Orbis Terrarum, was the world's first regularly produced atlas, which 'set the standards for later atlases . . . It was the first undertaking of its kind to reduce the best available maps to an uniform format.' (Koeman) A modestly-sized work of fifty-three maps in its first edition of May 1570, it was an immediate success: there were three further editions that year, and the work remained in print for a total of 32 editions, the last of which was 1641, well after its author's 1598 death. Ortelius added to his atlas constantly, and by 1595 the Theatrum contained 147 maps. Ortelius is renowned generally as an editor, and indeed much of the Theatrum is compiled from a variety of sources: in such cases, Ortelius was scrupulous in naming his sources. But Ortelius was also a mapmaker in his own right: many of his maps are a distillation of various sources into his own work, and there were many maps - particularly in his atlas of Biblical and ancient history Parergon - which were entirely Ortelius' work. In his role as an editor, Ortelius followed in the footsteps of Munster, whose Cosmographia was, until Ortelius, the best window on the world for the curious European reader. In terms of the artistry of his maps, Ortelius oversaw the first great flourishing of copperplate engraving in the service of cartography to occur in Northern Europe. Ortelius' work provided the model for the atlases of Mercator, Hondius, Blaeu and all their progeny in the 17th century - many of whom were to produce faithful editions of Ortelius' maps in their own productions.