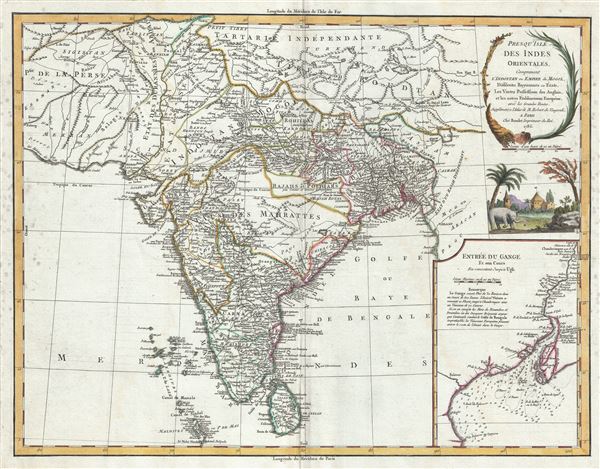 Originally drawn in 1749, our map predates the definitive Alexander Dalrymple mapping of India in the 1770s and so is quite vague in a number of areas - especially those controlled the independent Maratha Confederacy southwest of Bihar. In this area there are several speculative rivers as well as large lake, labeled Chilea or Ganga. This is most likely an erroneous mapping of Chilka Lake (Chilika Lake). Chilka Lake is the second largest salt water lagoon in the world - but was clearly missed by early mapmakers working on the Orissa coast.
,br>In Assam, Vaugondy maps the 'supposed' locations of the apocryphal Lake of Chiamay. Early cartographers speculated that such a lake must exist as the source of four important Southeast Asian river systems including the Irrawaddy, the Dharla, the Chao Phraya, and the Brahmaputra. This lake began to appear in maps of this region as early as the 16th century and persisted well into the late 18th century. Its origins are unknown but may originate in a lost 16th century geography prepared by the Portuguese scholar Jao de Barros. It was also heavily discussed in the journals of Sven Hedin, who believed it to be associated with Indian mythology that a sacred lake linked several holy river systems. There are even records that the King of Siam led an invasionary force to take control of the lake in the 16th century. Nonetheless, the theory of Lake Chimmay was ultimately disproved and it disappeared from maps entirely by the 1780s.