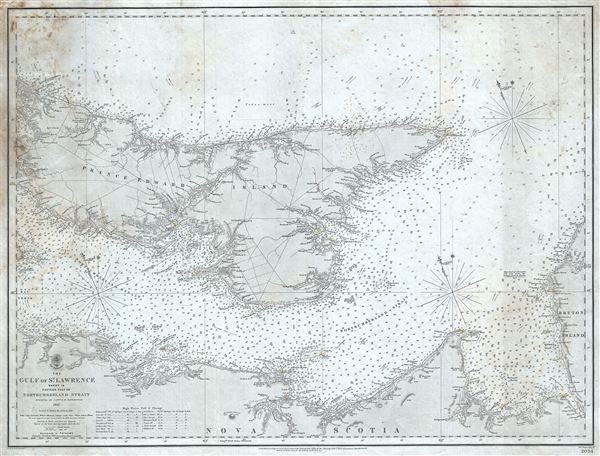 This is a scarce 1864 British Admiralty Hydrographic Office maritime map or nautical chart of Prince Edward Island and vicinity. Centered on Prince Edward Island, Canada's smallest maritime province, it covers the eastern part of the Island as well as the Gulf of St. Lawrence, the eastern part of the Northumberland Strait and the northern portion of Nova Scotia. The chart features both nautical and inland details noting topographical features and thousands of depth soundings (in fathoms). Important ports, rivers, reefs, light houses, and navigational points are carefully noted. This map, based on the survey work conducted by Captain H. W. Bayfield F. A. S., was first issued in 1851, with corrections up to December 1864.

Although Prince Edward Island did not enter the Canadian Confederation until 1873, it is known as the 'Birthplace of Confederation.' The Charlottetown Conference, which took place in September 1864, just three months before this chart was issued, was the first meeting in the process of establishing the British North America Confederation or the Dominion of Canada. Charlottetown is identified on this chart.

The map is engraved by J. and C. Walker and published according to Act of Parliament at the Hydrographic Office of the Admiralty, and sold by J. D. Potter, Agent for the Admiralty Charts. The verso of the chart includes a label for a subsequent seller, A. and H. Creichton, Stationers, dealers in charts, navigation books, etc.

Very good. Overall toning. Some spotting near left margin.
Looking for a high-resolution scan of this?