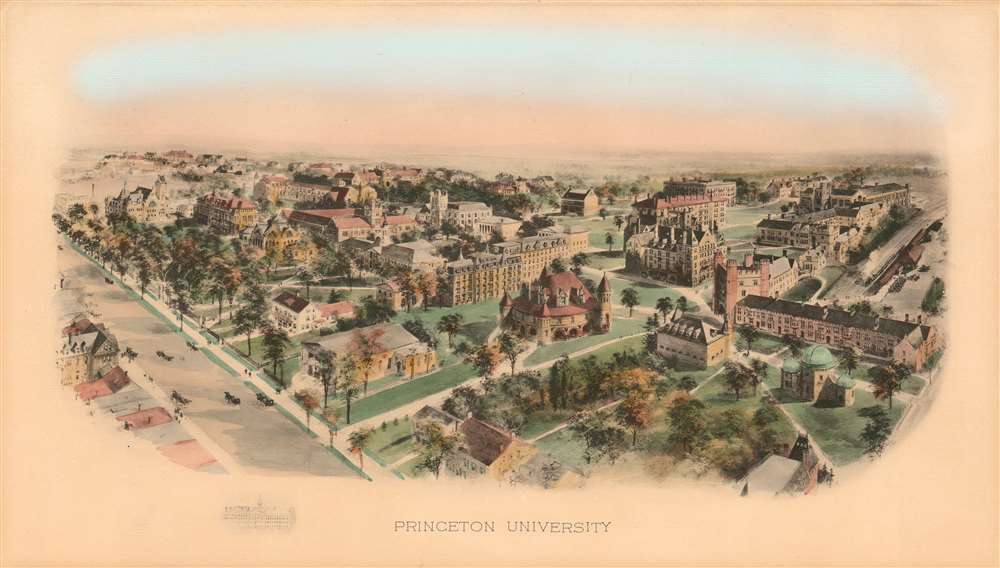 A rare c. 1906/7 photogravure small-format editon of Richard Rummell's bird's-eye view of Yale University. The view is oriented to the east with Richardson Auditorium prominent at center. To the right, the iconic fortress-like Blair Hall clock tower is visble. At the far right is the old Halstead Observatory, site of today's Joline Hall. Nassau streets runs at a diagonal through the foreground.

Rummell (1848-1924) was an American landscape artist known for his drawings of American universities. At the turn of the century, Littig and Company commissioned Rummell to prepare watercolors of some of the nation's most prestigious colleges. From these watercolors, copper-plates were engraved and a limited number of engravings were issued. Most of Rummell's university views are strikingly similar in style, reveling the entire campus in panoramic splendor. The views are uniformly issued from an altitude of about 300 feet, suggesting that Rummell most likely worked form a balloon. Rummell produced his views in a variety of formats; the smaller ones (such as this example) are scarce on the market. Ironically, Rummell's Princeton view appears to not be held in institutional collections.