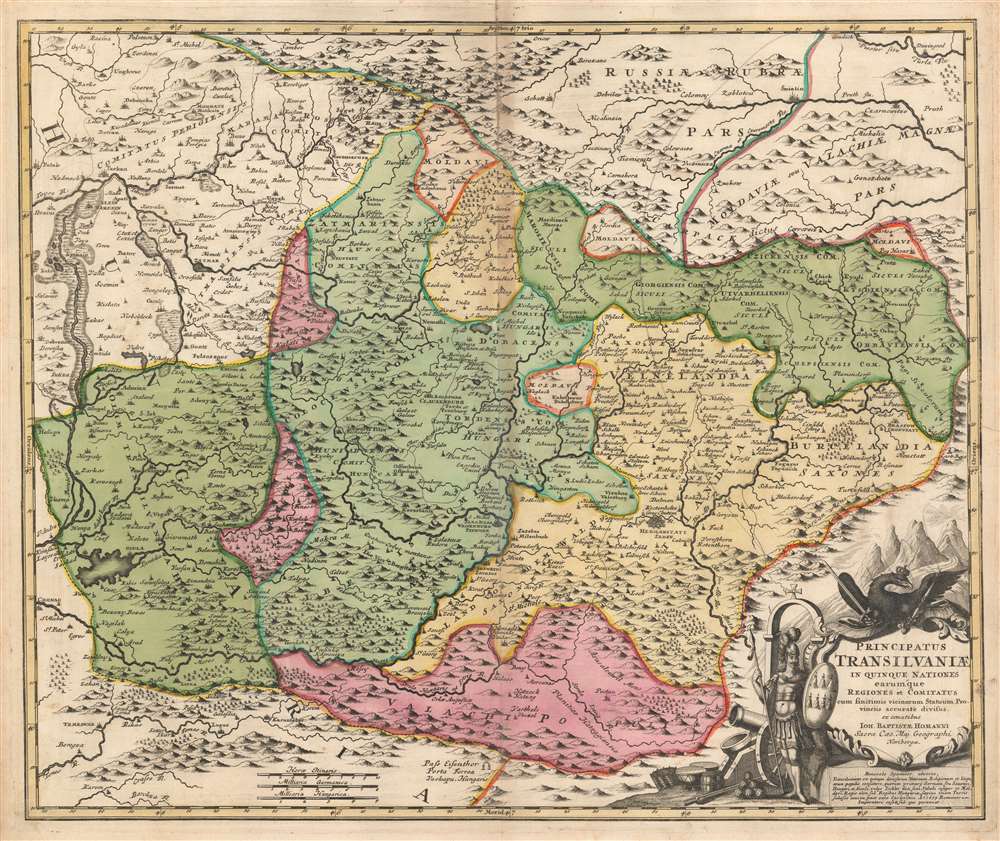 This is a beautiful original color example of Johann Baptist Homann's 1716 map Transylvania, covering what is today the northern part of Romania - from the Bereton River eastward as far as Castle Boza. The map is superbly engraved and detailed, noting villages, cities, forests, rivers, monasteries, castles, and lakes. Topography is indicated pictorially.

A Martial Cartouche, a Warlike Past

The map is embellished with a superbly engraved cartouche containing elements of the Transylvanian coat of arms; the whole of the cartouche is surmounted by a fierce, crowned eagle bearing a scepter and a sword. Standing beside the cartouche is an armed warrior, with a shield bearing the \ symbols of seven cities atop mountains - an allusion to Transylvania being known as the 'Country of Seven Cities'. (despite this history, the map shows only one primary city in the region, Hermannstadt.) Strewn about the warriors feet are cannon, cannonballs, war drums and other such armaments. Below the cartouche, a Latin text describes Transylvania thus:

Transilvania consists of five peoples of different nationalities, religions and languages, of whom the first Germans, or Saxons, Hungarians, and Sicilians (commonly called Zeckler), and also Valachi and Moldavi. A country formerly under the Hungarian king... they had been compelled to submit to the Turks; in 1699 they gave way to the Emperor of the Romans, under whom it lasts

This map was engraved as early as 1705 for inclusion in Homann's atlases, including the Grosser Atlas. This example corresponds to 1716 editions of Homann's Atlas Novus Terrarum Orbis Imperia Regna.