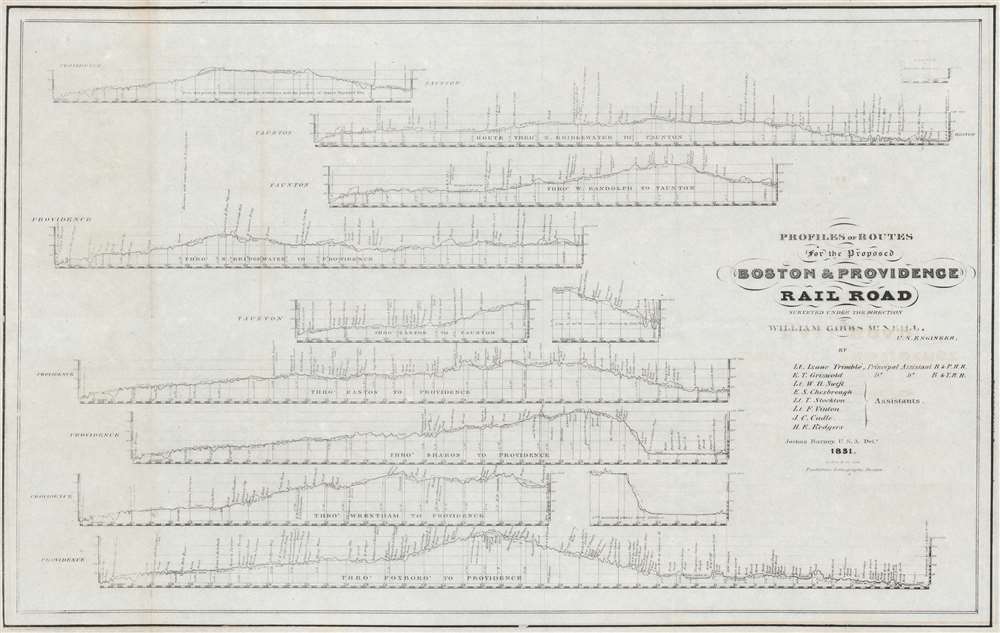 Profile illustrations of potential routes for one of the earliest American railroads.
$1,000.00

This is an extremely rare 1831 Joshua Barney map of the route profiles for the proposed Boston and Providence Railroad, one of the earliest railroads incorporated in the United States. Nine different profiles are presented, each illustrating a different portion of one of the proposed routes for the Boston and Providence. Published to accompany a report prepared by Engineer William Gibbs McNeill for the Board of Directors and shareholders of the railroad, each profile traces one or part of the proposed routes, marking important waypoints and areas of difficulty along the way. Elevation and gradient are tracked and the mileage along the route is noted. Many of the profiles end at Providence, while others end at Taunton, a town approximately halfway between Boston and Providence. It is unclear as to why two of the profiles exhibit gaps

This chart was drawn by Joshua Barney, engraved by Jason Eddy, and printed by Pendleton's Lithography for publication with William Gibbs McNeill's report submitted to the shareholders of the Boston and Providence Railroad entitled Report of the Board of Directors to the stockholders of the Boston and Providence Rail-Road Company. This piece is extremely rare on the private market, both separately and as a part of the Report. We are aware of no other occurrences of either the chart by itself or accompanied by the report entering the private market, however the report is well represented in institutional collections.

Joshua Barney (1799 or 1800 - 1867) was an American engineer known for creating maps of early American railroads. He created work for the Boston and Providence Railroad and the Baltimore and Ohio Railroad, as well as surveyed routes for other railroads, including ones from Andover to Haverhill, Lowell to Nashua, and Newburyport Bridge to the State Line. Learn More...


William Gibbs McNeill (October 3, 1801 - February 16, 1853) was an American engineer and surveyor. Born in Wilmington, North Carolina, McNeill was educated in Newtown, Long Island, New York and was on track to attend Seminary school. However, he was taken by his friend General Joseph G. Swift, then Chief Engineer of the Army to West Point as a boy, and he soon expressed a desire to leave the life of the cloth and attend the Military Academy. He soon gained an appointment to West Point and entered the United States Military Academy at West Point on July 26, 1814. McNeill graduated from West Point on July 17, 1817 and was assigned to the Corps of Artillery, where he soon gained a position as a topographical engineer. McNeill rose through the ranks and quickly found himself with the rank of Brevet Captain and assigned as an Assistant Topographical Engineer to the General Staff of Artillery. He was assigned to conduct surveys for the Chesapeake and Ohio Canal, the James River and Kanawha Canal, and the Baltimore and Ohio Railroad. McNeill gained such a high professional reputation that until his resignation from the army on November 23, 1837, he acted as superintendent on numerous railroad projects, including the Paterson and Hudson River, the Boston and Providence, the Providence and Stonington, and the Taunton and New Bedford. After resigning from the army, McNeill held several positions, including President of the Chesapeake and Ohio Canal from 1843 - 1843. When the 'Dorr Rebellion' broke out in Rhode Island in 1842, McNeill was selected as leader of the 'law and order party' and commissioned as a Major General in the States Militia. McNeill successfully put down the rebellion without any bloodshed and Dorr was arrested, convicted of treason, and sentence to life in prison, gaining his release five years later. Following this episode, President Tyler selected McNeill as Chief Engineer of the Dry Docks at Brooklyn Navy Yard in 1844. The following year, President Polk removed McNeill from this post to satisfy the 'Dorr Democrats', but McNeill had already planned the docks and construction was already underway by the time he was forced out. Learn More...