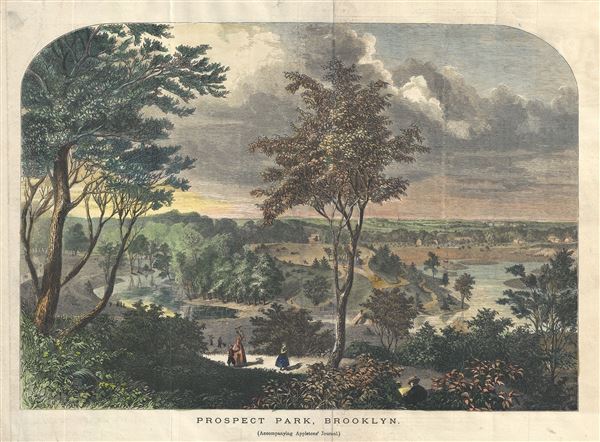 This is a beautiful 1870 view of Prospect Park, Brooklyn, issued by D. Appleton. Drawn while the park was still under construction, it reveals Prospect Park as conceived by the landscape architects, and indeed 'Artists,' Vaux and Olmsted. Vaux and Olmsted were awarded the task of designing Prospect Park in 1866 by the Brooklyn Common Council. Olmsted's vision drove the overall design while Vaux concentrated his attentions on bridges, buildings, and other structures within the park. The creation of Prospect Park, which was to consist of some 585 acres of public forest, pathways, promenades, lakes, bridges, and meadows, was a seminal moment in civic urban design. As with their most famous work, Central Park, Vaux and Olmsted were meticulous in their design of Prospect Park, with every tree, pond, and bench planned. Olmsted wrote: 'Every foot of the parks surface, every tree and bush, as well as every arch, roadway, and walk and been placed where it is for a purpose.' Though Olmsted is best known for his work in New York's Central Park, there are many who consider Prospect Park, his second masterpiece, to be his finest. Today, because of Vaux and Olmsted's efforts, Brooklynites have the privilege of enjoying what is, without question, one of the finest examples of a planned urban public recreation area in the world.

A note accompanying the view in Appletons' Journal read

This park possesses rare natural advantages; it is located on the hills in the rear of the city, between two and three miles from Fulton Ferry, and embraces within its limits hills, ravines, brooks, and, more than all, clusters of forest-trees of many of the hardiest and most beautiful varieties to be found on the continent. The views from all portions of the park are charming, but the most comprehensive is that from the 'Lookout,' near the eastern entrance. From this point, on a clear day, one can take in at a glance the coast from Far Rockaway to Sandy Hook, with the Atlantic as a background; the Bay and the Hudson, from Jersey Heights to the northerly terminus of the Palisades, and the cities of New York, Brooklyn, and Jersey City, with all the islands in the Bay, East River, and Sound.

The lake, a portion of which is shown in our illustration, now has a water surface of fifteen acres, but when completed it will contain about fifty acres, and will be abundantly supplied with pleasure-boats of all kinds. When we say that the park is over half finished, we mean to say that over one-half of the labor necessary has been completed; but this labor has much, in fact most of it, been of a character which does not show its results to the casual visitor, the purely ornamental being still almost untouched, and of a character which it will probably take two years to develop.

The park, although opened to the public in 1867, would continue to be under construction until 1873.

D. Appleton (fl. 1830 - 1873) was a New York based map publisher operating in the middle part of the 19th century. His most common publications were school geography texts published under his own name or the name of his associate S. S. Cornell. He also published a series of pocket maps relating to the Civil War and a few lesser known wall maps. Learn More...