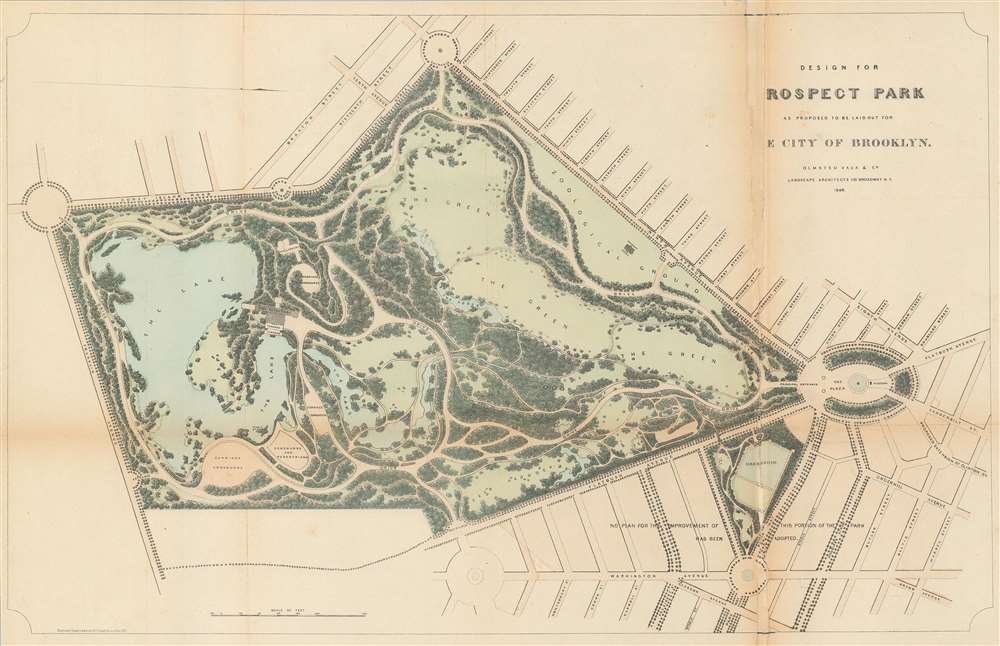 A rare 1868 first edition of Vaux and Olmsted's map of Prospect Park, Brooklyn. Issued just months after its October 1867 completion, this is one of the first published maps to depict the design of Prospect Park. The map depicts the park as a whole and includes pathways, lakes, buildings, individual trees, rocks, and elevation measurements. The streets and avenues surrounding the park are also noted.

This extraordinary map reveals Prospect Park as conceived by the landscape architects, and indeed 'artists,' Vaux and Olmsted. Vaux and Olmsted were awarded the task of designing Prospect Park in 1866 by the Brooklyn Common Council. Olmsted's vision drove the overall design while Vaux concentrated his attentions on bridges, buildings, and other structures within the park. The creation of Prospect Park, which was to consist of some 585 acres of public forest, pathways, promenades, lakes, bridges, and meadows, was a seminal moment in civic urban design. The park itself was designed as a whole with every tree, pond, and bench meticulously planned. Olmsted wrote: 'Every foot of the parks surface, every tree and bush, as well as every arch, roadway, and walk and been placed where it is for a purpose.' Though Olmsted is best known for his work in New York's Central Park, he considered Prospect Park, his second park, to be his finest. Today, because of Vaux and Olmsted's efforts, Brooklynites have the privilege of enjoying what is, without question, one of the finest examples of a planned urban public recreation area in the world.

This map was published for Vaux and Olmsted's report. It was lithographed by Hayward, States and Kotch of 171 Pearl Street. Examples are scarce.

Bulletin of the New York Public Library, Vol 6, 1901, Page 86 (references both this and the 1870 revision).
Looking for a high-resolution scan of this?