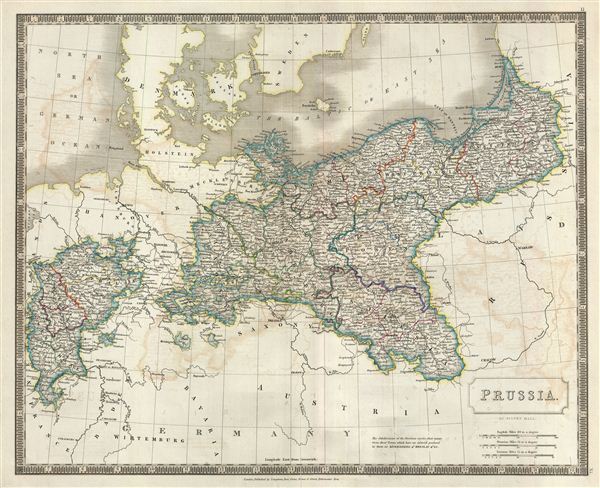 This is a beautiful map of Prussia from Sidney Hall's extremely scarce 1835 New General Atlas. Covering parts of the modern day nations of Poland, Lithuania and Germany, Prussia stretches across the map from Lower Rhine moving eastward, including Brandenburg and Saxony, to East Prussia. Hall notes towns, rivers, mountains, railroads, and various other important topographical details. Elevation throughout is rendered by hachure and political and territorial boundaries are outlined in color. The map also identifies several battlegrounds, including the Battle of Jena-Auerstedt in 1806, the Battle of Dresden in 1813 and the Battle of Minden in 1759. Prussia attained its greatest importance in the 18th and 19th centuries when it dominated northern Germany politically, economically, and in population. The German Confederation, created in 1814, acted as a buffer zone between Austria and Prussia, its two largest and most powerful member states. Nonetheless the rivalry between the two powerful states increased until the break out of the Austro-Prussian War. Prussia won the Austro-Prussian War in 1866 which ultimately led to the collapse of the German Confederation. A few years later, in 1871, most of the former Confederation states were folded into the newly proclaimed German Empire.