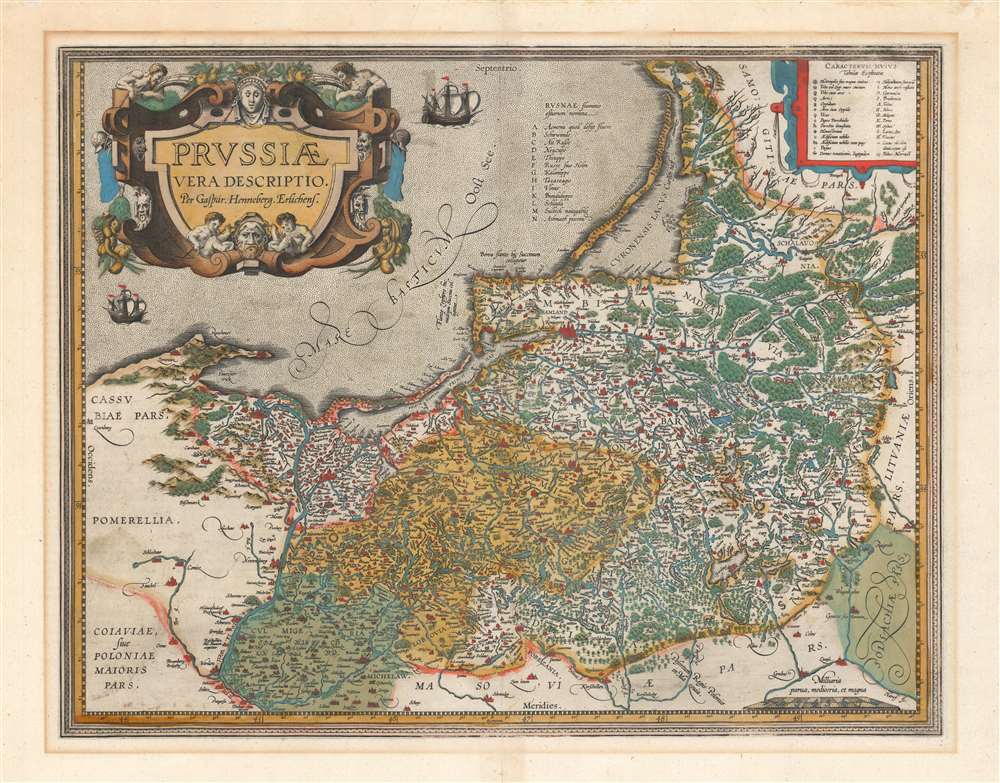 Ortelius' corrected version of the first detailed map of Prussia.
$950.00

A beautiful, original-color first atlas edition of Ortelius' third map of Prussia, added to the Theatrum Orbis Terrarum in 1595. It depicts the region now comprised of northern Poland (as far south as Toruń on the Vistula River), the Russian province of Kaliningrad, and western Lithuania. Detail spans from just west of Gdansk to Augustów in the east. The northeast limits of the map are marked with the region of Samogitia, and the Lithuanian coastal town of Palanga.

Many of the maps included in early editions of the Ortelius atlas shared a sheet with other maps. For example, his 1570 map of Prussia, occupied only half of a sheet, which it shared with his map of Ditmarschen. It did not require more: its source, Heinrich Zell's 1542 work, was the first printed map of Prussia but its detail was scant in comparison to the 1576 map of Prussia by Caspar Henneberger (1529 - 1600), the source for Ortelius' 1584 full-sheet map. In 1595, Ortelius produced the present map. It contains aesthetic changes, but also amends lacunae in the place names of the 1584 and corrects several typographical errors. It is likely that Hennenberger's support from the Dukes of Prussia, in addition to his map's superior detail, brought the map to Ortelius' attention.

This map was engraved for inclusion in the 1595 Latin edition of Ortelius' Theatrum Orbis Terrarum. The present example conforms typographically to that edition. A dozen examples are listed in OCLC, of various editions. This first Latin edition is cataloged in only four institutional collections.


Caspar Hennenberger (1529 – February 29, 1600) was a German Lutheran pastor, historian and cartographer. He was born in Erlich, in Thüringen; he started his studies in Lutheran divinity at the University of Königsberg in 1550, and he would work for nearly thirty years as a Lutheran Pastor. His scholarship apparently reached beyond divinity, however: with the support of his patron Duke Albert of Prussia, and the aid of Prussian mathematician Nicolaus Neodomus, Hennenberger would produce, and in 1576 publish, the first detailed map of Prussia. He accompanied that work with several books amplifying on the map. Hennenberger's map would be well received: Abraham Ortelius would adopt Hennenberger's map as a model, replacing the outdated map derived from Heinrich Zell's 1542 work. Learn More...