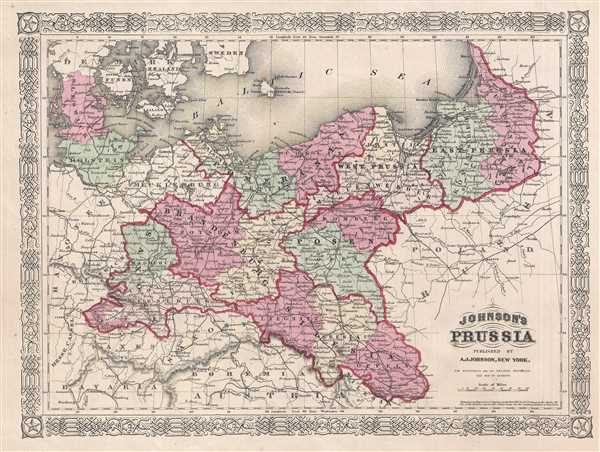 One year before the creation of Bismark's North German Confederation.

This is an 1866 A.J. Johnson map of Prussia, Germany. The map depicts Prussia from Hanover and Brunswick to Poland and from the Baltic Sea to the Czech Republic (Bohemia / Austria), Bavaria, and Saxony. Regions and provinces within Prussia are labeled, with provinces shaded different colors or easy differentiation. Numerous cities and towns are labeled both inside and outside Prussia, including Berlin, Konigsberg, Warsaw, Breslau, Dresden, Prague, Weimar, and Bremen. Roads, railroads, rivers, and lakes are also illustrated.

Prussia attained its greatest importance in the 18th and 19th centuries when it dominated northern Germany politically, economically, and in population. During the 19th century, Chancellor Otto von Bismarck pursued a policy of uniting the German principalities into a 'Lesser Germany' which would exclude the Austrian Empire. Bismarck's North German Confederation formed in 1867, one year after this map was issued. Subsequent Johnson atlases removed the specific Prussia map in favor of larger map incorporating then entire German Confederation. The whole is surrounded by the fretwork style border common to Johnson's atlas maps issued between 1863 and 1869.

Steel plate engraving prepared by A. J. Johnson for publication in the 1866 edition of his Johnson's New Illustrated Family Atlas.