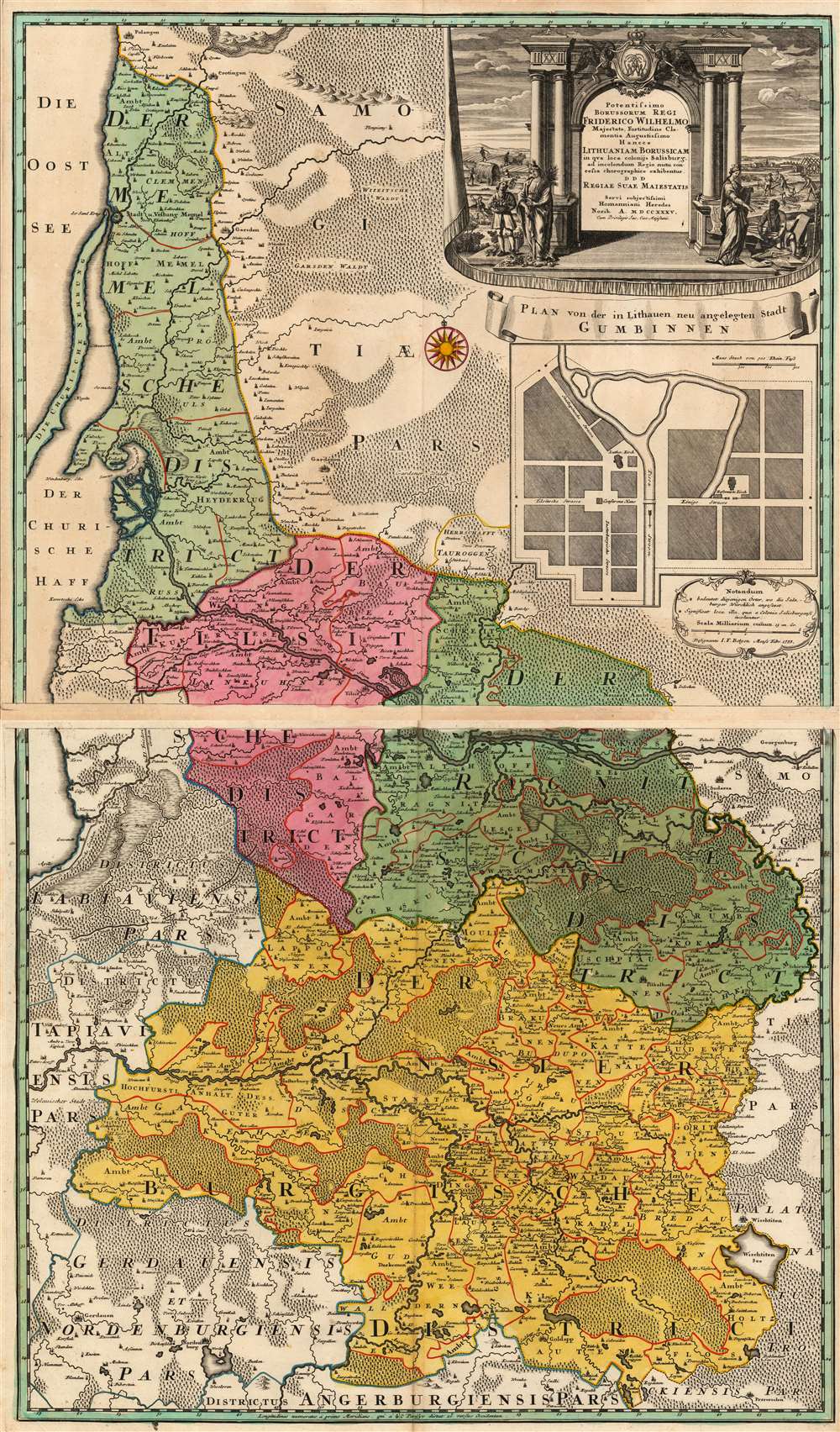 Resettlement of a Plague Region, Plagued by War and also Plague.
$1,750.00

This is a stunning example of the 1735 Homann Heirs map of Lithuania Minor, then the easternmost province of Prussia. The region covered by this grand, two-sheet map is now occupied by Russia's Kaliningrad Oblast (the southern sheet) and the western portion of Lithuania, reaching as far east as modern-day Vištytis and Kudirkos Naumiestis, (Neustadt). The map's detail is rich for the region within the bounds of the Kingdom of Prussia. Across the border into Lithuania, the detail gives way to seemingly endless and trackless forest.

The provinces covered in the present map were an active theatre of the Great Northern War between 1708 to 1712. As a direct result, the region was subject to the plague, already afflicting an area spanning from Central Asia to the Mediterranean. The depopulation of East Prussia led King Frederick William I to actively resettle the area with Protestant refugees from Salzburg (who had been expelled by the Catholic Prince-Archbishop Count Leopold Anton von Firmian).

Beneath the ornate cartouche is a tidy town plan of Gumbinnen, now Gusev in the Kaliningrad Oblast. The town first appears well prior to this map, in the sixteenth century. It would have a long history of Protestant settlement, but with the influx of new settlers from Salzburg the town was given a new, modern plan. But the Salzburgers did not only settle there: the map marks, by means of asterisks, other locations where such colonists could be found: primarily in the Ragnitsche and Insterburgische districts, south of the River Neman (northern border of the Kaliningrad Oblast).

The map is dedicated to King Frederick William I, at whose behest the mapped region was resettled. The dedication is framed with a classical colonnade and flanked by scenes of industrious farmers and builders - the former overseen by Ceres, the goddess of the harvest, and the latter by an Italia Turrita symbolic specifically of the cities of Italy, and more generally of European civic achievement.

A Long History as a Border Region

At the eastern limits of the map, straddling the Šešupė River, can be found the two towns of Schirwindt and Neustadt (now known as Kudirkos Naumiestis.) Scrutinizing a modern map - and indeed, the actual ground - one will not find Schirwindt, which had the misfortune of being one of the first points struck by the Soviet Union in their counterattack of Nazi Germany, October 1944. The city was obliterated in the attack, and it was not rebuilt.

This map was engraved by the firm of Homann Heirs in 1735 both for inclusion in their atlases and as a separate issue. Some can be found in composite atlases of the period as well. We see forty-six examples cataloged in institutional collections.


Johann-Friedrich Betgen (1721? - 1738) was a surveyor and mapmaker, whose name survives in connection with a single work: the Homann Heirs map of Lithuania Minor. If the dates for Betgen are correct, his 1733 contribution to that map was done at the tender age of twelve. It seems likely that his role was circumscribed to the plan of Gusev which appeared on the broader map: a work so professional and detailed that to credit it to a child beggars the imagination. Nothing is known of Betgen's life and training, although his family name suggests a Dutch background. Learn More...

Excellent. Two sheets (size given is for the two sheets if joined.) Slight toning at extremity of margins, else fine with rich original color and a superb strike.