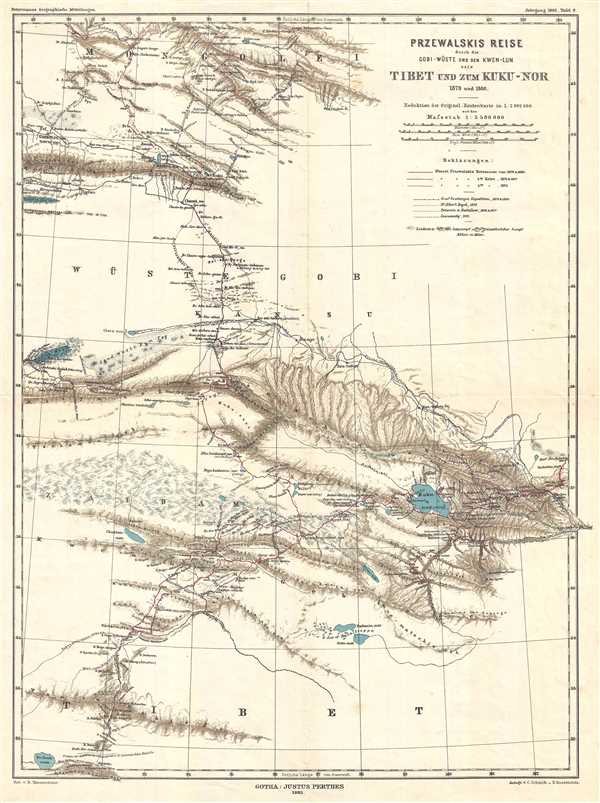 German map depicting the journeys of Nikolai Przewalski, and Qinghai Lake, the largest lake in China.

This is an 1883 German map which was published in Petermanns Geographische Mitteilungen. The map depicts the journeys of Russian explorer Nikolay Mikhaylovich Przhevalsky from Mongolia into northern Tibet and parts of western China. Three different routes taken by Przewalski are illustrated on the map, as well as routes taken by four other expeditions between 1875 and 1880. Each of these expeditions traversed the Gobi Desert, which divides the map in two. Several different mountain ranges are depicted on the map, as well as lakes, rivers, salt marshes, deserts, and swamps. Qinghai Lake, the largest lake in China, is depicted on the map and labeled as 'Kuku-nor.' Lop Nur (Lob-Nor), a now largely dried-up salt lake in China, is illustrated along the left border. The map's title, translated into English, is 'Przewalski's journey through the Gobi Desert and the Kwen Lun to Tibet and the Kuku-Nor.'

Published for Petermanns Geographische Mitteilungen in Gotha in 1883.