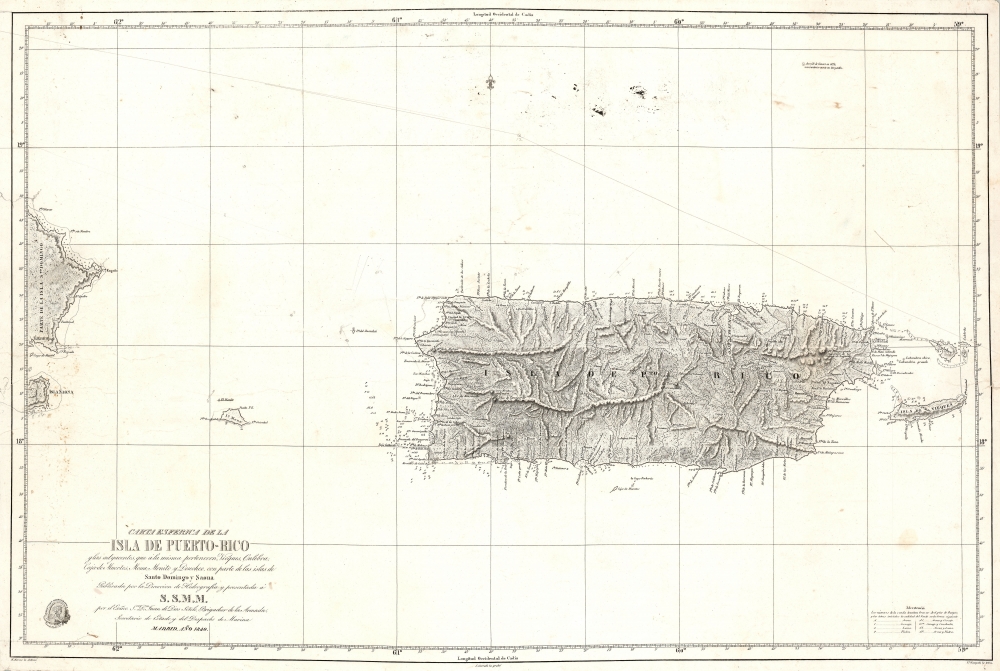 A stunning nautical chart or maritime map of Puerto Rico (Porto Rico) by Miguel Moreno of the Spanish Depósito Hidrográfico, here it its 1840 first edition. The map's coverage extends from western Santo Domingo (Dominican Republic) to the islands of Vieques and Culebra, east of Puerto Rico. In addition to coastal detail, the map also offers an exceptional presentation of the island's inland topography. Predates the 1843 construction of Puerto Rico's first lighthouse at El Moro.

This map was published by the Depósito Hidrográfico in 1840. It was drawn by Miguel Moreno, who was a pilot and draftsman on the Cosme Damián Churruca expedition to South America and the West Indies (1792 - 1795) - during which the basic reconnaissance for this map was possibly completed. It was engraved by Depósito Hidrográfico engrave Juan Carrafa, with the lettering completed by Nicolás de Gangoiti. We are aware of subsequent updated and revised editions in 1848, 1854 and 1897. The present example is the 1840 first edition.

This map appears on the market from time to time in latter editions, but we are unaware of another example of the first edition to have been sold. The OCLC identifies only one first edition, at the Biblioteca Nacional de España.


Juan Carrafa (1787 - June 19, 1869) was a Spanish cartographer and engraver active with the Depósito Hidrográfico in Madrid during the first half of the 19th century. He work primarily consists of nautical charts.


Nicolás de Gangoiti (September 30, 1801 - January 6, 1857) was a Spanish artist and engraver active in Madrid during the early 19th century. Gangoiti was born in Madrid, the son of the Spanish artist, line and letter engraver Pedro Manuel de Gangoiti. Nicolás probably mastered letter engraving under his father's tutelage, and later studied under the painter Vincente López. Although he wanted to pursue a career as a painter, his father's declining health and advanced age, forced him to take up the more lucrative engraving profession. He worked extensively as a letter engraver for the Depósito Hidrográfico. He was the older brother of Juan Gangoiti (July 12, 1816 - February 8, 1878), also an artist and engraver.