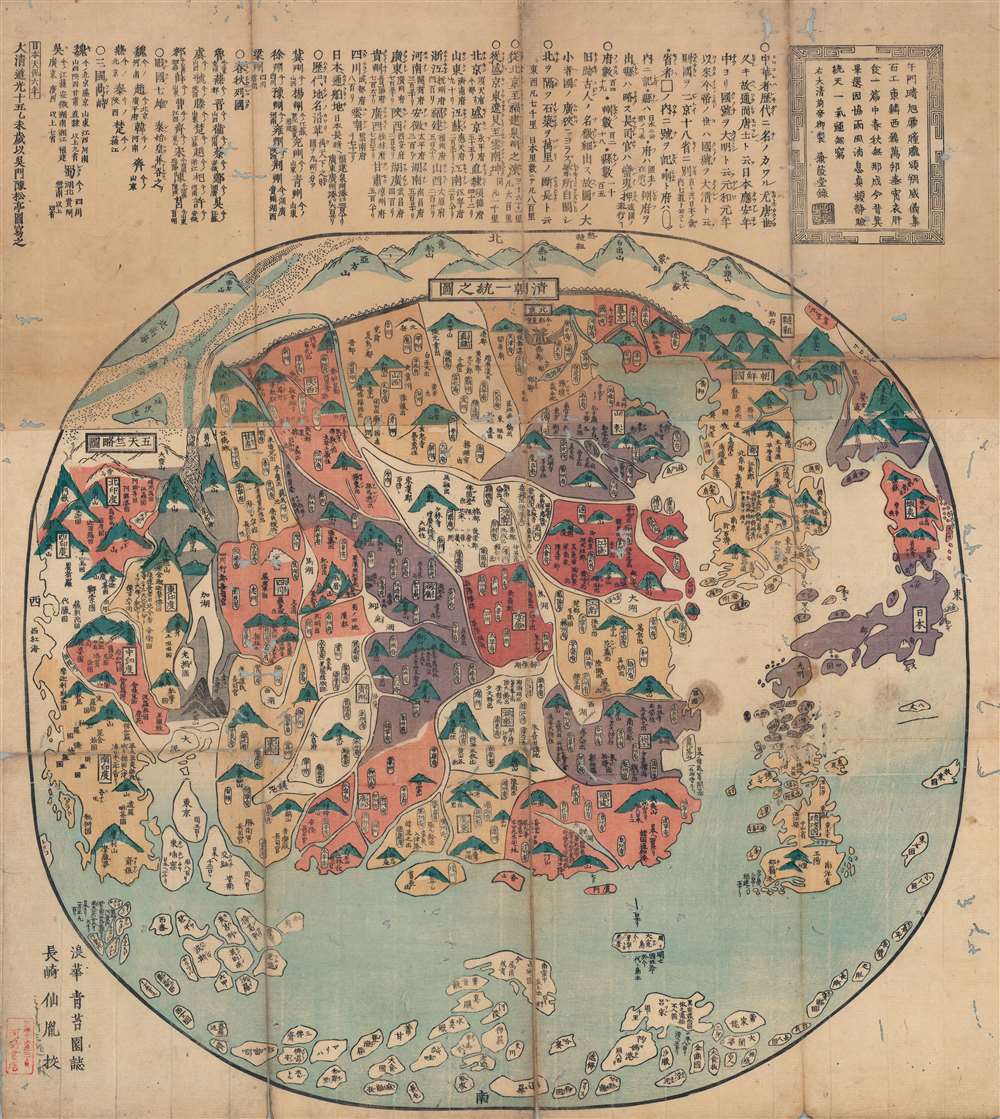 This is an 1835 Japanese xylographic map of the Qing Empire and much of Asia - a curiosity issued in Japan despite the isolationist Tokugawa policies. It is further notable for recognizing and praising the Manchu-led Qing Dynasty, whereas many Japanese maps of the era ignored or even denigrated the Manchus. Yet it retains common elements of Tokugawa-era maps of China, such as historical and religious (Buddhist) references as well as cartographic anachronisms, rooted in Japan's admiration for and fascination with ancient Chinese culture.

Ostensibly a map of China under the Qing Dynasty, this map in fact ranges from India to Japan, inclusive of all of China, Korea, and Southeast Asia, reflecting a pan-Buddhist perspective. The Western portion of the map is labelled ‘Sketch Map of the Five Regions of India' (五天竺略圖), a reference to ancient Indian and early Buddhist ones texts. The names of historical kingdoms such as Magadha (魔伽陀) are listed throughout. The travels and activities of early Japanese monks brought Buddism from China are also mentioned. For instance, off the coast of Zhejiang is Putuoshan (here as 普陀洛山), with a note pointing out that the Zen monk Egaku (惠萼) developed the island as a Buddhist pilgrimage site dedicated to Avalokitasvara (Ch. 觀音 Guanyin, J. Kannon).

The description above the map acts as a sort of legend, noting the 18 provinces (with Japanese kana written next to them) and 149 prefectures (府) of China along with administration of 'barbarian' (蠻夷) areas under the Qing. Provinces and prefectures are denoted with squares and ovals, respectively (the legend indicates the Japanese equivalents – 道, 郡). The text explains that the Great Wall (prominently displayed) stretches over 7,000 ri (里) and that by comparison Japan is only 800 ri across. It also lists the distance between various points: from Beijing to Quanzhou, from Shenyang (盛京) to Yunnan, from Beijing to each of the provincial capitals, and from Nagasaki to Quanzhou and Guangzhou. Finally, it lists the current names of the historical 'nine provinces' of Xia and Shang times (such as 冀州 and 青州), the major states of the Warring States Period (魏, 趙, 秦, etc.), and the territory covered by the Three Kingdoms (魏, 吳, 蜀) of the 3rd century.

The map is similarly replete with references to Chinese history, including the Xia and Shang Dynasties, the Warring States period, the Three Kingdoms, memorably romanticized in the novel Romance of the Three Kingdoms (三國演義), and the Tang Dynasty (618 - 907 CE). Any literate Japanese viewer would have a passing familiarity with this historical and literary background. The Tang period, in particular, was seen in Japan as the absolute pinnacle of cultural achievement, to the extent that many Japanese elites were loath to praise or even mention the Tang's successors, especially the Qing.

At the same time, the map has several odd features, with the most obvious being geographical errors, of which there are many. The cause for some of these is easily understood. For example, the outsized proportion of the Ryukyu Kingdom reflects its importance to Chinese-Japanese trade. Similarly, the size of Korea (朝鮮國) and Hokkaido (here as Ezo 蝦夷) are exaggerated. Other islands or coastal lands depicted as islands here are disproportionately large or small, probably due to whether those areas had engaged in trade with Japan in the past (such as Xiamen).

There are also many anachronisms included, the most obvious of these are Jiangnan (江南) and Huguang (湖廣) Provinces, which existed under the Ming but were abolished in the early Qing (the replacement of Jiangxi province with Hunan, created by the partition of Huguang, seems to result from this misunderstanding). Any city that had served as a capital of a previous dynasty or has some other historical significance is indicated as such.

Even more striking are the map's errors. There are multiple inaccuracies in China, with cities switching places, inland lakes turned into coastal harbors, and mountains in the wrong location. Outside of China, there are even stranger features: some places evidently appear on the map more than once, with landlocked Laos (variously written as 老撾 and 老咼) appearing three times, once near its actual location and twice as islands near bottom. Along with Laos, the islands at bottom are the oddest of all, with places like Persia (波斯) and Arabia (大食國) placed there, near more reasonable inclusions like Luzon (呂宋), Champa (占城國) and Ceylon (セイラン).

These errors were most likely intended. Relatively accurate world maps reached Japan from China in the early 17th century with the Kunyu Wanguo Quantu (坤輿萬國全圖), also known as the 'Ricci Map,' and its successors. Due to the limited but continuous interaction with both Dutch and Chinese traders at Nagasaki throughout the Tokugawa period, geographic knowledge increased over time and prints of world maps were a popular item among Japanese intellectuals, especially adherents of Rangaku (Dutch learning). Therefore, it is likely that the makers of this map maintained the limited geographic knowledge of earlier Chinese dynasties, drawn from texts such as the Da Tang xiyu ji (大唐西域記) and reflected in earlier Japanese maps like the Gotenjiku zu (五天竺図), as an homage, or perhaps to use an 'antique' aesthetic as a selling point.

One final set of features worth noting is the mention of Japanese living abroad (in contravention of the Tokugawa's 'closed country' Sakoku policy) in Fujian and Southeast Asia; for example, 1200 Japanese living in Cochinchine (交趾), 2000 in Cambodia (東埔寨), and so on. Next to Taiwan (here written as 大宛島), the brief rule of Coxinga (國姓爺, known in Chinese as Zheng Chonggong 鄭成功) is commented upon. Coxinga was a half-Japanese merchant-pirate who established an independent kingdom in Taiwan during the Ming-Qing transition and remained loyal to the Ming (in 1683, the Qing invaded Taiwan and crushed the Zheng forces). After his death, he became something of a hero in Japan when his life was dramatized in the extremely popular play The Battles of Coxinga, by Chikamatsu Monzaemon (近松門左衛門). Within the context of the Sakoku policy, urbane Japanese audiences probably gravitated towards the play due to its depiction of China as an exotic foreign land full of adventure. The mention of these limited overseas connections along with the references to earlier Buddhist links with China and Korea complicate the picture of Tokugawa Japan as 'closed' even if direct interaction with outsiders was strictly limited.

This map is attributed to Seitaie̕n (青苔園) based in Nagasaki and Sentanekō (仙胤校) in Osaka (浪華). It was prepared by Chen Songting (陳松亭), presumably a Chinese visitor to Nagasaki, and is dated to 1835 (the 6th year of the Tenpō era, 15th year of the Daoguang Emperor's reign). We have identified examples in the collections of U.C. Berkeley, the University of British Columbia, Brigham Young University (cataloged under the title '朝異一覧'), Meiji University, the National Museum of Japanese History, the Nichibunken (International Research Center for Japanese Studies), and the University of Tsukuba (cataloged under the title '大清輿地全圖'). It is very scarce to the market.

Seitaien (青苔園; fl. c. 1837 - 1850) was a Japanese publisher based in Nagasaki whose surviving works include a map of Asia (variously titled 清朝一統之圖, 朝異一覧, or 大清輿地全圖) and a couple of treatises on fishing. Learn More...