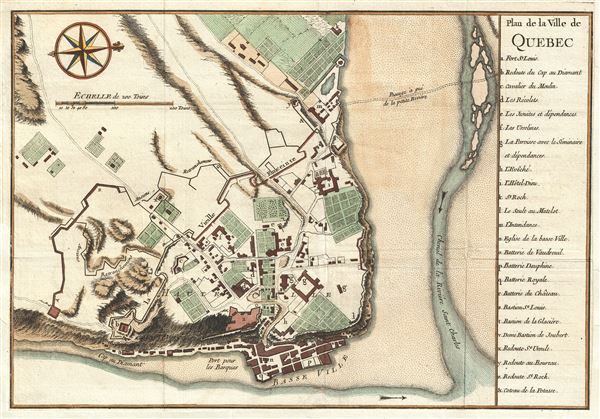 A scarce 1744 first state first edition of Bellin's important map of Quebec City, Canada. Oriented to the west, Bellin's map covers the fortified center of Quebec City at the conjunction of the St. Laurence River and the St. Charles estuary. The map illustrates various fortifications as well as some 24 individual buildings including churches, schools, batteries and government buildings. Some of the surrounding farmland is also illustrated. On the east side of the city the port and is identified.

When Bellin drew this map Quebec City was a major center for the French Colony of Quebec with its strategic location dominating trade on the vital St. Lawrence artery. After the French and Indian War control of Quebec fell to the British. British rule proved both beneficial and magnanimous to the predominantly French population.

Charlevoix's history proved exceptionally influential as one of the most comprehensive works on North America predating the French and Indian War. Copies of the Histoire et description generale were to be found in the libraries of many 18th century luminaries, including Voltaire, Franklin, and Jefferson. Jefferson especially admired Charlevoix work, calling it 'a particularly useful species of reading' that no doubt influenced his decision to pursue the historic 1802 Louisiana Purchase, possibly the most significant event in the post-colonial history of North America.

The present example is the first edition of Bellin's Quebec. It was later reissued in 1763 for Bellin's Petit Atlas Francois and in 1764 for his Petit Atlas Maritime.