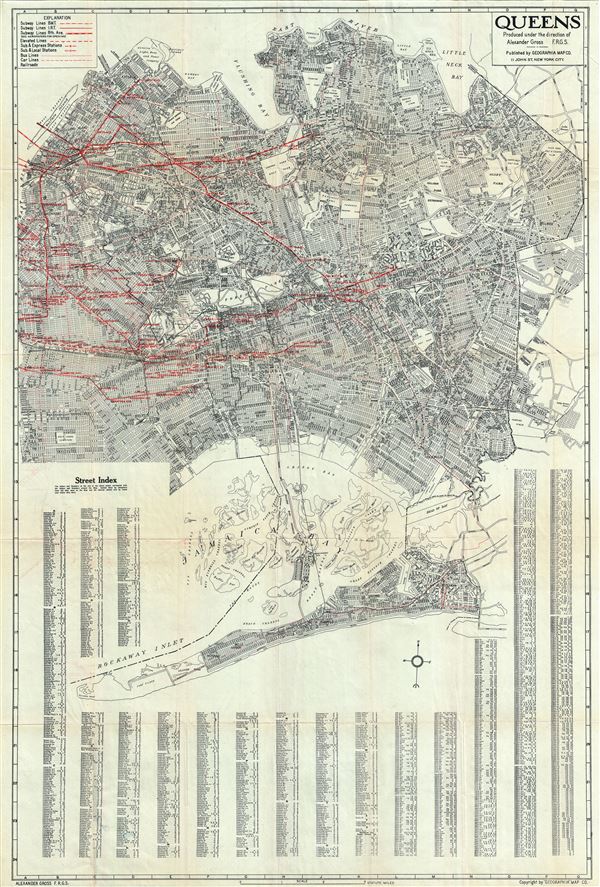 This is an impressive 1930s map of or plan of Queens, New York, issued by Alexander Gross and published by the Geographia Map Company. The map covers the easternmost of the five boroughs of New York City from Rockaway Point (Breezy Point) northward to the East River and Flushing Bay, including Jamaica Bay. Roosevelt Island (Welfare Island) is also included. The map is exceptionally detailed and identifies streets, cemeteries, parks, rivers, bays, marsh land, golf courses and a host of other topographical features. Transportation lines including subway lines, bus routes, and subway stations are identified in red. The map notes the Triborough Bridge (JFK Bridge) still under construction, suggesting that this map was issued in the early 1930s, after construction on the bridge began in 1929 and before completion in 1936. The map also notes identifies Flushing Airport, a now decommissioned airfield. The Jamaica Sea Airport is also identified. The Jamaica Sea Airport was an airstrip in Idlewild that opened in 1927, before the existence of JFK Airport. A street index is included below map proper. This map was published by the Geographia Map Company, New York, under the direction of Alexander Gross, F.R.G.S.