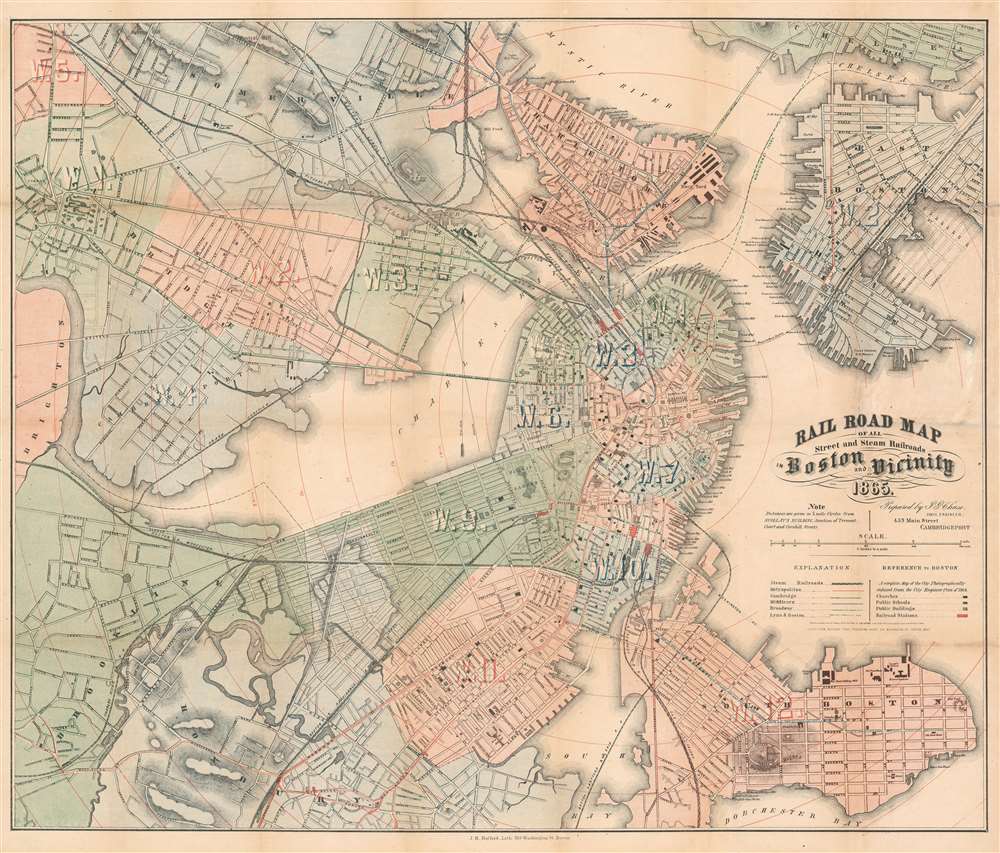 This is an 1865 Josiah G. Chase railroad map of Boston and vicinity. The map depicts the region from Cambridge and Brighton to East Boston and from Chelsea to Roxbury and Dorchester Bay. Railroad lines in and out of central Boston are illustrated in different colors, allowing the viewer to more easily differentiate between steam railroads and streetcars and between the five different streetcar companies. Major intercity railway lines are labeled, such as the Boston and Maine Railroad, the Fitchburg Railroad, and the Old Colony Railroad. Streetcar companies, known as the Metropolitan, Cambridge, Middlesex, Broadway, and Lynn and Boston Railroads, are all illustrated as well, each of which operated streetcars pulled by horses. Electric streetcars would not arrive in Boston until near the turn of the century. Incredibly detailed, individual streets throughout the region are illustrated and labeled, and churches, public school and buildings, and railroads stations are also indicated. These four different types of structures correspond to a key situated along the right border. Other buildings, such as the lunatic asylum, the Navy Yard, and Harvard University, are labeled on the map itself. Red concentric circles emanating from central Boston mark quarter-mile intervals from the intersection of Tremont, Court, and Cornhill Streets. City wards in both Boston and Cambridge are labeled and shaded different colors to allow for easy differentiation.

This map was created and published by Josiah G. Chase and printed by J.H. Bufford in 1865 in Boston. Two examples are catalogued in the OCLC as being part of the collections at the State Library of Massachusetts and the University of Missouri - Saint Louis. An example is also part of the collection at the Norman B. Leventhal Map Center at Boston Public Library.

Josiah G. Chase (December 6, 1819 - July 17, 1903) was an American civil engineer and mapmaker. Born in Atkinson, Maine, Chase was a civil engineer and surveyor who lived in Cambridge, Massachusetts for most of his professional life. He married Susan E. Chase (her maiden name is not known) (c. 1824 - c. 1902) in 1851. Chase published several maps, including a railroad map of Boston and a map of the street rail routes in suburban Boston. Learn More...

Good. Even overall toning. Verso repairs to fold separations and at fold intersections. Verso reinforcement to area along right border. Blank on verso.