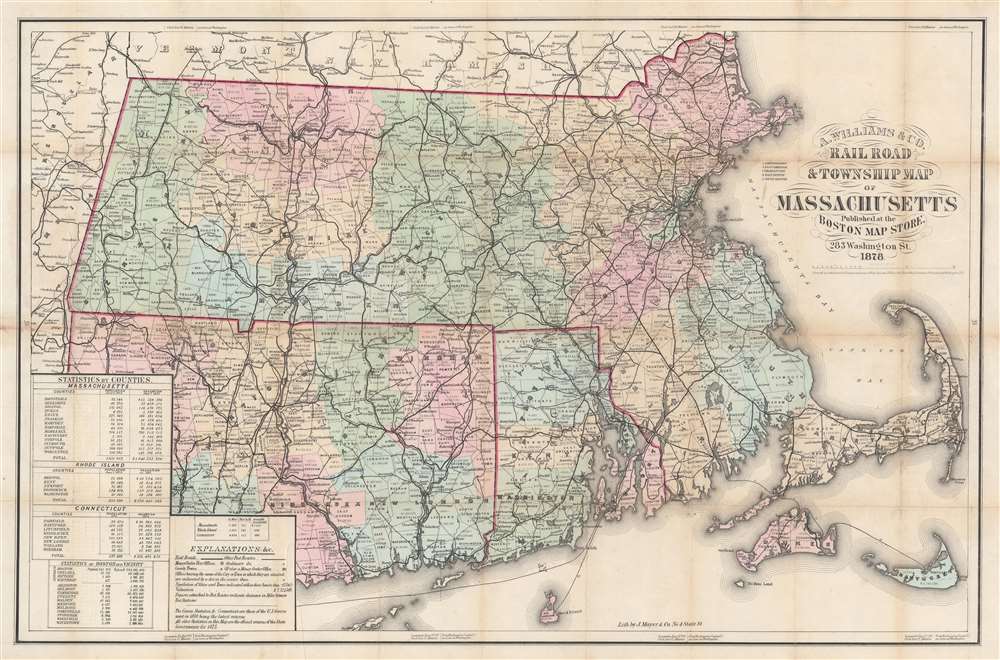 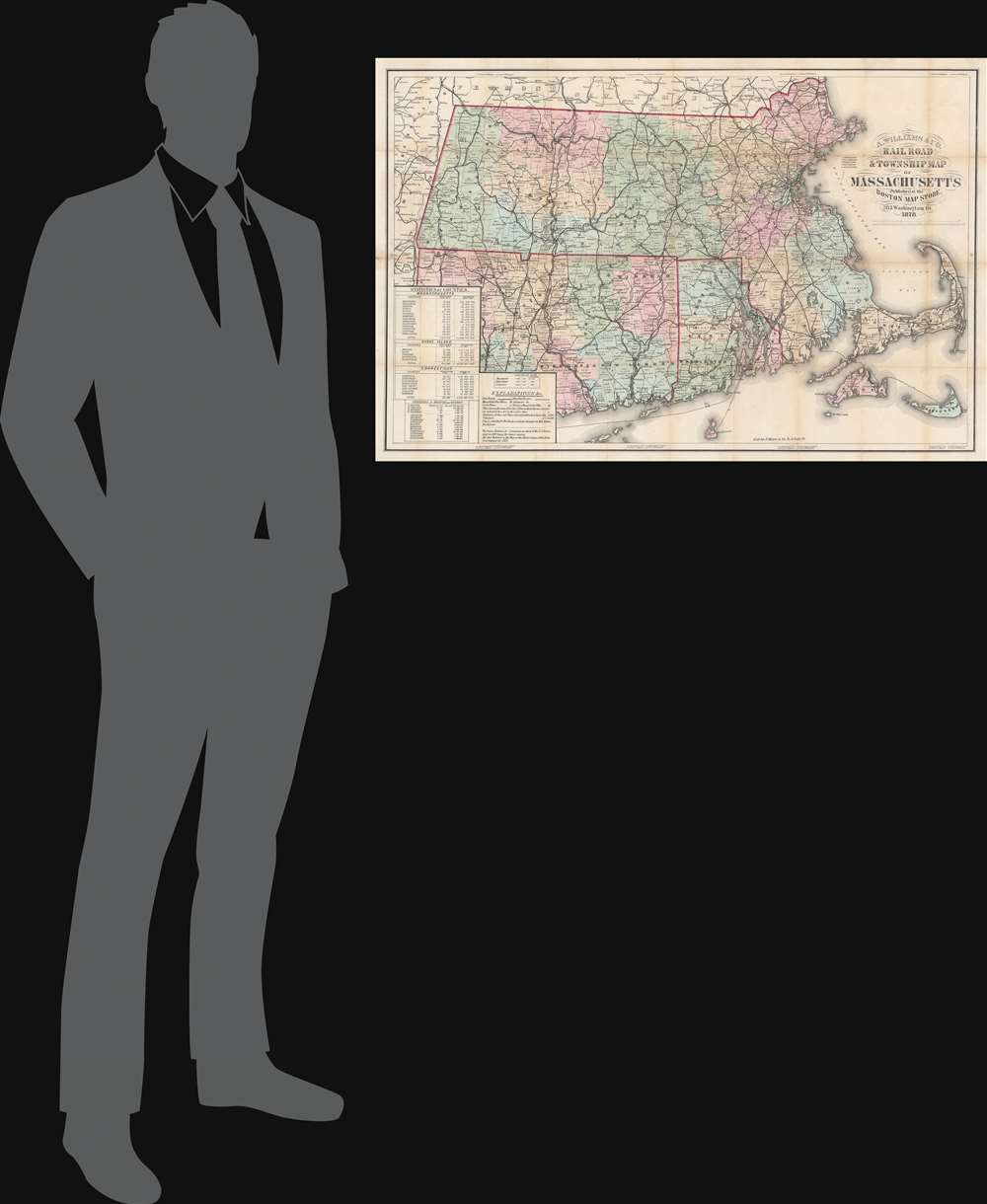 This is an 1878 Alexander Williams township and railroad map of Massachusetts. Bold black lines trace railroads throughout Massachusetts, along with Rhode Island and most of Connecticut. Nearly every railroad is labeled, including the Eastern Railroad and the Boston and Maine Railroad. Counties within all three states are shaded for differentiation. Counties are further divided into townships, all of which are labeled with population provided. Thinner black lines mark post roads with distances. Tables containing population and valuation statistics by county for Massachusetts, Connecticut, and Rhode Island are situated in the lower left, along with a table dedicated to Boston.

This map was published by Alexander Williams in 1878. The map bears an 1876 Cook and Ellis copyright, suggesting that an earlier US edition was published, although we have been unable to locate any examples. Later editions published by Williams in 1879 and 1882 are cataloged in OCLC. We note a single example of the present 1878 edition cataloged in OCLC, part of the David Rumsey Map Collection at Stanford University.

Alexander Williams (August 24, 1818 – January 11, 1900) was a Boston based bookseller and publisher active in the middle to late 19th century. Williams was born near Fort Hill, Roxbury, Boston in 1818, the son of an Episcopalian bookseller, and grandson of Captain Robert Williams. As a young man he was indoctrinated into the book trade by his father and uncle, then the largest booksellers in Boston, who operated under R. P. and C. Williams on Cornhill Square at 209 Washington Street. It is said that the Cornhill bookstore was a popular hangout for luminaries of the period, including Emmerson, Longfellow, Willis, Sargent, Holmes, and others. In 1832 Williams moved to New York in order to expand his knowledge of the book trade under Elam Bliss, a New York bookseller and publisher. In New York, Williams befriended Aaron Burr, J. Fennimore Cooper, Fitz Green Halleck, and Washington Irving, among others. Williams returned to Boston in 1840 to take a position with George W. Redding in the publishing and magazine distribution department of Redding and Company. By 1841, he had become a silent partner in the Redding firm setting up a magazine delivery service throughout New England. By 1855 the newspaper and magazine delivery service became so prosperous that the partners determined to split it off as the New England News Company, with Williams as the head and primary shareholder. Shortly thereafter, Williams left the New England News Company to work again with his father and uncle on Washington Street. In 1869, one of the most iconic bookstores in Boston, the Old Corner Book Shop (27-29 Bromfield Street) became vacant. Williams took it over, operating it until his retirement in 1869. In 1883, he dissolved the old Cornhill Shop, which was at the time a partnership consisting of Williams, C. L. Damrell, H. M Upham, and J. G. Cuppers. Williams lived at 139 Newbury Street, Boston. He died in 1900 of complications relating to pneumonia and advanced age. He was survived by two sons, Alexander Williams J. and Charles C. Williams, and one daughter. Learn More...