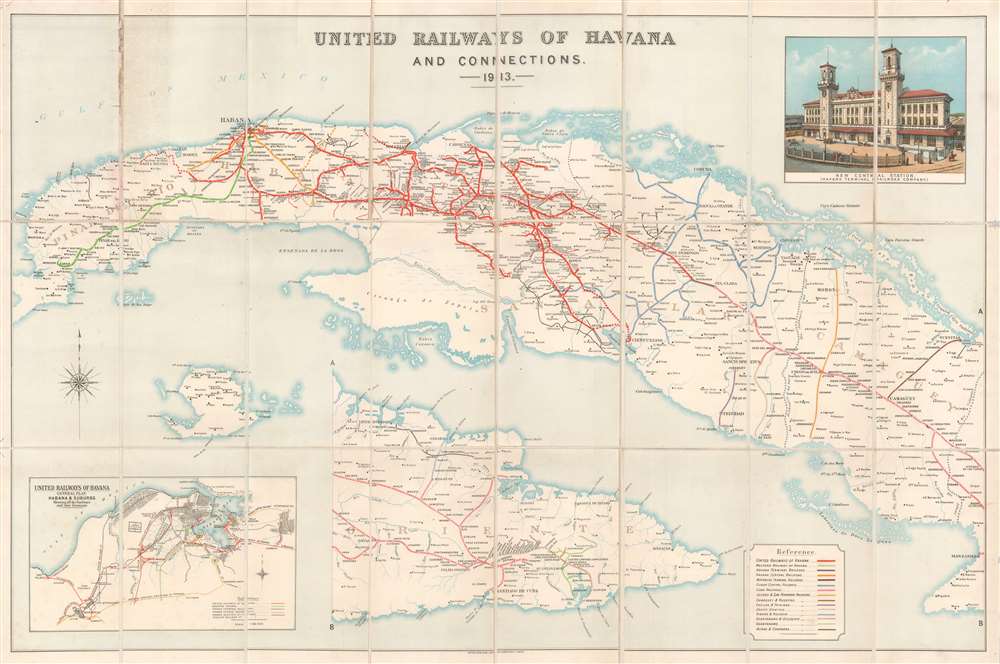 This is a 1913 Waterlow and Sons railroad map of Cuba detailing the British owned United Railways of Havana. Depicting the island in two sections, fifteen different colors are used to illustrate the railways owned and operated independently of one another. A key situated along the bottom border specifies which color indicates which railroad, the two largest of which, the United Railways of Havana and the Cuba Railroad, essentially split the island in half. Stops are labeled along all the railways, with a smattering of towns and villages not connected to the rail network also identified. An inset map situated in the lower left corner details the railway network in the vicinity of Havana, tracing the routes of six different companies. A view of the new railroad terminal in Havana, operated by the Havana Terminal Railroad Company, an American company that was in fact a subsidiary of the United Railways of Havana, is included on the upper right.

The United Railways of Havana

Following the American Intervention in Cuba after the Spanish-American War, the United Railways of Havana passed into British hands. The London-based board passed marching orders onto operational managers in Cuba. When Cuban railroads consolidated in the early 20th century, only the rival United Railways of Havana and the Cuba Railroad Company remained. Their rivalry lasted through the 1950s, until Castro nationalized the railroads in 1960.

This map was created and published by Waterlow and Sons in 1913. Only one example is catalogued in the OCLC, associated with the National Library of Wales. We are aware of one further example in private hands.