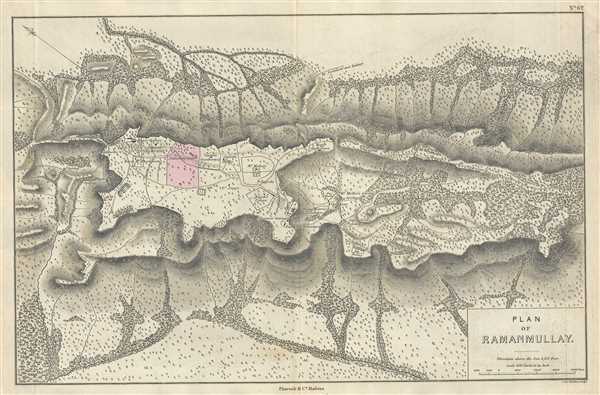 Map of the hill station of Ramanmalai or Ramgad in Maharashtra, India during British rule.
$200.00

This is a beautiful 1854 map by Pharoah and Company depicting Ramanmalai near Sandur town in the Indian state of Karnataka. It covers the hills near Sandur, known as the Ramanmalai block. The map notes beautifully rendered topography of this hill station, along with trees rendered in profile. Various areas, with names of British officers are noted, including Capt. Neill’s garden, Mr. Mellor’s garden, etc. The map also notes the sprints, tanks, ruins, and also a Sanatorium. During the time of British rule, a military sanitarium of Ramandurg was located in the hills west of Sandur, suggesting that the sanitarium noted on this map is the same. Today the region has a number of iron ore mines.

This map was engraved by J. and C. Walker and issued as plate no. 62 by Pharoah and Company in their 1854 Atlas of Southern India.